Anger against Mubarak in İstanbul
A demonstration was held in İstanbul following Friday prayers yesterday in support of the Egyptian people who have been calling for the resignation of Egyptian President Hosni Mubarak for two weeks.
Egypt, Turkey 04.02.2011 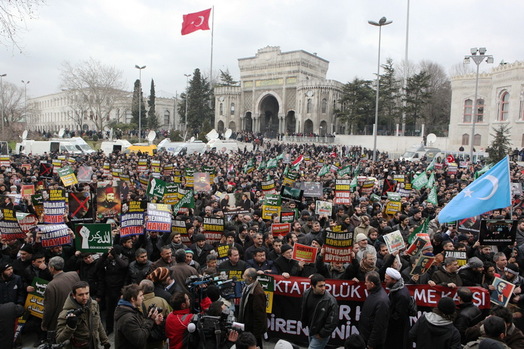 The crowd first held a symbolic funeral prayer for those who lost their lives in the public unrest in Egypt. Then, Quran recitation was held.

Demonstrators burned photos of Mubarak and chanted slogans that said: “Pharaoh Mubarak to give an accounting,” “Enough is enough, Mubarak.” Eşref Abdülgaffar, one of the leaders of the Muslim Brothers also attended the demonstration, which was live broadcast by many local and foreign TV channels.

Many non-governmental organizations (NGOs) including Association of Human Rights and Solidarity for Oppressed Peoples (MAZLUM-DER), the Freedom Association (Özgür-Der), Brotherhood Platform, Anatolian Youth Association attended the demonstration. IHH Humanitarian Relief Foundation President Bülent Yıldırım made a joint statement on behalf of the Solidarity Platform with the Egyptian People which was formed by the aforementioned NGOs.

“This resistance will be a lesson to everyone. The end of the leaders who gave support to the demolishing of Masjid-i Aqsa will be similar to the end of Mubarak. Streets and squares are filled with people in Cairo. The public will take action. Israel, the United States and leader of the Islamic countries that support Mubarak, do not think that the Egyptian people are alone. Not only the squares in Cairo but also many squares of the world are filled with people today. We are on duty altogether. We are beside the Egyptian people altogether. We are at a point where words fail. The fire of the nine Mavi Marmara martyrs has set the fire of freedom,” Yıldırım said. Abdülgaffar who also delivered a speech in the demonstration said: “People in many countries have taken to the streets and said ‘no’ to Israel and the United States. Today is the birthday of the Muslim ummah. Millions are writing a history in Egypt today. Nobody will be able to stand against the rise of the public.”

Following the speeches, prayers were made for the Egyptian people by the leadership of Abdülgaffar. The demonstration ended without any incidents.