Gaza being dragged to humanitarian tragedy
Seven-year-long blockade imposed by Israel on Gaza has paralyzed daily life in the city.
Palestine, Palestine-Gaza 05.12.2013 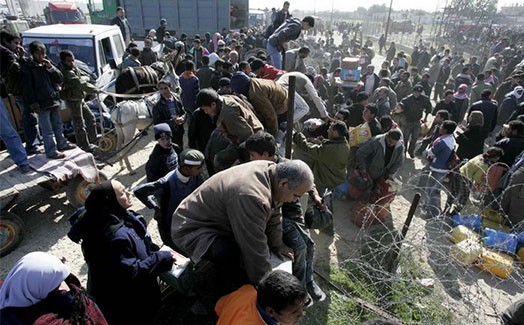 The closure of Rafah Border Crossing following the military coup in Egypt, destruction of tunnels between Gaza and Egypt and the arrival of winter have made Gaza proceed toward a humanitarian tragedy. “Due the destruction of tunnels, hundreds of thousands of people who had jobs are now left jobless. While Gaza’s need for fuel oil was being met from Egypt, diesel fuel is bought from Israel now at high prices. So, electricity plants do not operate. Electricity is given only for six hours to Gaza within a period of 24 hours. Water wells do not operate in the desired level. Sewage systems work only at certain times. While the need for food was also being met from Egypt, food is now being bought from Israel at high prices. This furtherdeteriorates the Gazan people’s purchasing power,” he said.

Kaya also said hospitals are also adversely affected by the current situation. “There are efforts to provide electricity to hospitals with generators but there is difficulty in finding the necessary fuel for them. Most of the surgeries cannot be performed in hospitals and the necessary medication cannot be found,” he said.
Kaya also said the people of Gaza are in a very down mood.

“The current problems lead to disputes among Gazan people. There are fights and conflicts and what is worse is that they have feelings of hatred for the Gazan administration. There are even incidents of suicides due to financial problems.”

Kaya also said entry and exit from Gaza have become more difficult because the border gates have been closed and those who want to go abroad are made to wait for several months.