IHH Humanitarian Relief Foundation organized a March for Free Quds to protest the attack at Mavi Marmara carrying humanitarian aid to Gaza. Thousands attended the march commemorating those who have fallen during Mavi Marmara attack and for Quds.

In the 5th anniversary of the Israeli attack on the Freedom Flotilla on 31st May 2010, tens of thousands of people gathered in the courtyard of Fatih Mosque following the asr prayers to protest the atrocity on board Mavi Marmara. Thousands of people came from different cities in Turkey to join the march in Istanbul. Protesters were carrying IHH, KalimahTawheed and Rabia signed flags as well as signs that read “Mavi Marmara is Our Pride”, “Free Palestine”, “Stop Blockade on Gaza”, “Palestinians Are No More Alone.” The posters that read “Thousand Salam to the Martyrs”, “Palestine Cause is Our Cause” were hanged on the gates of the courtyard.

The protestors chanted: “No Muslim Submits to Oppression,” "We Shall Keep the Legacy of Our Fallen Ones,” "Damn You Israel,”and "Thousand Salam from Istanbul to the Resistance.” Names of the ten people who were killed on Mavi Marmara by Israeli marines have been read out loud and the protestors replied in unison: here! The march started after the recital of Quran. IHH President BülentYıldırım reminded that five years have passed after the attack.

Mr. Yıldırım noted that Israel has attacked Mavi Marmara flagship of Gaza Freedom Flotilla with the best of her commando units. "We were unarmed civilians bringing humanitarian aid and toys to the orphans. The entire world was with us” he said.

UN made a statement. European Parliament confirmed that we were right and Israel’s blockade was wrong. We were not even in the territorial waters of Palestine. Regardless of all these they have attacked us. The attack lasted one and a half hour. If we wanted we could have killed a hundred marines and tossed them to the sea. But as the head of the ship I have ordered: we shall not kill even when we are killed. We have taken the weapons and bombs on them. We have even attended to the wounds of Israeli marines. But they have cowardly fired at us” he described.

Yıldırım has highlighted that Israeli marines have attacked them off the waters of East Mediterranean. "They know that East Mediterranean is the soil of Quds. Islam cannot be without Quds which is a blessed place to be freed. We will recover all the Palestinian land Israel has occupied. We will return one day and you will see that day. Israel we gave you such a present that you will never forget. We made you so lonely and isolated from which you will never recuperate. We have taken Turkey and these people back from you. We shall one day put our heads down in Masjid Aqsa. This is the march for a free Quds.”

March for Quds shall end in Masjid al-Aqsa

Yıldırım asserted that the march for Quds has taken start and it will end in Masjid Aqsa. He also added that the blockade and sanction on Gaza has been going on over the past 8 years. "Netanyahu and his assistants are doing a Hitler-like oppression. No doubt Israeli officials are the offspring of Hitler. What is the difference between Hitler murdering children in Europe and Netanyahu murdering children in Gaza? A silent genocide is carried out in Israel for eight years. People have become cancer; children are born with disabilities due to the weapons Israel has used on them which are not used anywhere else in the world. Moreover, Palestinians are feeding on low-nutrition foods. Israel is destroying a whole generation” he explained.

Turkish citizens’ military service in Israel should be outlawed

According to the cabinet decision issued in 1993,Jewish Turkish citizens are entitled to do their military service in IsraelYıldırım has noted and he advocated that this practice should berepealed by cabinet decision again.

He continued that due to Mavi Marmara attack Israel is being prosecuted for the first time and as a result of the ruling of the court the perpetrators of this crimes is not able to travel to 40 countries around the world. Upon the court’s notification of Interpol about the ruling the perpetrators of this crime will not be able to travel even further than the Palestinian soil that they have occupied.

“I will give good news to Muslims, Christians and especially Jews” he said adding “You will see Zionism destroyed soon. The freedom of all the people from oppression lies in the destruction of Zionism. Jews who are against Zionism will cherish this good news most.”

Yıldırım expressed asserted that Egypt’s first elected prime minister Muhammed Mursi was toppled with a coup d’etat because of his support for Palestine.

Calling out to the members of all political parties before the general elections, Yıldırım said “Do not forget Palestine ever. Palestinians are required to get visa but Israelis are not. Visa requirement should be waived for Palestinians and imposed for Israelis. My friends and I have received death threats from Israel. ‘We will kill you in Turkey’ they said. We believe visa requirement should be imposed on Israelis visiting Turkey,” he suggested.

Noting that Mavi Marmara indeed continues its journey, Yıldırım pointed out that Israel was forced to apologize Turkey which held an honourable stance on the matter.

Yıldırım also highlighted that Kurdish and Turkish people have been killed together on board. He continued that as IHH they are going to support “Resolution Process” because when Turkish and Kurdish people unite the power structures in the Middle East will have to change and those who give up on the “Resolution Process” will be losers at the end of the day.

Struggle for Quds is the duty of Muslims

Civil Servants Labour Union deputy leader Levent Uslu stated that he would like to wish blessings for the souls of those who have fallen on Mavi Marmara and to the soul of the conqueror of Istanbul Fatih Sultan Mehmet as this May marks the 562th year of the conquest of Istanbul.

Reminding that Israel has attacked humanitarian aid ship which did not even have a pocket knife on board Mr. Uslu said "Israel attacking this ship is a sign of her fear. They are afraid of us, of you, of Muslims. Damn Zionism and Imperialism! I condemn all the imperialist whou are complicit in the crimes of oppression all around the world. We will bring those, who after our brothers have been murdered said that Israel’s permission should have been taken, into account. Quds belongs to Muslims. We must struggle until Quds is conquered. Struggle for Quds is the duty of Muslims.” Uslu also called for the cessation of the trade with Israel. 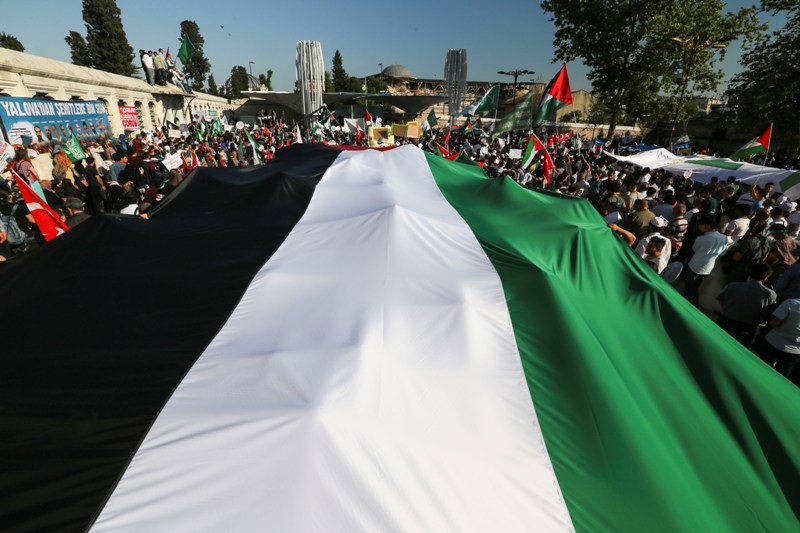 Palestinian Cause is the cause of ours

Journalist and writer Abdurrahman Dilipak spoke thatMavi Marmara is not only a case of humanitarian aid to the oppressed people but also a matter of religion.

Father of Furkan Doğan who was killed by Israeli marines during the attack on Mavi Marmara, Ahmet Doğan said that nobody ever thought that there would have been an attack onMavi Marmara when the ship set sail. He described that his son had got on board with great dreams. "Allah has blessed him with martyrdom. Before getting involved in the filthiness of this world he was taken from this life. Such a blessing is the greatest wish of us all. They are trying to make Gaza forgotten” he said.

Following the speeches the protestors holding “For the Freedom of Quds,” “Mavi Marmara is Our Pride,” signs and pictures of those fallen during MaviMamara attack marched toward the cemetery in Edirnekapı where Abdulmetin Balkanlıoğlu said a prayer. 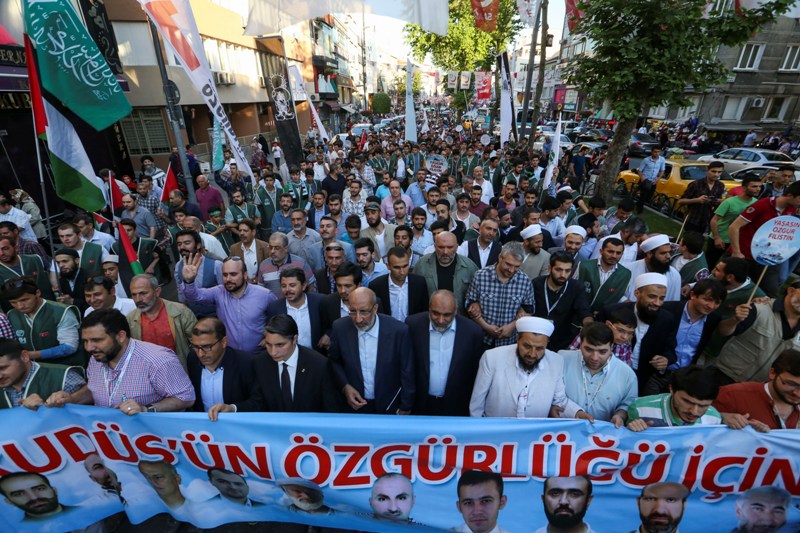