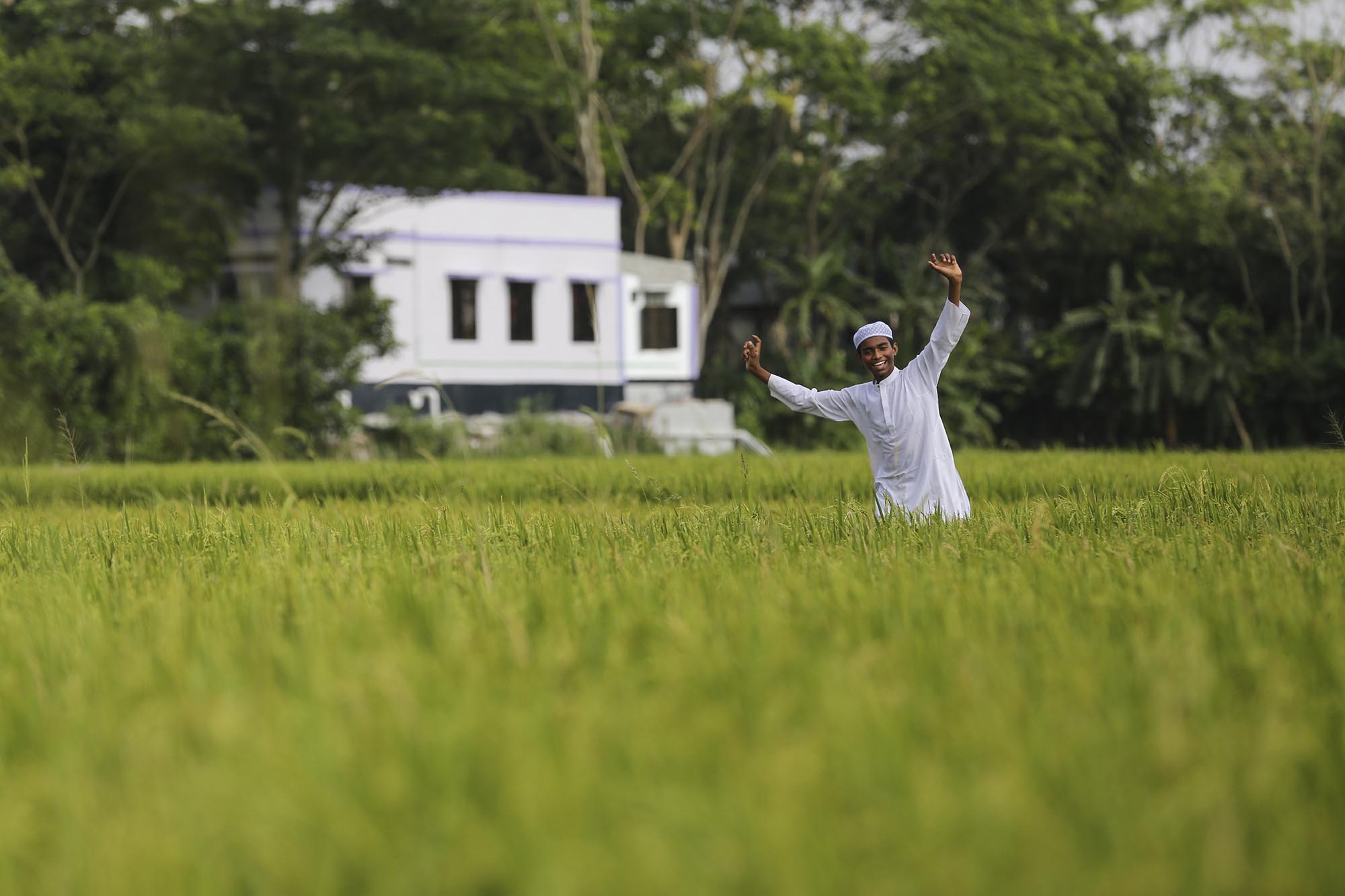 I am far away from home. Perhaps I am writing these as I mover over paddy fields, or over one of these roads where we left our souls. Don’t mind about the distances, or the fact that you are speaking different languages. Only remember this: we are brothers.

I’m in Dhaka. I feel a pair of eyes watching at me as I perform my prayers. When I am done I find him still staring at us in the same position. We are two persons. He was standing there looking at us, perhaps wondering how come these two white men were praying in this dusty, ramshackle masjid. We walked up to him and I asked his name with my basic English. "Rubi" he answered. He had a huge smile on his face when he heard my name. Having similar names was like being acquiantances. After exchanging a few more questions he asked if I was Arab. That’s how he became etched in my mind among those unforgottable people. An undeveloped nation or a nation whose development was prevented knew only Arabs as Muslims. This was only one of the games of sly Britons played on them.

I’m in Gazipur. I am watching the city from behind a window like a bird peering out of his cage. We visit a shelter tucked in the backstreets of the city. It is Sultan Abdülhamid Solidarity Orphanage. I realize from behind the car window that the number of people smiling at usincrease as we get closer to the place. They know us. They await us. When we get off the car a wave of excitement takes over the place. Something that we can’t figure out its meaning but feel at when we look at their faces. We witness and rejoice the words uttered by an orphan who learned Quran by heart.

I’m in Kurigram. We are in the opening ceremony of Esma Biltaci Orphanage. The village folk greet us in this event which is the most crowded among the ones we have attended so far. The event has been announced many days ahead. Although I couldn’t notice it at first hand when I am seated at the stage I realize that this is the most multi-ethnic audience I can possibly see in this region. I watch a child who is holding a belloon as he stares at his surroundings in amazement, and a sad but smiling mother  who knows the reason of our visit. They convey so much meaning without ever speaking. I have met an orphan as such who can express so much without uttering a word.

His name is "Mahmudü’l-Hasan". He was praised for his good looks and good morals as in his name. He was sitting on the lower bunk bed by the window in his room. I walked up to him. I sat down by his feet which couldn’t reach the floor but kept dangling in the air. I could only manage to ask his name and how he has been. Our conversation could not go beyond that. I gave a small present that I brought along with me. The gratitude in his eyes was much bigger than that tiny gift can contain. I took off his prayer cap and patted his head. And gave him a big hug after kissing him on the forehead.. When I got up to take my leave I reached out my hand to him to wave goodbye. Instead he pulled out the tiny gift package to give it back to me. Yes, I sometimes ponder on these things. How do we return from this innocence?

I’m in Thakurgaon. We hit the road in order to heed the call to the hoouse of Allah on earth. In the distance we make out the minarets of Hajah Hasibe Mosque ready for the opening ceremony. The mosque in blue with pink embellishments stands out from the rest of the uncoloured houses in the plains and looks like a child in new outfits for eid. After cutting ribbons, taking pictures  and the program I find myself perched on an ottoman in a one-room house under the bamboo trees. I watch around myself with curious eyes as new fruits keep coming to the table before me. Sister Kalthoum keeps standing next to me to get me anything in case I ask for something. She hosts us in her mother’s house and insists that we visit her own house too. Her husband, children, siblings, father and grandmother. She introduces us to all of them as if she has been waiting for this day all her life. With the spirit of a child, so beautiful. She has a big smile on her face and she keep turning to me in each step to tell me “I’m happy” as she holds my hand. I just don’t want to be anywhere else but near her. We perform our prayers next to each other on one single prayer mat in her house. Our commong ground is where we stand. It is an unknown country, people we have never met, a language we have never heard. There is only one commong thing: the direction of our prayer mat.

I am writing these lines nut as Rabia who is waiting for her flight back to Istanbul but as Rabia who believes that she will be back to this spice-scented country again one day to pray together with Rubi who watched as I prayed, to hold Mamduh al-Hasan’s hands and fill his smiles into little gift wraps, to knock on sister Kalthoum’s door and give her a big hug to say that “I’m happy.” And to reunite with orphans again.