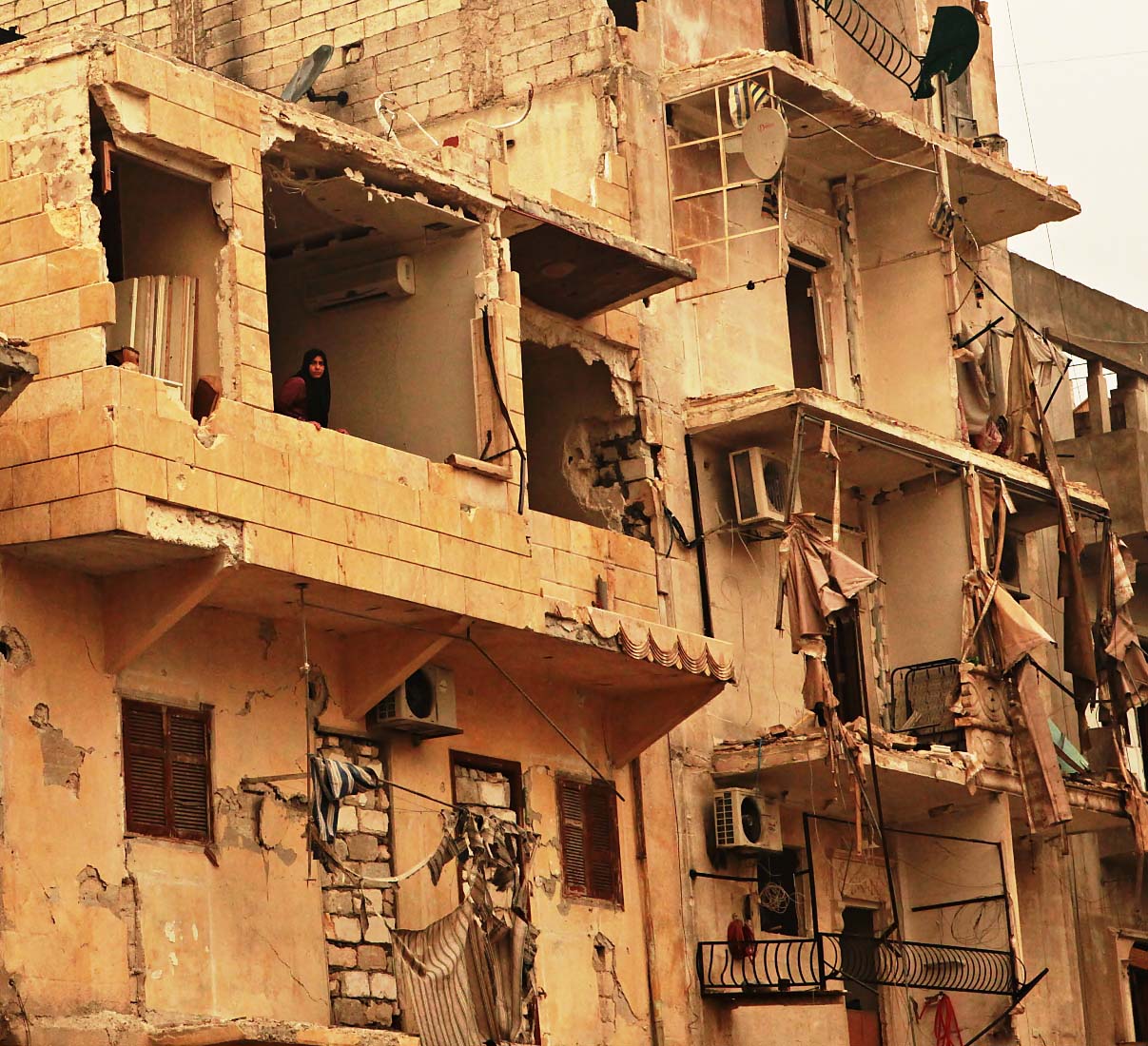 I never left here. Almost all my neighbours left but I stayed on. I had to. There were people whom I needed to help.

Dozens of youngsters arrive every day. I take care of them individually. To see them in that condition reminds my own children. I cannot leave here. Some of the young men who arrive here would be in critical condition and die in a couple of days. Those who survive are sent back after they recover a little bit. Because daily around 50 wounded arrive in the hospital where I work and we simply do not have enough space. When the conflict escalates or the city centres are hit we receive much higher number of injured people. People with regular illnesses do not come to the hospital at that time. Hospitals would be full with the injured.

Part of the hospital is built underground. Because hospitals also get hit. Not only hospitals but also bakeries and markets are bombed. Therefore we should be prepared for all kinds of things. Sometime in the middle of the night there is a knock at my door. They come to my house first because the hospital is far. I am only a nurse. After the war broke out I have received training in order to be able to act in emergency situations. I am doing my best.

This is my youngest son. He barely walks. Because a bomb exploded close to him and his legs were injured. My other son is in the next room now. But there is no way you can see him. He would never like to see you and would make trouble. He has been like that for a while now. Sometimes his hands shake and he loses it completely. He is only 21 but he is no longer a normal person. We cannot talk to him.

In the beginning of the conflict he and his older brother were prisoned for being against the regime. They have remained in prison for years. Later they have released my younger son based on a deal. The deal was to give a certain regime soldier’s dead body in return of my son. But he was no longer the son I used to know. He was imprisoned in concrete cells and continuously tortured. He had listened to the cries of his brother who was also being tortured for days. It is what caused his unstable condition today. One day his brother’s cries stopped. When he asked what happened to him they answered that his brother died. They had killed my son with torture.

He keeps waking up in his sleep these days. He keeps hearing his brother’s cries in his sleep. He no longer laughs or talks. You know he used to be a very cheerful boy. He would always help people, keep making jokes and laugh. He is a totally different person now. They ruined him.

… A nurse, called Fatma, told me all this a couple of weeks ago. We were in her house in Idlib, Syria. I was taking notes sitting next to a heater that does not work as I was listening to what this brave nurse was telling me. My eyes were on the ground mostly. I was hearing her sobbing as she told how they tortured her sons. But I was not able to raise my head and look into her eyes. My heart was torn into pieces and I was filled with rage as she told her story. One of her three children was killed by torture, the other was no longer mentally stable due to torture, the youngest was injured in the leg during a bombardment. When I raised my head I have seen the lamp hanging in a nook on the wall. Residents of destroyed cities use gas lamps or searchlights. The youngest boy of the house brought in tea while limping as he walked. He must be around 15 years old. He had a hard time walking due to the damage of shells on his legs. His mum was treating him. According to her his walking was going to improve day by day. She was working in a hospital as few miles away. She was attending to the young men injured in the battlefront or civilians wounded in the shelling of their houses.

We did not dare talk for a while after we left that house. We were not in a condition to talk. We made our way back passing through destroyed alleys and neighbourhoods. Life would sometimes flow in its usual speed and sometimes become lonesome. Locals have dug up shelters next to their houses or gardens. Each household had a walkie-talkie through which they would warn each other against approaching dangers. However they were quite calm as the bombardment news streamed in from those walkie-talkies unless they get the news that a warplane or helicopter was nearby. Then those who are out and about would hurry back home and those who were home would go down to the shelters. Nonetheless these shelters were able to protect them against barrel bomb’s damage. If we get hit by Russian planes these shelters will become our graves, said one of our hosts in a house we visited. There was no way to get away from the bombs that Russian planes dropped. Not only Russia but 13 different countries bomb Syrian territories and kill civilians most of the time.

The houses were no more than ruins in the areas where the clashes were very violent. When we were passing by an area of orchards and gardens we stopped the car. There were olive orchards and cultivated farms around us. We left the team and started a short walk among the olive trees toward the village nearby with my friend Emre Karapınar. It was the last hours of crimson afternoon sun. We walked past by children playing in the doorsteps of one-storey houses. We could forget that we were actually in Syria if it were not for the things we have witnessed during the day. We were quite far from the car as the sun set down. We could see our teammates waving at us and warning us to come back. They wanted to hit the road before it got dark. It was so dangerous to be around here at night. Warplanes that we could only hear would start hitting civilian areas. We had three more hours ahead us until we reach Turkish border.

Indeed I knew how it felt to be in Syria at night. Two years ago I stayed one night in Aleppo. I have slept on a mattress laid on the floor of a cubicle in a building, which was once a bank. The deserted bank headquarters used to serve as the communication centre of a local news agency. They were making news in order to tell the world what was happening in Syria. They have chosen this particular place because industrial zones were getting less than other places. Nonetheless the sound of warplanes and bombs never ceased at night. One could see a vast area from the top of the building where we were staying. We had sat down with war correspondent Samet Doğan and watched the city through the night. Aleppo was in the dark. The flickering lights in the darkness was coming random cars. They would turn on the headlights for a moment only to see what’s ahead of them and turn it off immediately. Because warplanes, which could freely fly above the city at night without the risk of getting hit, would bomb anything that moves. No wonder Aleppons would rush home before sunset. Regardless of knowing all this, we once got late and had to travel in the evening. We could barely see another car on the road. The driver was speeding up to 80 kilometres per hour and turning on the headlights for a few seconds every minute. I never felt so close to death. I thought the chances of getting into a car crash were higher than getting hit by a bomb that moment.

Syrian war turned many cities into rubble. The historical souqs where once people used to stroll and do shopping, the hospitals where they used to get treatment, and even mosques are destroyed. Before the war the population of Aleppo, the country’s second largest city, was over 4 million. The city, which boasts 4,000 years of history, now accommodates less than 400.000.

Back then there was armed conflict in Aleppo but it was not as horrible as it is today.  People used go on with their lives in the marketplace and downtown while violent clashes happened elsewhere in the city. I have seen the old souq which turned into rubble, and walked down its ruined alleys. The Umayyad Mosque in Aleppo was partially burned and destroyed. The rebel fighters have covered the facades of certain historical buildings with sandbags so that they don’t get damaged during the clashes. Nonetheless the historic sundial embedded on the wall has been riddled. The city was divided into two as if an invisible line was crisscrossing Aleppo. The regime soldiers were only a few hundred metres away. Still we wanted to step into the mosque. In order to avoid snipers we used to stop at certain points and then cross running one by one. Samet told me that sniper would see the first one crossing and take aim while the second one is crossing and shoot the third person who crosses. Although this may sound like a joke I have realized that I tried to avoid being the third person crossing a risky place. A photographer who was with us parted his way after a certain point. We have nonetheless decided to go on. We had already passed by the sections of the mosque that were burned by the regime forces and were in the middle of the courtyard which was lit up by the afternoon sun. It still looked so beautiful. We performed asr prayers among the ruins of the mosque and headed back. We were using the same method and being extra careful. At some point our guide suddenly grabbed Samet in the arm and pulled him back. He then showed the bullet holes on the spot Samet was about to step on. He warned us to follow him at each step and avoid using the shortcuts that we think safe. According to him a few people were shot at the very spot Samet was about to walk on as the place was within the sniper’s field of view.

I have later on visited Syria several times. I have witnessed the giant refugee camps set up at the border get bigger and bigger gradually. The plains, which were once nothing but olive orchards, became shelters of refugees. The refugee family which found shelter under an olive tree would later find a tent and start living there. As the Asad regime and his allies started hitting those places people started to move to the border. As the bombing of the cities escalated the tent cities got bigger. Today only in Syria 300.000 people are living in those tents. With each bomb dropped on the cities a new wave of refugees start and tent cities grow bigger.

How can 300.000 people live in tents? How can they protect themselves from the cold in the winter? How can they find food? How can children go to school? How can they find electricity and water? How can they treat their sick? Believe each is extremely difficult. However there are people who are putting their efforts to make it happen. I do not mean to talk about this. I would like you to see Turkish people’s aid efforts, IHH’s hundreds of staff and food warehouses and the life down there. You can do that. One day set out to visit the camps and look in the eye of these refugees.