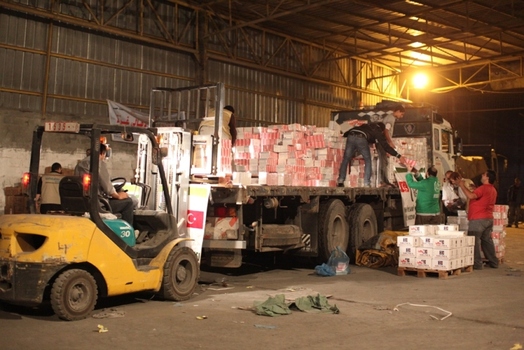 An IHH aid team provided the necessary medicine which was about to run out in Gaza from Egypt and brought them to Gaza from the Rafah border gate.

The medicine which has a worth of $200,000 was submitted to the officials of the Gaza Health Ministry. The medicine will be delivered to the hospitals in Gaza as soon as possible. Following the announcement of a ceasefire, life in Gaza has begun to return to normal. While shops have opened in the city, children have begun to play in the streets for the first time after days.

When the Israeli strikes were going on, people in Gaza were not going out unless very necessary and it was impossible to find even a single person in the streets when it got dark. Following the 10-day-long strikes in Gaza, a ceasefire was reached but Gaza was seriously damaged by the Israeli attacks. Gazan people have taken action to heal their wounds following the announcement of the ceasefire.

IHH, which has been making intense efforts in the region for a long while, is continuing to take relief, donated by Turkish charity givers, to Gaza.

The medicine was brought from the Rafah border gate. The medicine, which was handed to the Health Ministry officials, will be sorted out and then delivered to the hospitals in Gaza as soon as possible.