“3 permanent works in Niger” are completed!
IHH Youth has just opened the Rezan El-Najjar Healthcare Center, Mus’ab Bin Umayr Primary School and Omar Muhtar Mosque as a part of the “3 Permanent Works in Niger” project from which thousands of people will benefit.
Africa, Niger 21.11.2019

On top of the humanitarian aid operations carried out all around the world, IHH Humanitarian Relief Foundation continues to be a ray of hope for the victims of disasters and oppressed people with its permanent work projects. IHH maintains to construct healthcare centers, schools and mosques for the oppressed living in different geographies. In this regard, IHH Youth has completed its “3 Permanent Works for Niger” project launched with the support of our charitable youth. The Rezan El-Najjar Healthcare Center, Mus’ab Bin Umayr Primary School and Omar Muhtar Mosque were opened to mark the completion of this project. IHH Youth Chairman Abdullah Muhammet Islam who traveled to Niger to launch these permanent works, thanked the youth who, despite all the difficulties, made it possible to complete the project in just 5 months by dedicating themselves for the construction.  Summarized details of the project are as follows:

“We completed our “3 Permanent Works for Niger” project with the efforts of our IHH Youth provincial administration and parties including university, high school and secondary school students, working youth groups and the IHH Child department. Our colleagues contributed to this project at times by organizing charity sales, book sales and opening fruit stalls in their schools; and other times they supported this project by donating some of their pocket money or even by selling coffee. And as a result, we can now open these buildings to serve the people of Niger. When we tried to come up with the names of the projects, we wanted to show our loyalty and gratitude to our history. In view of this, we named our healthcare center after the 20 year-old Rezan El-Najjar who stood up against the Israeli oppression and was martyred when she was treating a wounded victim in Palestine; we named our school after Mus’an Bin Umayr, our martyr who was the first teacher to migrate to Medina, and our mosque after martyr Omar Muhtar who touched the hearts of the youth with his fight against the imperialists in North Africa and turned his home into a mosque where he taught the local children there.”

As healthcare conditions in the region are appalling, patients that can ideally recover with the simplest medical treatment were unable to regain health. And due to the absence of units to provide services for pregnant women in this area, potential complications during birth were unavoidable. With this healthcare center, vaccinations, medical treatment and first aid services can be employed without difficulty. Services provided at the center also mean that babies’ health will hopefully improve. The significance of The Rezan El-Najjar Healthcare is so great since the center is the only place that provides a delivery room in the region.

The Mus’ab Bin Umayr Primary School was constructed in the Flankey Bery village, 25 km away from the capital Niamey. Through this project, we aimed to provide a sounder and higher quality education for Muslim children who were previously unable to receive the necessary education due to financial difficulty. Before the Mus’ab Bin Umayr Primary School was built, the only school that could be found there was an impoverished building made of reeds and trees. 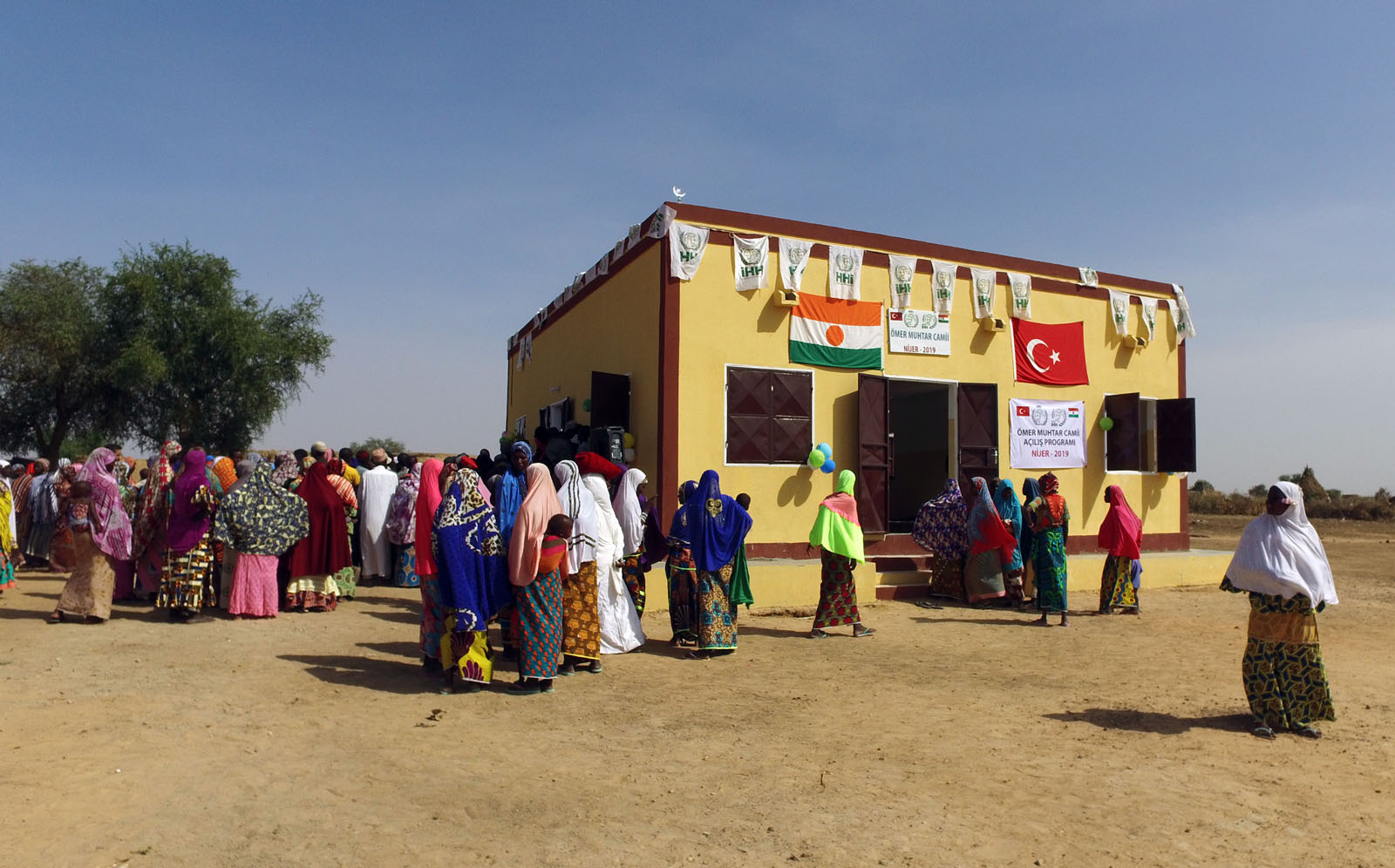 Like the Rezan El-Najjar Healthcare Center, the Omar Muhtar Mosque was also constructed in the Dounbou Bangou village, Tillabery city, 150 km away from the capital Niamey. With this project we aim to strengthen the ties of brotherhood between the different tribes and continue the tradition of solidarity in Niger by spreading the mosque culture in the region. In addition to the mosque, we also aim to make other places to promote Qur’an education among the people of Niger.

Related news
See all
The names of the four youths will live on in Chad
IHH opened water wells named after Kağan Tığlı, Murat Can Kaya, Yusuf Taha Göktaş and Tarık Kesekçı that lost their lives in a tragic car accident on the journey to the Technology Camp in Bursa.
Bursa, Water Wells
08.12.2021
Children are to delight with the Toy Day
IHH declared 7 November as “Toy Day”, a day when various toys were donated to deprived and orphaned children in Turkey.
Istanbul, Izmir, Orphan
06.11.2020
“3 permanent works in Niger” are completed!
IHH Youth has just opened the Rezan El-Najjar Healthcare Center, Mus’ab Bin Umayr Primary School and Omar Muhtar Mosque as a part of the “3 Permanent Works in Niger” project from which thousands of people will benefit.
Mosque-Masjid, Education
21.11.2019