Aid Convoy of 45 trucks from Turkey to Syria
The third aid convoy named "The Pulse of Life to Syria" is setting off.
Syria 24.12.2013 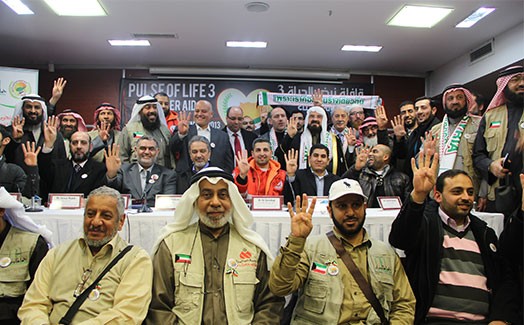 Before the aid convoy set off to Syria, a press conference was held in IHH’s Office in Istanbul with the participation of IHH’s President Bulent Yıldırım, Vice Chair of Syria Provisional Government, Secretary General Ali Qaradaghi of the International Union for Muslim Scholars, Former Arab League Observer Anwar Malek, General Coordinator Dr. Bassam Azaviha of The Global Campaign to Support the Syrian people and many state representatives and prominent names from the Islamic and Western world.

By thanking for the support, Secretary General Ali Qaradaghi of International Union for Muslim Scholars said, "We started to this effort with 65 associations and as the Union of Muslim Scholars, with 85 members we are seeking to spread this movement to everywhere of the world.”

Qaradaghi thanked to IHH and the Turkish government in particular and continued:

“Firstly we have to train ourselves, and provide advice to each other. Certainly if we advise to and correct the mistakes of each other, we can then stand up and be more helpful. Since the Second World War, there have been labors against Islam and Muslims to be destroyed. Conversely, we should firstly train ourselves, desires. They are attacking us by their any means. They don’t hesitate to set traps by their media, politics, wealth and powers. Thus we must be careful, and fight against all of them.”

"They became United with the government against Morsi. They have fallen into a worst situation then what they were already in. They have enacted a separation amongst Muslims."
Other participants who also spoke at the conference, thanked to IHH and Turkey for their assistance and called out for unity of the Islamic world.

Aid Convoy of 45 trucks which will depart from Reyhanli, included 2 million pounds worth of blankets, winter clothes, baby clothes, baby food and prepared food packages to be delivered to Syria's urban and rural places.