Air cargo load of relief materials reach Gaza
The relief materials sent to the Gaza Strip with air cargo on Monday has arrived, raising the quantity of aid delivered to Gaza by the IHH Humanitarian Relief Foundation to 51 tons.
Palestine, MiddleEast 07.01.2009 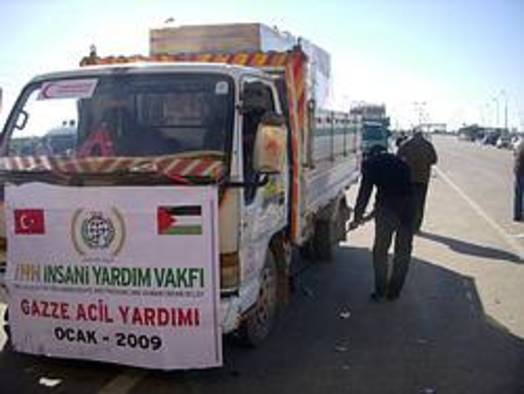 The IHH is working incessantly to extend aid to Gaza, where more than 800 people have been killed in Israeli strikes. The humanitarian materials sent from Turkey have met basic needs of Gazans, though to a certain extent. Medication, medical equipment and powdered milk are particularly significant to prevent further deaths.

The aid materials sent by the IHH were loaded to seven trucks at the Egyptian al-Arish airport and transferred to Gaza through Rafah border crossing. The aid packages containing powdered milk, canned food and medication were handed to the officials from the Palestinian Health Ministry.

With the 38 tons of aid stuff lately delivered to Gaza the quantity of the aid materials IHH sent to Gaza reached 51 tons.

Within several days after the outbreak of the strikes, the IHH sent to Gaza medication, medical equipment and foodstuff worth of $130,000 and donated $130,000 to the families of the killed and wounded in cash.

In later days, 13 tons of aid materials such as medication, surgery tools, painkillers, bandages, injections and etc. were handed to the Palestinian Health Ministry through Rafah border gate and 500 families were distributed foodstuff and blankets.