Arakanese Refugees Elated
Arakanese refugees living in Kutupalong region of Bangladesh, one of the poorest countries in the world, are elated to have received the food aid delivered by IHH (The Foundation for Human Rights and
SouthAsia, Myanmar 30.03.2010 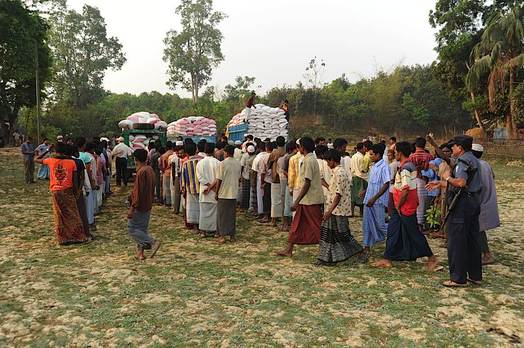 Trying to survive under very poor conditions in huts, Arakanese refugees are relieved by the arrival of aid from Anatolia. They were delighted by the sight of rice in bulk bags, one of the staple foods of the Arakanese.

Said Demir, Aid Coordinator of IHH, noted that 50.000 refugees live in Kutupalong refugee camp and more asylum seekers are on their way to the region from Myanmar. Pointing out that the camp has been formed in the last 6 months or so, Demir also said that it is very hard for these asylum seekers coming from Myanmar to survive under these living conditions.

Mentioning of over 100 people died of hunger, Demir also said “It was a tragic event, we have decided to act and have delivered our aid.” He continued “This camp is patrolled neither by the UN nor by any other aid organizations. We, as IHH, delivered aid to 10.000 families in this refugee camp, 1 bulk bag (50 kgs) of rice to 5 families, that is. 50.000 people has received food aid by our campaign making 10 kgs of rice per one family.”

Arakan (Rakhine), a region within the national boundaries of the Union of Myanmar, is home to a Muslim population of 4.000.000. Half of these people had to evacuate their lands in Myanmar due to oppression. Most of the Arakanese take refuge in Bangladesh. 600.000 Arakanese refugees, trying to survive in Bangladesh, do not have official identification papers and work permits. Most of the time they do not have access to basic food in refugee camps.