Aid to more than 1 million Arakan people in one year
IHH Humanitarian Relief Foundation has delivered aid to 1 million 232 thousand Arakan Muslims who fled from the oppression and persecution that escalated in August 2017. IHH will continue its aid activities in the region.
Arakan, Bangladesh, Myanmar 06.09.2018 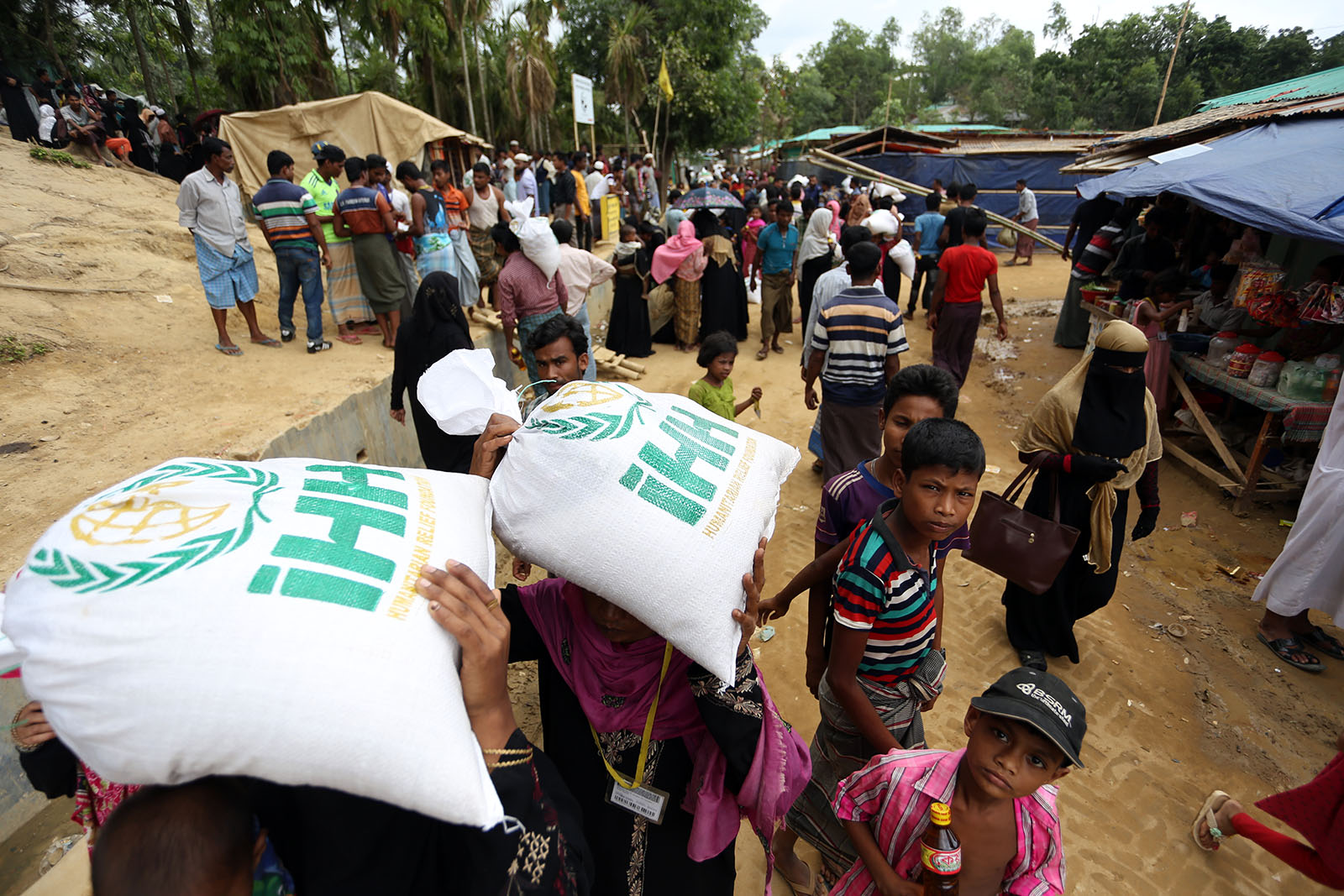 The Rohingya people, who have been constantly subjected to persecution for more than half a century, are continuously forced to flee from Arakan. The most recent, unprecedented migration wave that began in August 2017 reveals the magnitude of persecution in Arakan. Since the last crisis almost 800 thousand people were forced to flee to Bangladesh. With this migration, the number of Rohingya people living in Bangladesh has now reached 1 million 300 thousand.

Since August 1996, IHH Humanitarian Relief Foundation has been carrying out aid works for Arakan. Since August 2017 until August 2018, 1 million 232 thousand people in total have benefitted from IHH’s Arakan aid works in the region. Throughout the crisis, IHH has provided aid to the Arakanese including food, water, hygiene supplies, clothing, healthcare, shelter, rehabilitation and also winter aid as a part of our winter operations. Aid was distributed in Bangladesh, Myanmar and India. 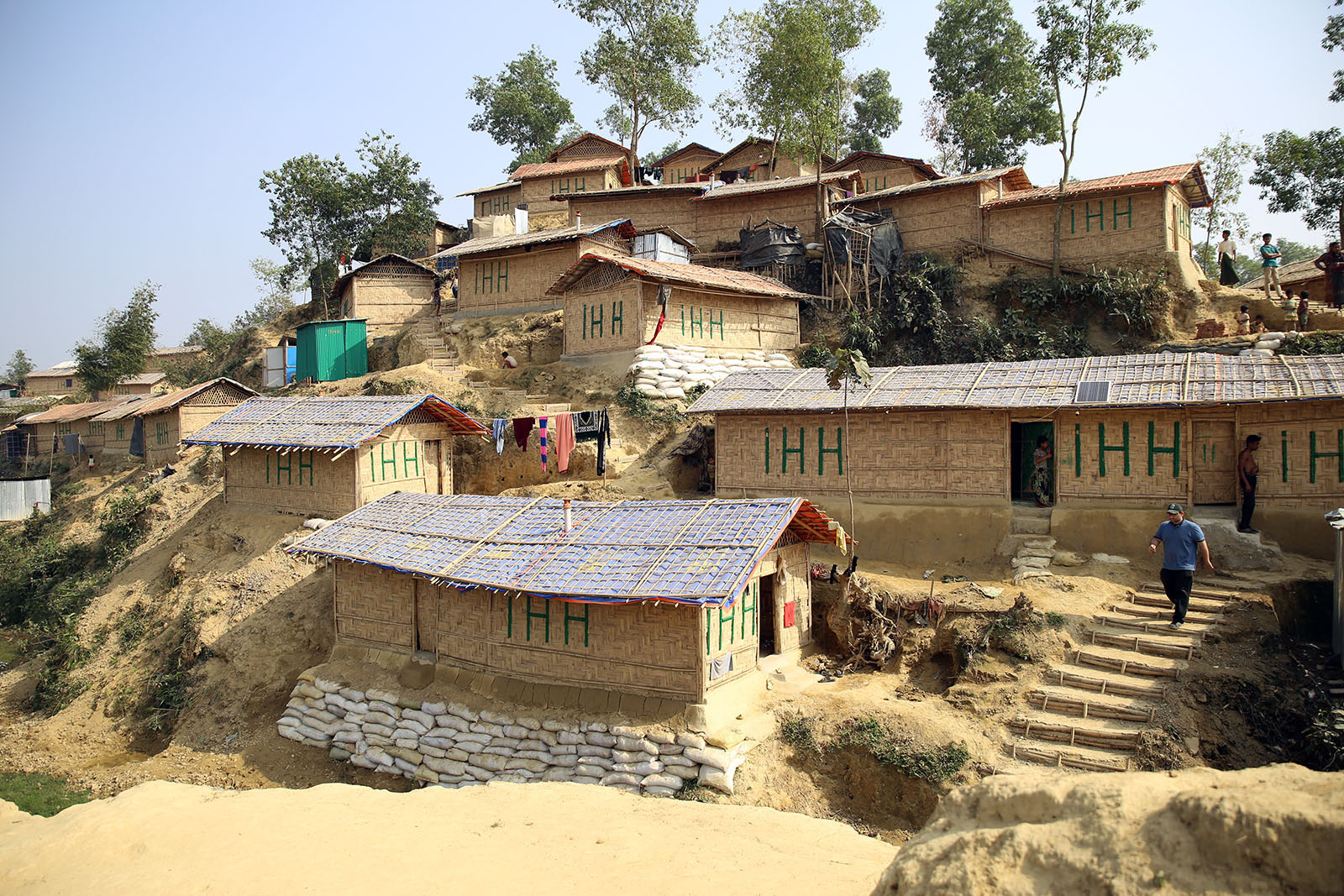 Our activities, particularly in scope of shelter, have brought great relief to the Arakan people. Until the present, we have built 7 thousand 432 homes in the region. These homes that are built from bamboo were also installed with solar panel systems. With the installation of these systems, this provided the Arakanese with both electricity and light. Before they were forced to flee from the country, the Arakan people were living without of electricity in Myanmar. International organizations that come from all over the world and carry out aid activities in the region failing to materialize such a project, distinguished Turkey’s aid organizations from all the others. While none of the camps in the region had electricity or lighting, with the solar panels systems these camps were provided with light.

With the support of our donators, IHH plans to build another 5 thousand 568 bamboo houses, bringing the figure to 13 thousand homes in total. IHH is also materializing projects for walkways, stairs, green areas and garbage collection in the areas these homes were built. These homes constructed by IHH were displayed as sample homes to other NGOs that carry out aid activities in the region by the International Organization for Migration (IOM), an organization related to the United Nations. 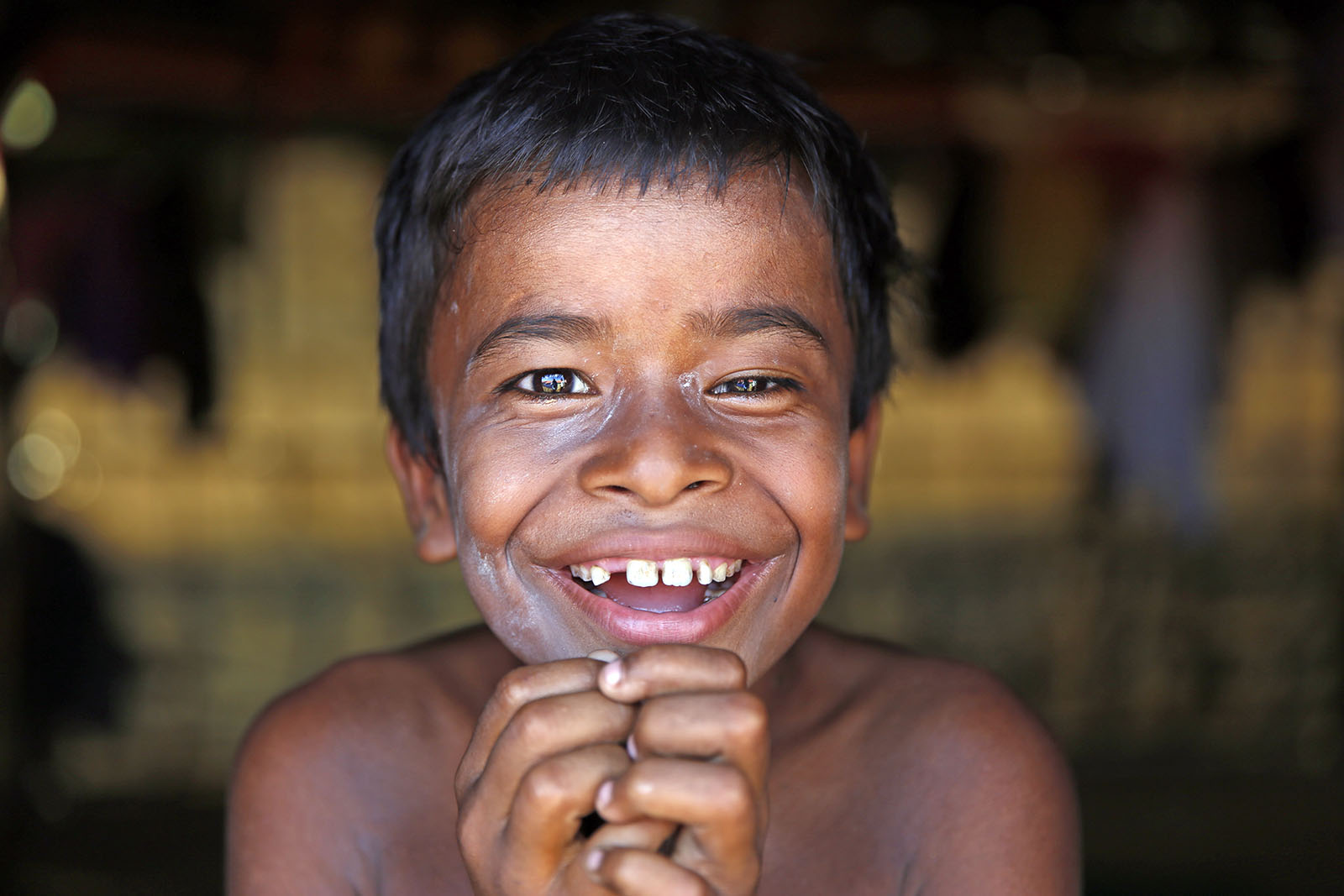 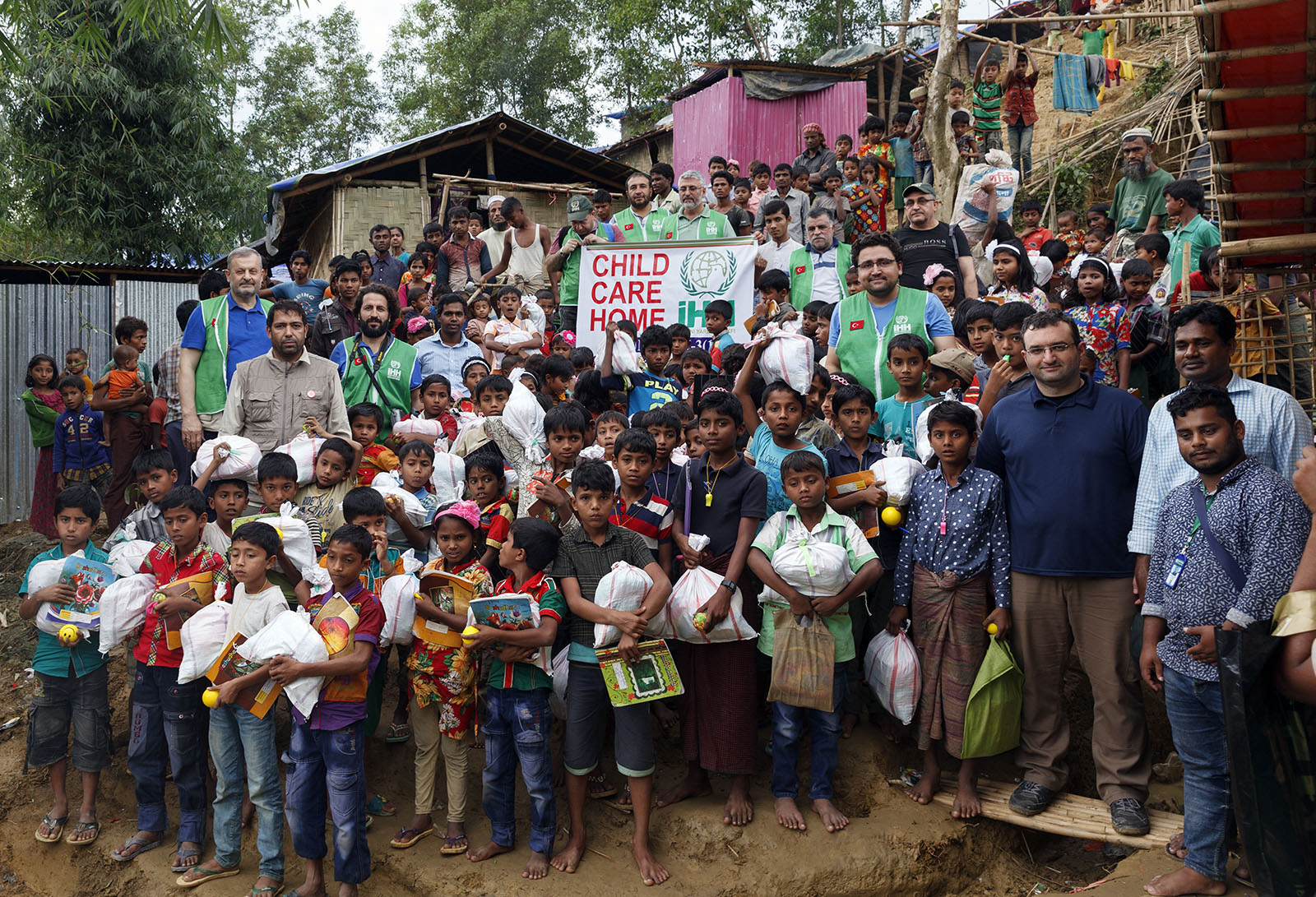 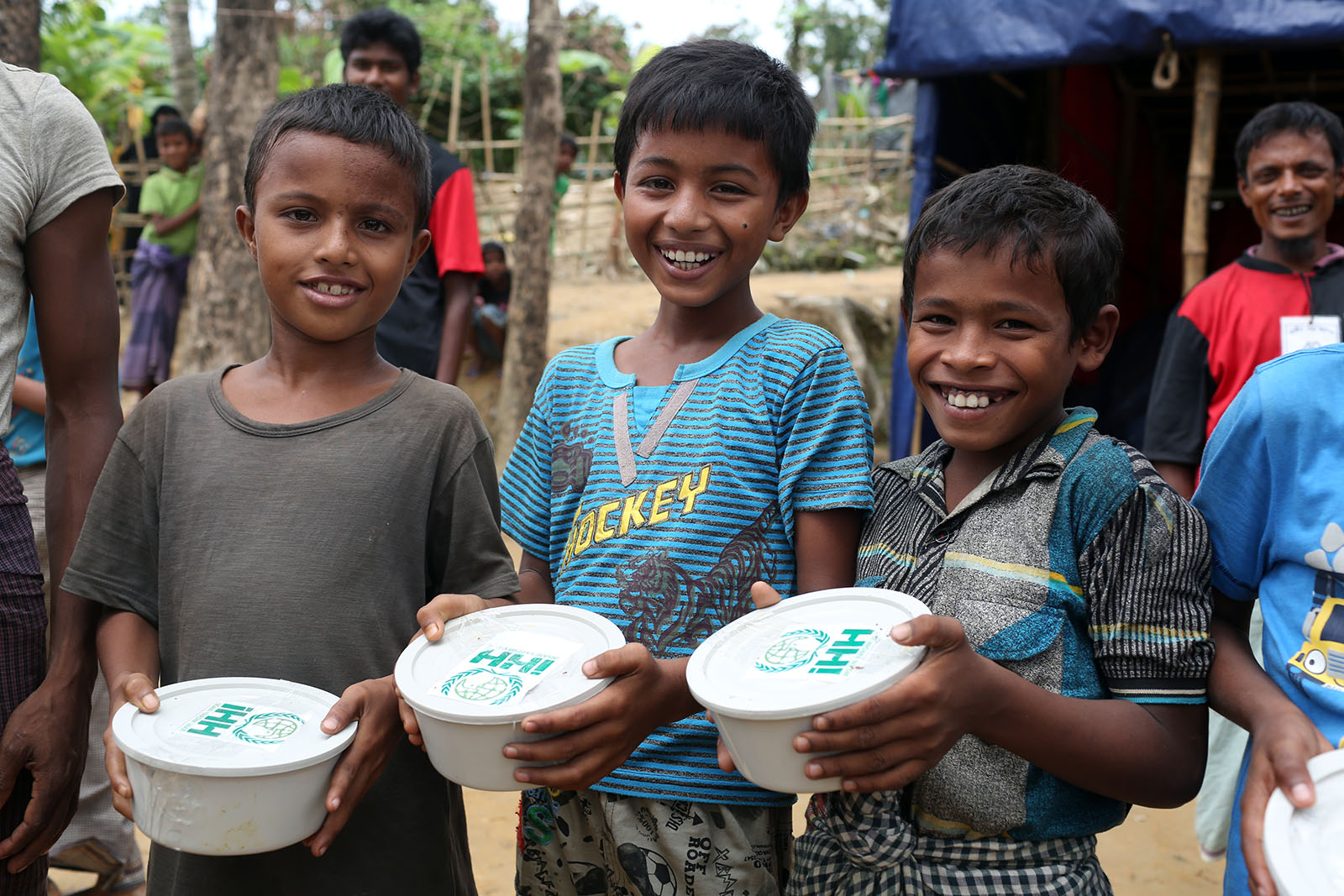 Orphans were not forgotten

With IHH’s Orphan Sponsorship System, Arakan orphans living in the camps were not forgotten. As a part of this system, 678 orphans were included in the monthly support scheme. Stationary materials and toys were also distributed to the other children. 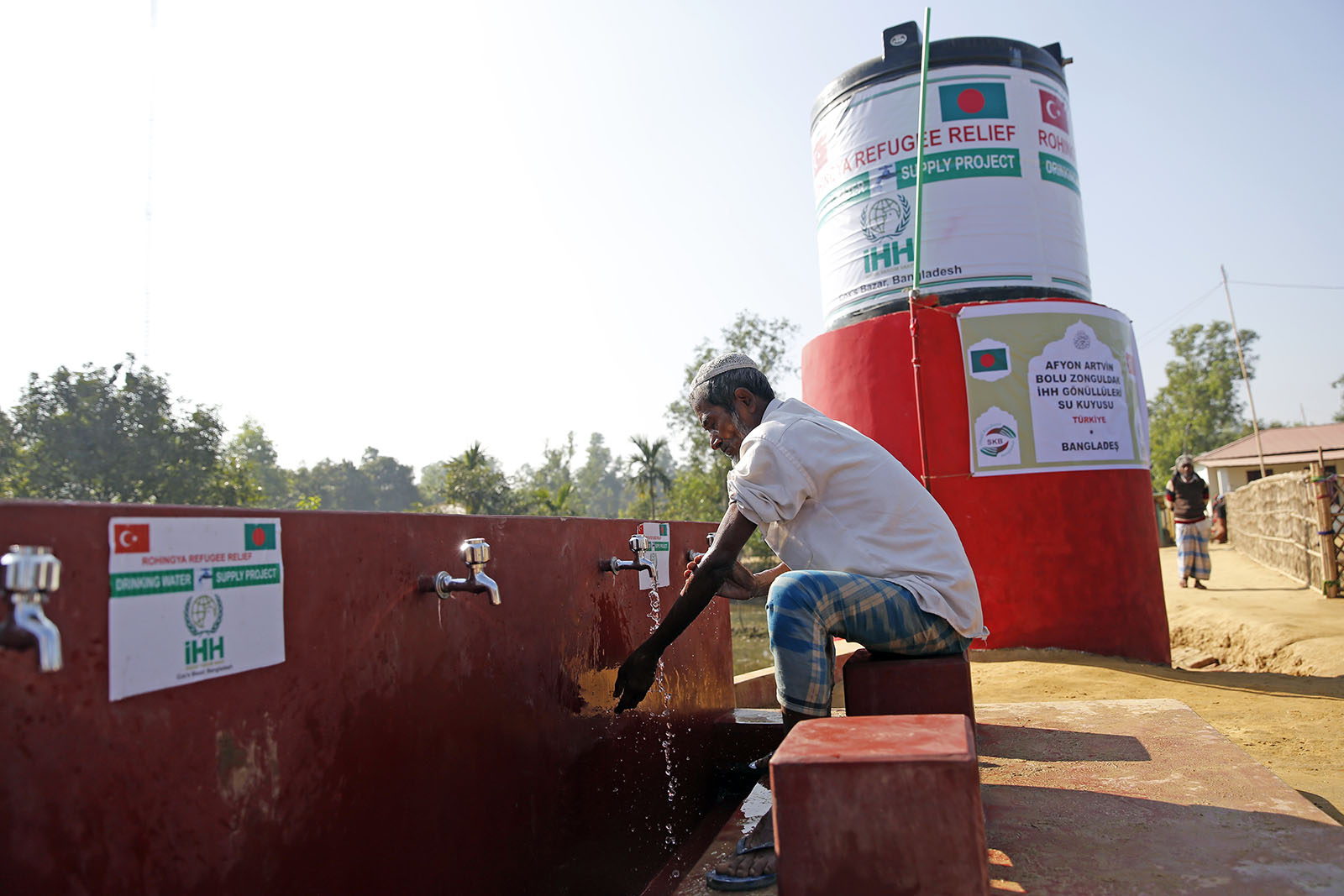 IHH opened 113 water wells and built 10 separate deep water wells that have 5 thousand litre water tanks for the Arakan people who have great difficulty in accessing clean water in the camps. In addition to the water wells, the building of 305 bathing and toilet facilities is also included in the construction of permanent works. 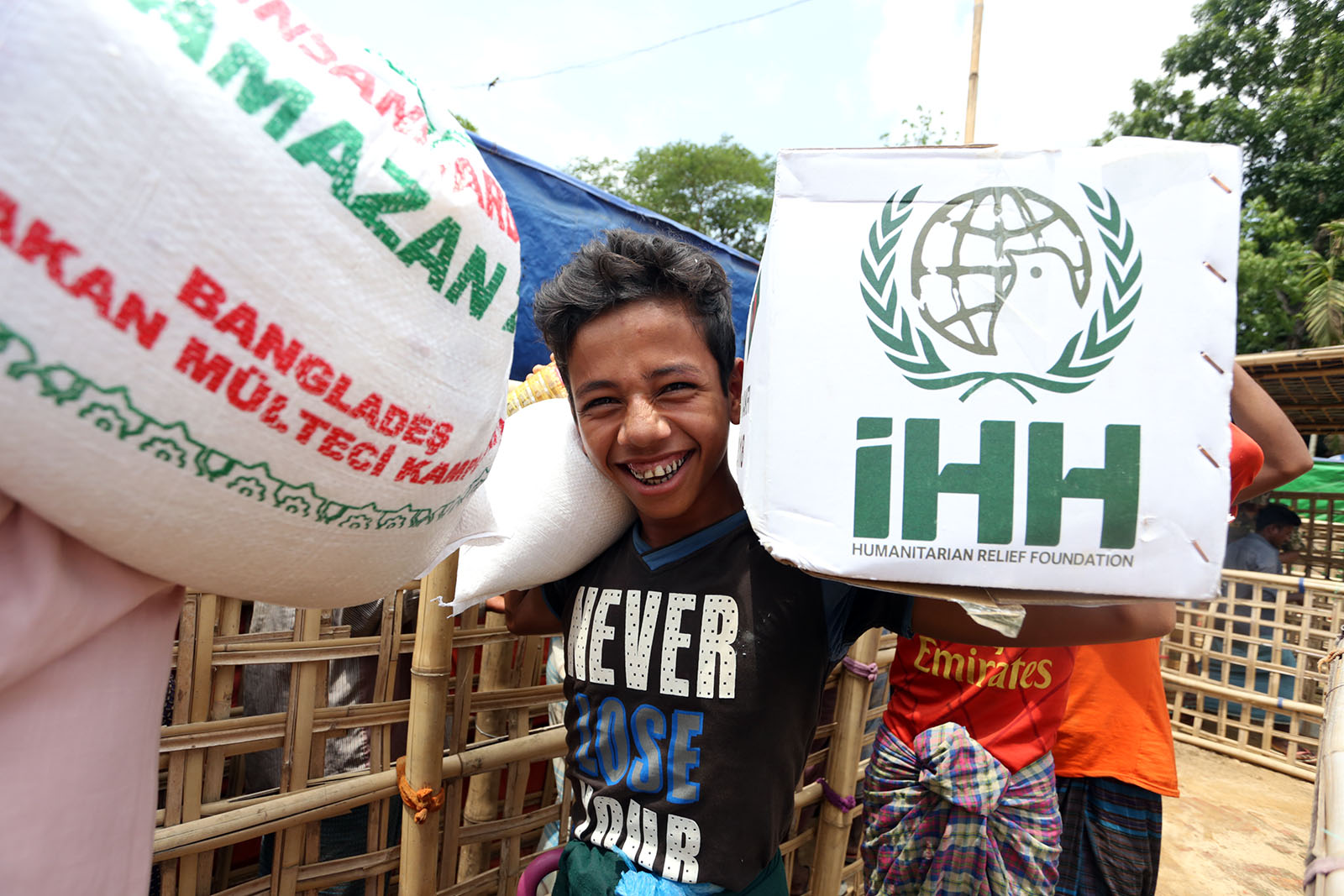 Other items of aid 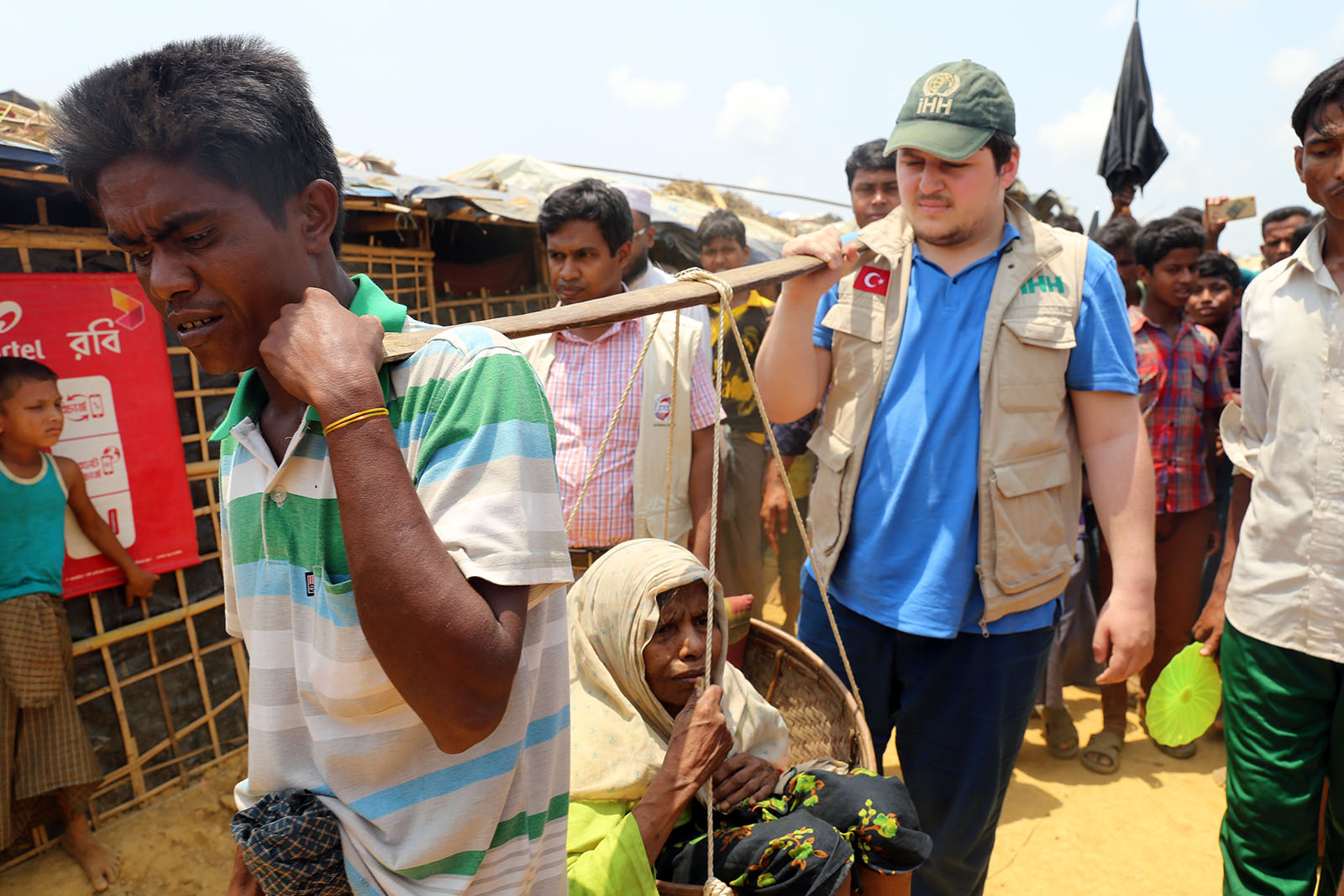 IHH met all the needs of Muhammad Ayyub

Among those who received aid from IHH was Muhammad Ayyub who carried his mother and father for seven days in baskets on his shoulders. IHH, that found Muhammad Ayyub, a young man who carried his mother and father in baskets on his shoulders when fleeing from the persecution in Arakan in April in the camp where he lived, provided treatment for him and his family and began to meet his needs.

IHH responded to Muhammad Ayyub’s appeal to President Recep Tayyip Erdogan for help in the treatment process of his mother Asia Hatun, and transported his mother by ambulance to the Sahara Hospital established in the region by the Turkish Ministry for Health. In the hospital also supported by AFAD, Ayyub, his mother Asia Hatun and his wife were treated. IHH donated a wheelchair to Asia Hatun who has been paralyzed since 2008. IHH also met all the needs of Muhammad Ayyub and his family by providing them with the necessary humanitarian aid. 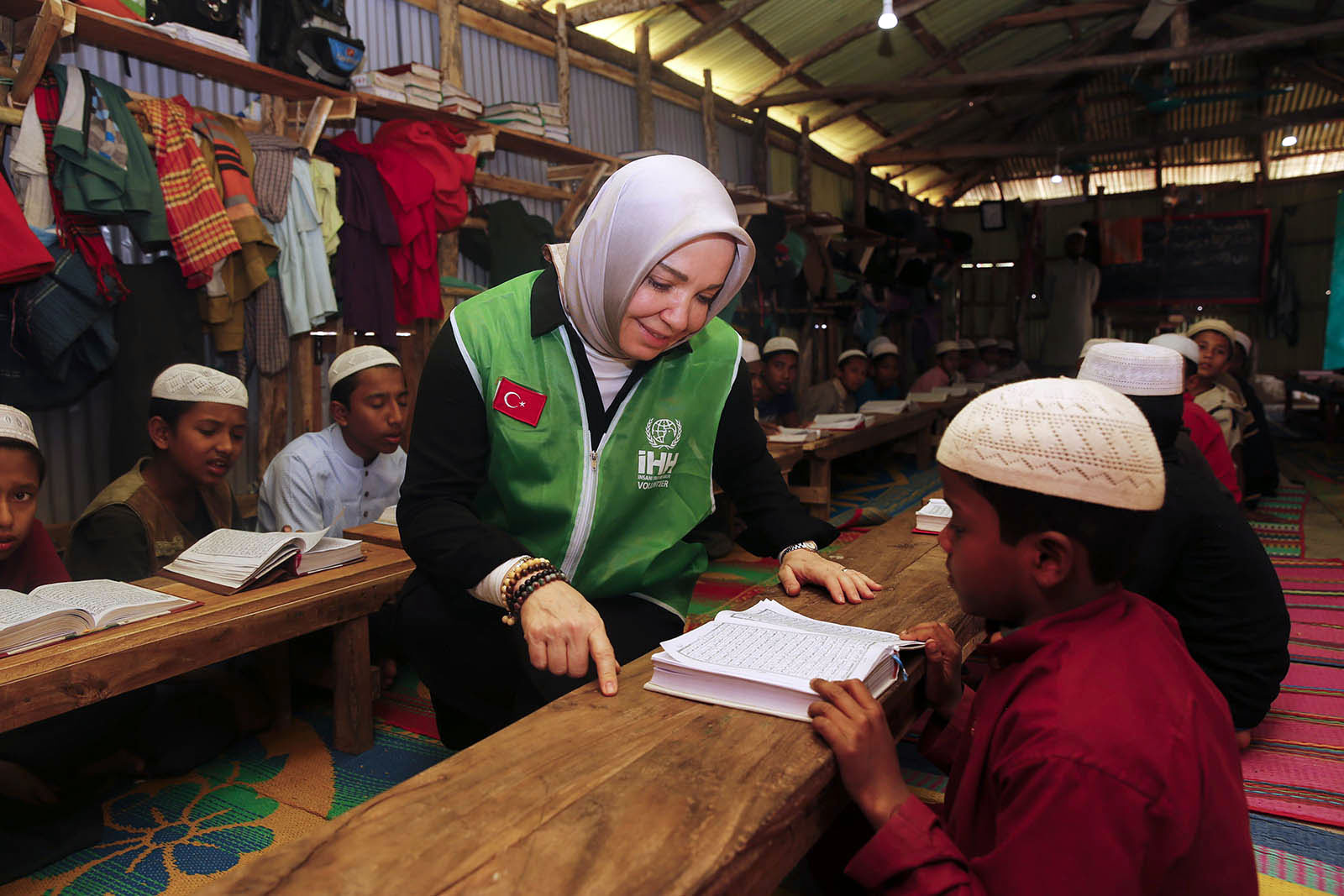 Visit to the Arakan people by senior officials

In January, AK Party MPs and Members of the IHH Board of Trustees visited IHH’s camps in Bangladesh. Immediately after this, Former Minister of Culture and Tourism Numan Kurtulmuş visited the Coordination Center opened by IHH and was briefed on IHH’s activities in the region. Actor Sinan Albayrak was also among those who travelled to visit IHH’s camps in the region. 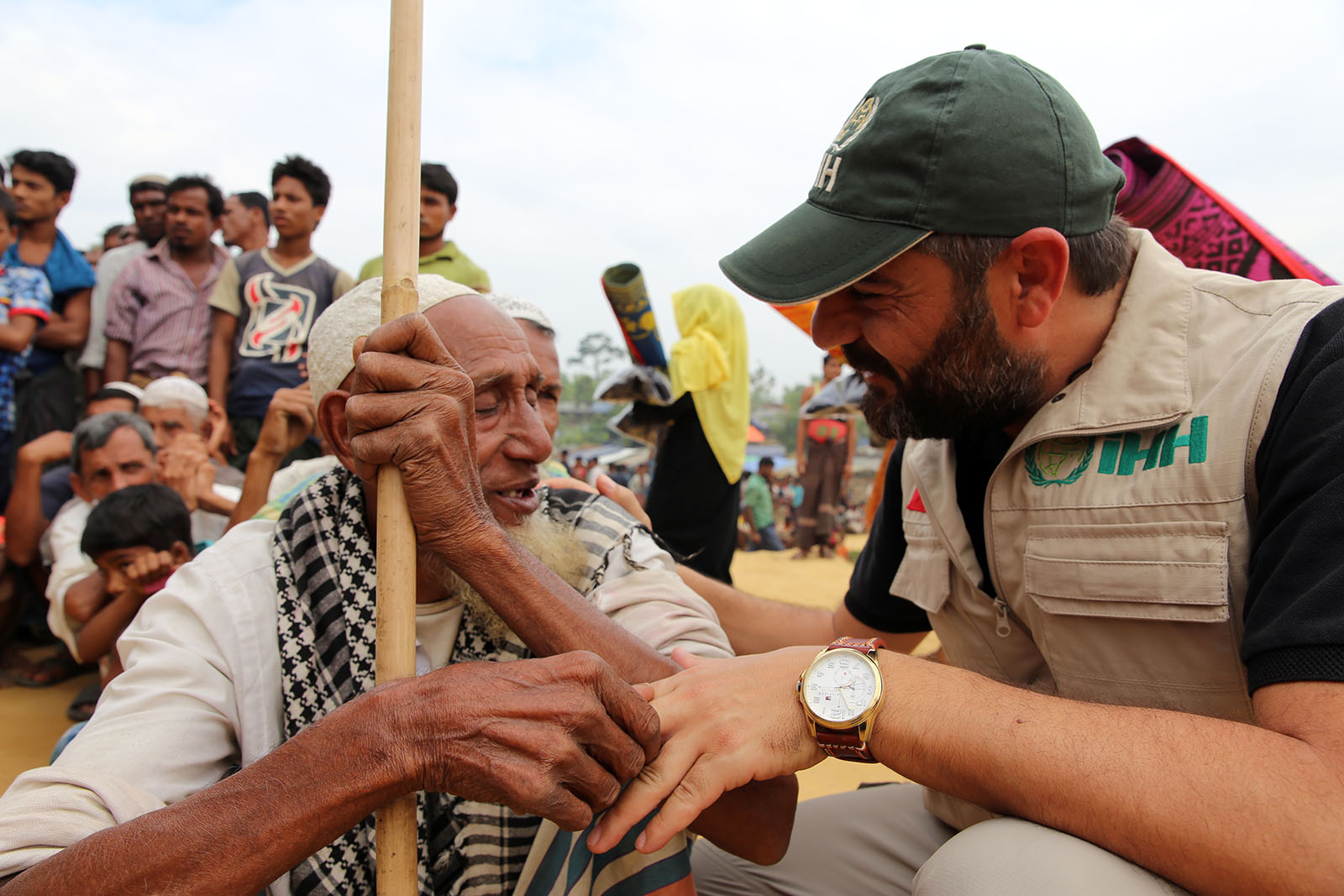 Donators who want to give aid to the Arakanese via IHH can donate 5TL by texting ARAKAN via SMS to 3072. Donations can also be made on IHH’s website or bank account numbers stating the code ARAKAN. 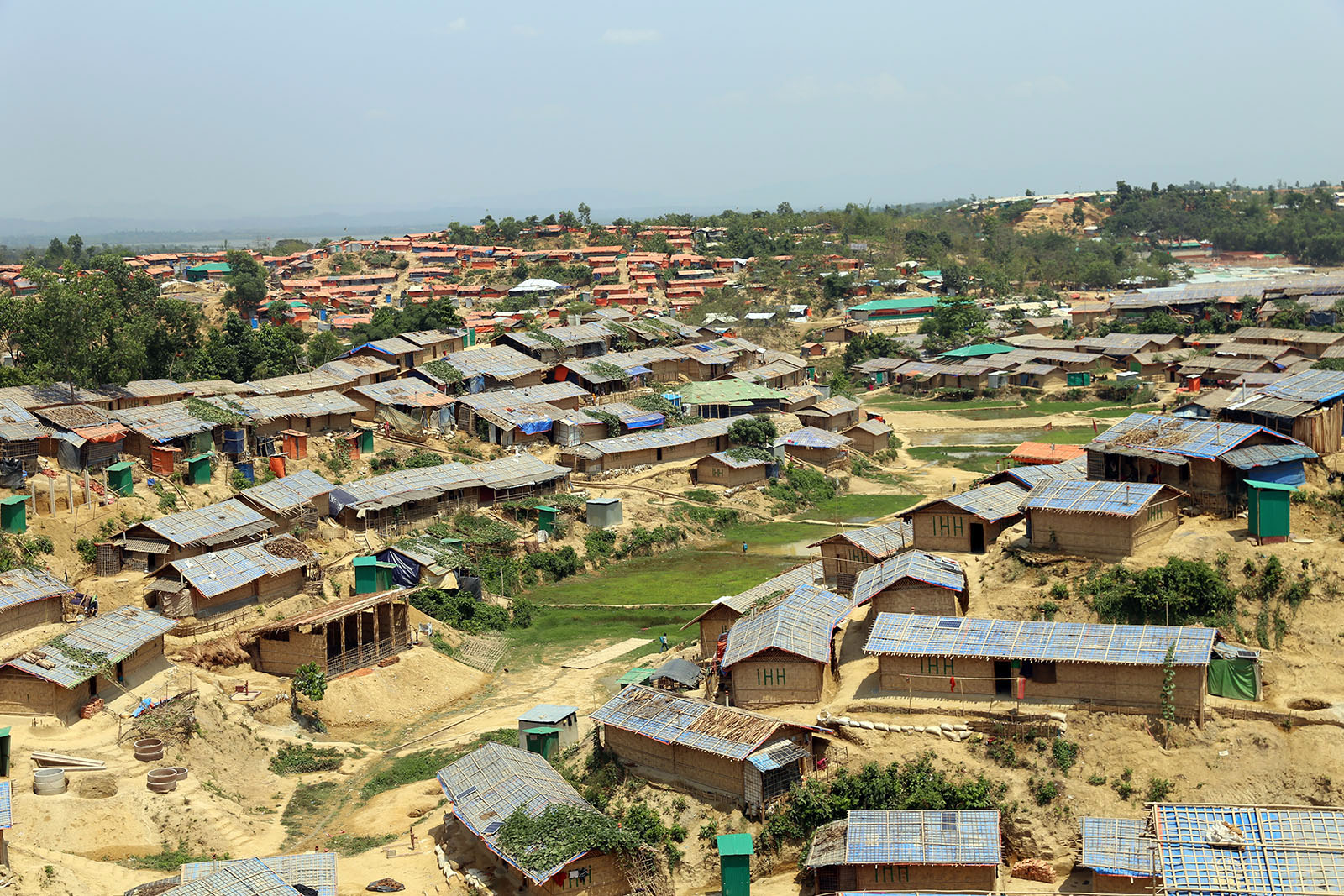