Cataract surgeries continue in Sudan
A total of 375 cataract patients in Sudan’s rural areas have been offered surgeries.
Africa, Sudan 07.02.2013 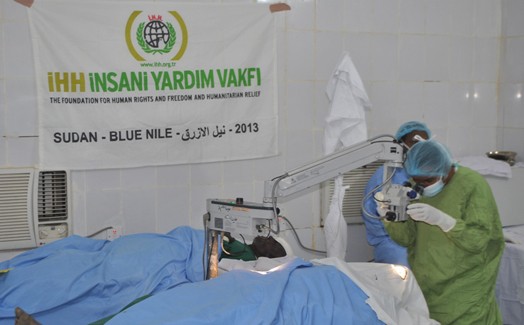 Cataract surgeries sponsored by IHH Humanitarian Relief Foundation in Africa continue in rural parts of Sudan. In this regard, 375 cataract patients were offered free surgeries in Damazin in Blue Nile province on the Ethiopian border.

Delivering the opening speech, Aynacı gave some information about the work which has been done in Sudan since 2007 as part of the cataract campaign. Wife of Sudanese President Al-Bashir, who also spoke at the event, offered her thanks to the friends of Sudan and said they are grateful to brother Muslim nations due to their support for the development of Sudan.

During the 10-day-long surgeries, 1,500 patients from Damazin and neighboring regions were examined. Free surgeries were offered to 375 of these people who had cataracts. The cataract patients were re-examined three days after the surgeries and they regained their vision.

Damazin, one of the poorest provinces of Sudan, which is one of the least developed countries in the world, has a population of around 80,000.There are only two eye care doctors in the province where economic circumstances are very poor and majority of the people live on the hunger threshold. In Damazin where purchasing power is too low, it is nearly impossible for the people, except for a small group, to afford medical services.