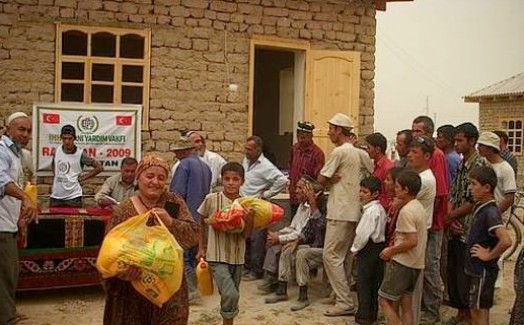 IHH teams distributed food to 370 families whose majority is orphan families in the capital city Dushanbe. In the city of Feyzabad, stationary materials were given to 100 students who are mostly orphans. 80 poor families were given food packets. Also 63 orphans were presented clothes for eid.

In the flood disaster in Khorassan, 300 houses were damaged in the previous months. IHH teams did not forget these families either and distributed food packets to the 130 flood victim families.

Tajikistan whose capital city is Dushanbe declared independence on September 1991 from Soviet Union. 90 per cent of the Tajik population of 7 million 500 thousand is Muslim.

Tajikistan, after the civil wars between 1992-1997 that hundreds thousands of people died, is trying to strap its wounds. From the industrial aspect there is not an important development in the country. Poverty is at the highest level. Tajiks see Turkey that is thousands of kilometers away as the most important “brother country” in the world.

Muslims in Tajikistan cannot live their religion properly. Some obstacles in front of the religous education cause troubles about this issue.