Flour and other aid items delivered to Syrian refugees
IHH Humanitarian Relief Foundation has delivered food and other types of relief items to Syrians in Güveççi village and Syria’s inner parts.
MiddleEast, Syria 26.09.2012 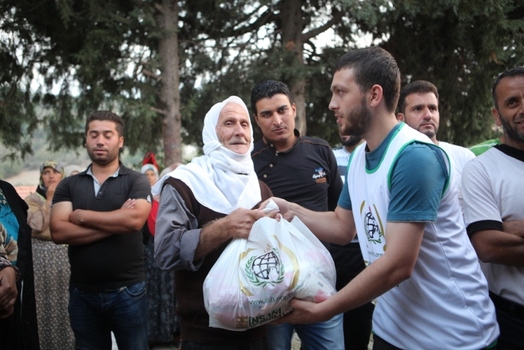 IHH, which has been extending a helping hand to the oppressed Syrians since the beginning of the public unrest in the country, has over the past months increased its relief efforts for Syrian refugees and Syrian people who are under bombardment.

A total of 1500 kilograms of flour sent from the IHH’s crisis center in Hatay was distributed to the Syrian refugees in Güveççi village in the southern province of Hatay. Five-hundred refugees in Güveççi are staying in the homes of the villagers there.

IHH teams did not forget the Syrians who are treated in Antakya and Kilis and distributed “hospital bags” to them.

The 6 tons of flour sent by IHH was delivered to Syrian people living in Jabali Turkman, Jabali Suhyun and Jabali Akrad.