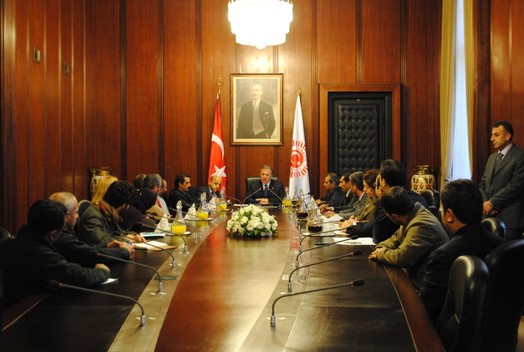 Other attendants were Bülent Yıldırım, president of the IHH Humanitarian Relief Foundation, members of the IHH executive board, AKP lawmaker Zeyid Aslan and Kevin Ovenden, head of the British group in the convoy.

TBMM Speaker Şahin said he was pleased to see participation of concerned people from the United States, Asia and Europe at the convoy organized to deliver aid to Palestine, which has been under embargo for months, and added such concerned actions raised his hopes about the future. He stressed the urgency of delivering aid materials to Gaza and congratulated the organization committee for its humane sensitivity.

IHH President Yıldırım recalled that 1,500 died in the Israeli attacks on Gaza and said: “Israeli attacks ceased temporarily, but the people of Gaza were not given a chance to recover. The month-long embargo is still in progress. Our aim is, with the help from the international community, to break the embargo and take aid to the Palestinian people. Allah willing we will reach Gaza and deliver aid entrusted to us.” He also thanked Şahin for his sensitivity.

Ovenden pointed to Turkey’s stance and stated it should be an example to other countries. At the end of the meeting, Şahin presented Turkish flags to the committee and bade farewell.

The organization was received by SP leader Kurtulmuş. He indicated the significance of the action and said: “I congratulate these people who have travelled thousands of kilometers,” and added “Israel is continuously keeping the Holocaust on the international agenda. Well, what about Israeli actions in Gaza?”

AKP Deputy Chairman Abdulkadir Aksu met the committee and praised their sensitivity. The committee also met Lawmakers Aslan, Üskül and Mercan as well as Palestinian Ambassador Marouf to inform them about the convoy.