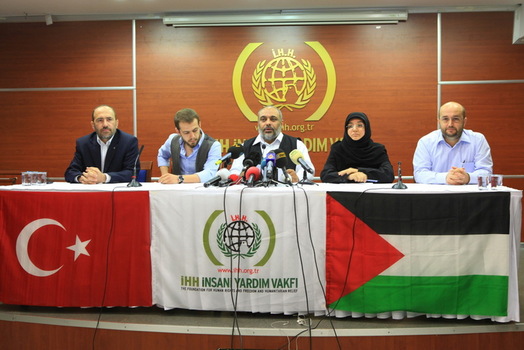 IHH Humanitarian Relief Foundation President Lawyer Bülent Yıldırım organised a press conference in the centre of the foundation in Fatih, Istanbul and discussed 'Freedom Flotilla II', 'May 31 Commemoration Programmes', related works and latest developments. Mr. Yıldırım said that Israel, who attacked the Mavi Marmara, behaves like a delinquent and added that “Israel martyred our 9 brothers, and 56 of our brothers and sisters were wounded. One of our friends is still in an intensive care unit. They arrested activists, and tortured them there. Israeli soldiers stole credit cards, computers, the personal belongings of people, they stole money from their pockets. What did the world do in return? People and leaders who have conscience stood by us. What was the legal sanction of this? Israel committed a war crime.”

Bülent Yıldırım also said that a large proportion of people in the United States are fed up with Israel's attitude and Israel is becoming more alone. Mr. Yıldırım, who underlined that freedom will not come to any country who uses guns, said that “we will set off without any guns; even we will not take any pocket knives. And with support and contribution from all around the world and together with 22 non-governmental organisations, we will contribute to a freer world. Please do not overestimate this flotilla. This flotilla is only a small part of this process. We have bigger projects. We suggeset Israel be smarter. If you have a little bit of consideration, you allow this flotilla to its destination. Do not touch this flotilla; let it go to Gaza. If you interfere again, we will make news out of it by remaining on the open sea for days. Streets would be full of demonstrations against Israel. If you touch these ships, lovers of freedom will fill the streets again and opposition against Israel will increase. Our greatest strength is to be civil, to be unarmed, going there without even a single knife, and having the world behind us.”

The ships will depart in late June

Bülent Yıldırım, who said that 15 ships will depart on the last week of June, added that “we are not increasing the number of ships, because there will be other flotillas. The big project I was talking about earlier is a big surprise apart from this. Do not blow this second flotilla out of proportion; it is a small piece of the process. If Israel and sovereign powers act with commonsense, they will allow these activists to pass. There will be participants from more than 100 countries on these 15 ships. Twenty-two NGOs are organising this work. There are lots of Jews who have applied to us so far. No matter which country they reside in, they are uncomfortable with the situation. A total of 1,500 activists are being considered for participation in the flotilla.”

Mr. Yıldırım was asked the question “is there any international opposition to the flotilla setting off?”. His reply:“U.S. officials have warned against it saying 'We advised the Turkish government', but we are a non-governmental organisation and we make our own decisions. Of course, Israel is pressing all countries using its influence. In addition, some supporters of Israel inflict violence against some of our activists. We give our own decision. It was a test for Turkey. The Turkish government did not act like some other world leaders. Turkey expressed that to interfere non-governmental organisations would restrict the field of freedom of expression. In that sense, Turkey is more advanced than the USA, who defines itself as a country of freedoms.”

Click here to fill out the preliminary application forms for the Freedom Flotilla II.