IHH delivers hot meals to 7,000 quake victims in Simav
IHH Humanitarian Relief Foundation has been delivering hot meals to 7,000 people through a mobile kitchen in Kütahya’s Simav district which was recently hit by an earthquake.
02.06.2011 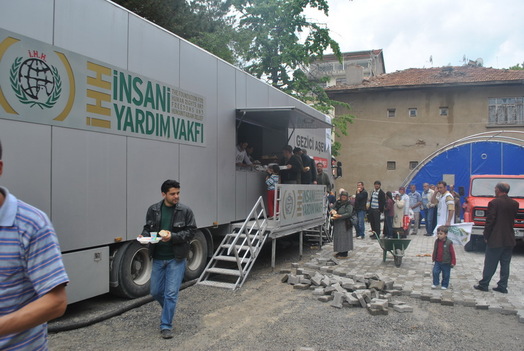 On May 19, Simav was rocked by a magnitude 5.7 earthquake which damaged houses in the center of the district as well as those in the villages. Simav residents who had to leave their damaged houses have been living in tent cities established for the quake victims.

The IHH sent a mobile kitchen to the region in the aftermath of the quake. IHH aid workers have begun to deliver hot meals at a region where there are 40 tents. Carrying out relief efforts in the region, the IHH team is providing food aid to 7,000 people living in tents and in the villages of Simav. The IHH team is also sending food sufficient for 1,000 people to Naşa and Gökçeler villages.

IHH teams in the region say the material damage in Simav is too much and 70 percent of the houses have been recorded as unsafe for living.

Normally, the IHH was planning to end food delivery in the region on Thursday but it decided to continue for another one week due to a request from Kütahya Governor’s Office.