140 trucks of aid for Syrian War victims
IHH Inegöl, Şanlıurfa, Konya, Bursa, Elazığ, Van, Yozgat and Kütahya Branches sent a total of 140 trucks of aid to families that are facing extreme hardships due to the severe cold, snow and rainfall in north Syria.
02.02.2022 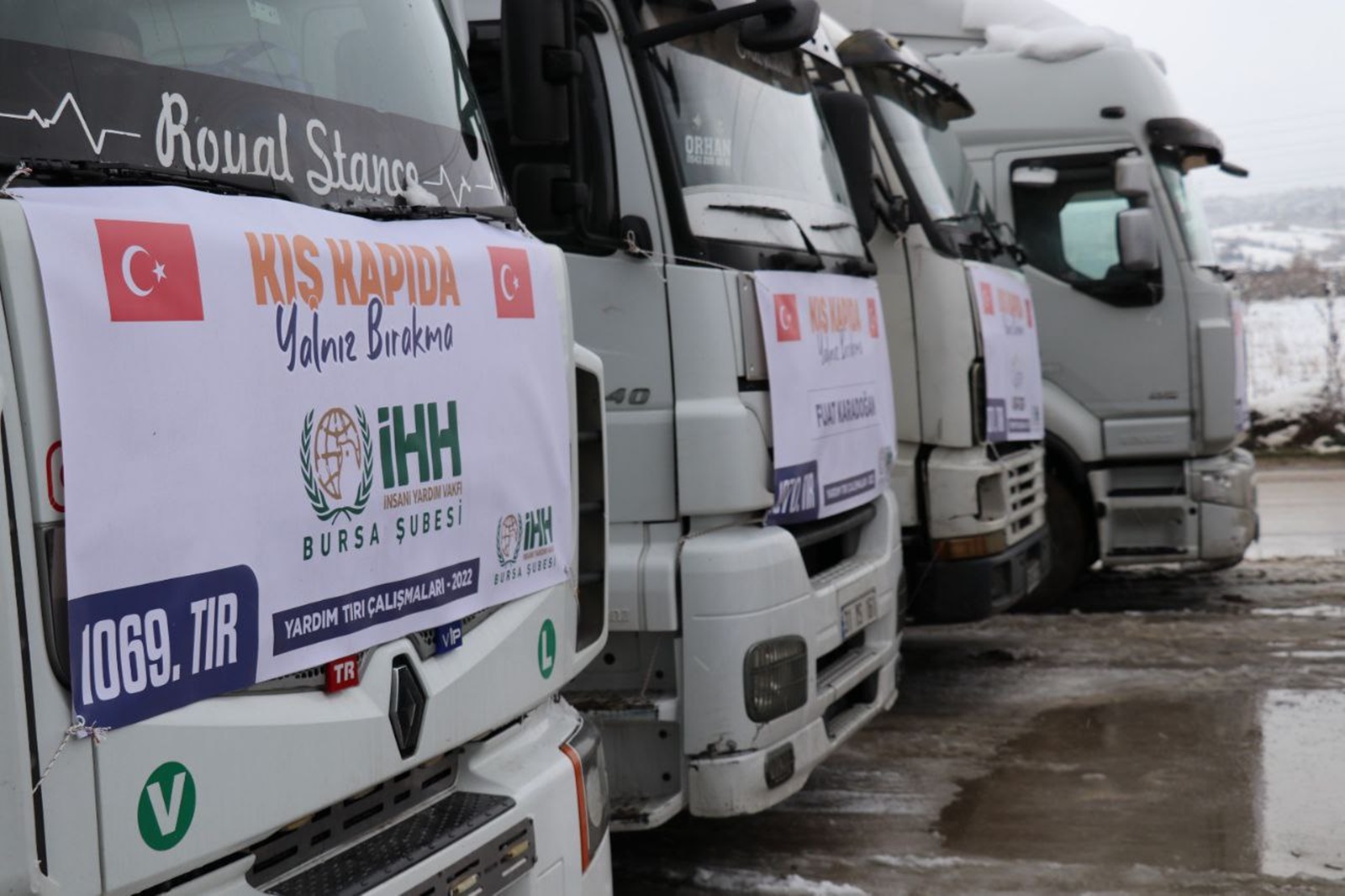 This shipment of aid is part of the “Winter is Coming, Don’t Leave Them Alone” campaign launched by IHH Humanitarian Relief Foundation. While donors all over Turkey contributed to this campaign, Inegöl IHH, Şanlıurfa IHH, Bursa IHH, Konya IHH, Kütahya IHH, Van IHH, Elazığ IHH and Yozgat IHH also sent aid to the people in need in the region.

50 trucks of aid from Inegöl

Inegöl IHH managed to collect as much as 50 trucks of aid within 5 days. The aid trucks were sent off to the region with prayers. In a statement, Chairman of Inegöl IHH Ilhan Tatlı said, “Millions of people that were forced to migrate due to the war have been living in tents under extremely difficult conditions for many years…the freezing cold and severe conditions make it even more difficult. Due to their financial situation, there are hundreds of thousands of families that cannot buy boots, coats, blankets, stoves and coal.”

The aid reached the region

Explaining that they launched a campaign for blankets and coal for the region, Tatlı continued, “As in the past, the people of Inegöl supported us. In support of the oppressed, in just 5 days the people donated 50 trucks full of aid and kindness. I thank our donors on behalf of these aggrieved people. May Allah be pleased with them all.”

47 trucks were sent from Elazığ

With its “Winter Brings Cold, Brotherhood Brings Warmth” campaign, the Elazığ IHH Humanitarian Aid Association sent 37 trucks of coal and 10 trucks of flour to be distributed to families in need in the region.

13 trucks containing clothing, boots, blankets, flour, coal, stoves and basic needs collected with the help of volunteers in Şanlıurfa was sent off to Syria with a ceremony organized at the Karaköprü Exhibition Center.

In his speech, Chairman of Şanlıurfa IHH pointed out that millions of people who were forced to migrate due to the war in Syria have been living under extremely difficult conditions and dependent on aid for many years.

The trucks were sent off with prayers

Konya IHH supported our aid campaign with 11 trucks of aid

As part of the “Winter is Coming, Don’t Leave Them Alone” campaign, Konya IHH Humanitarian Aid Association sent 11 trucks containing food supplies and clothing. Thanking the donors for their support in the campaign, Chairman of Konya IHH Hasan Hüseyin Uysal said, “With the trucks sent today, we have sent 100 trucks in total. With the help of Allah, I hope these trucks reach their destination and to an extent, relieve the hardships of our brothers and sisters in need. In the scope of this campaign, we aim to send at least 150 trucks. This is our target. Hopefully, by the end of the year this will reach 300 trucks.”

10 trucks of aid from Bursa

IHH Bursa Branch sent a total of 10 trucks, 6 containing coals, 2 containing blankets and 2 trucks filled with food supplies to the refugee camps on the Syrian border.

9 trucks of aid from Kütahya, Van and Yozgat