Holding a news conference in the capital city of Islamabad, IHH’s Pakistan representative Mehmet Kara said the humanitarian aid sent to Pakistan after they were collected from 81 provinces of Turkey began to be distributed in the country in cooperation with the local Khubaib Foundation.

Speaking at the new conference which was attended by Turkish ambassador to Pakistan Babür Hızlan and some senators from the Pakistani Parliament, Kara said he was very happy about the Defne Y cargo ship’s extending a helping hand to Pakistan after it was stopped and attacked by Israel on its way to Gaza last year.

Noting that the cargo ship brought food, medicine, tents, blankets, stationery materials, water purification system, textile and construction materials, Kara said these materials will be distributed in the areas which were severely affected by the flood disaster such as Sindh, Punjab and Khyber Pakhtun.

Delivering a speech at the news conference, Hızlan said: “The Turkish nation has always extended their support to their Pakistani brothers and sisters and they will continue to do so. Pakistan and Turkey are two Muslim brother countries. The humanitarian aid sent by Turkey by this ship will be distributed to the flood-stricken Pakistani public.” 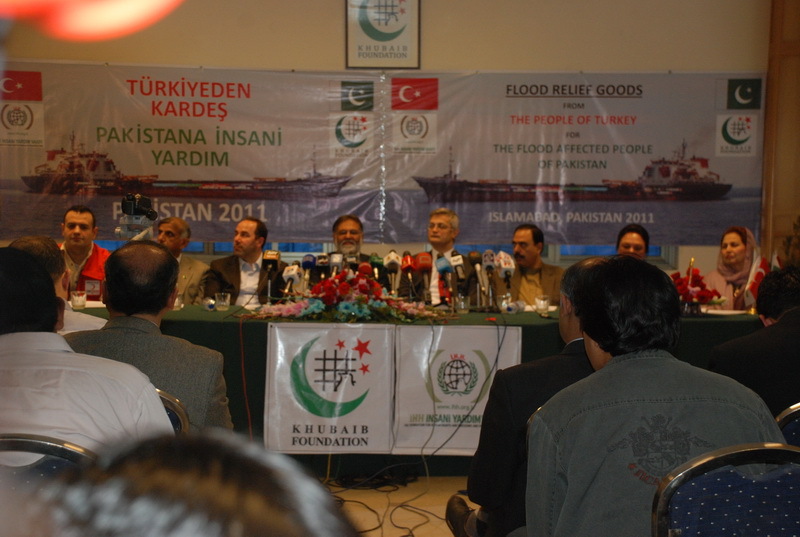 The IHH, which is among the first Turkish aid foundations that arrived in Pakistan in the aftermath of floods in July and August of 2010, is making efforts for the country’s soonest recovery from the flood disaster. With its 200-member team, the foundation is distributing hot meals, providing medical services, constructing prefabricated houses, repairing public buildings and mosques. The foundation has so far constructed 350 houses for the flood victims and it plans to rise this number to 1.000 by the end of the year and deliver the keys of the houses to the flood victims.