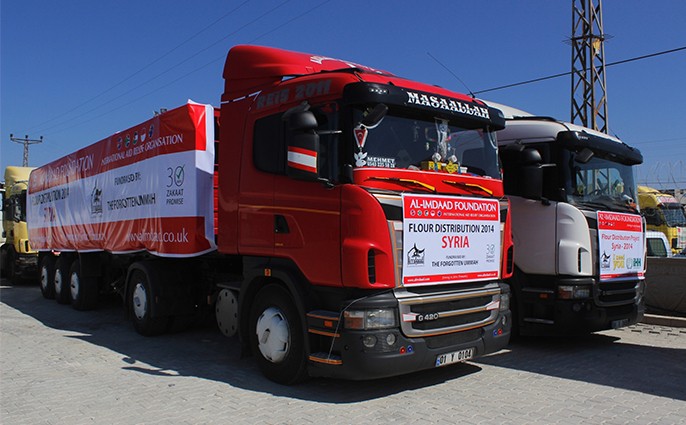 Under the "I need you" campaign, 1,000 tons of flour was prepared with the support of donors from the United Kingdom and South Africa. It was then sent to Syria after a farewell ceremony, organized in IHH's Reyhanli logistics and coordinating center.

Muhammet Yorgancioglu, Syrian project coordinator, stated that they have been continuing to help the Syrian's since the very beginning of the crisis. "I would like to thank Al Imdat Foundation for not leaving us alone and providing constant support to the Syrian people."

Yorgancioglu, provided details about the current conditions in Syria and stated that "Millions of people were forced to leave their homes to seek refuge in more safer areas in Syria or border countries. These people are running away in order to save their lives. It is everyone's duty to deliver aid to them."

WHAT IS GOING TO BE DISTRIBUTED?

650 tons of flour will enter through Cilvegozu border gate located in Hatay. The remaining 350 tons will cross through the Kilis Oncupinar border to Syria. Then the IHH team will distribute them to the needy families of Idlib, Latakia, Homs and Hama.

Till now, IHH Humanitarian Relief Foundation has sent 3, 500 trucks to Syria. They have also built 20 refugee camps over there. IHH is continuing their Syrian projects at their Reyhanli and Kilis offices.