IHH sends aid cargo to Pakistan
The IHH has flown a cargo aircraft laden with relief supplies to Pakistan to be delivered to flood victims.
Pakistan, Turkey 30.08.2010 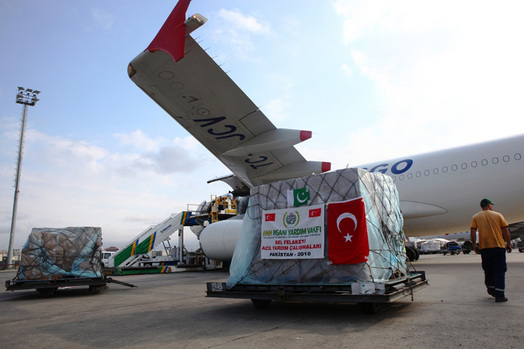 The THY freight aircraft took off from Istanbul airport at 10:00 local time with a cargo of 35 tons of relief supplies. The 600,000 Turkish liras worth cargo contains supplies of powdered milk, canned food, cookies and medication. The supplies will be delivered to the affected families by our aid teams in Pakistan. A large portion of the cargo consists of powdered milk since children are the worst affected by the floods.

Executives of the IHH Humanitarian Relief Foundation organized a press conference before the take-off.

IHH Deputy Head Murat Yılmaz noted the foundation would carry on aid effort until all flood victims have recovered from damage of the devastating flooding.

Cash donations and in-kind aid we receive are extended to flood victims in Pakistan as soon as possible, Yılmaz said and added the IHH forecast an aid package of 30 Turkish liras for the affected Pakistanis. He stressed the significance people of Turkey attach to helping and the urge to donate more in times of natural disasters, wars, occupations and other crises.

“The effort displayed by our people gives us high hopes. We are facing a flood disaster in Pakistan that has reached an extreme extent. A month has passed since the flooding but wounds remain to be healed. The Pakistani government is not able to recover on its own. Great responsibility befalls Turkey. It is time to show solidarity with brother nation Pakistan,” Yılmaz said.

The cargo aircraft was seen off with recital of prayers.

The IHH dispatched aid teams to Pakistan right after the outbreak of floods and sent a cargo train earlier on Saturday.

The next step after cargo aircraft is to ship another 3-ton relief supplies with Gaza ship that is being maintained at the Iskenderun port.

What does IHH do in Pakistan?

The foundation is currently giving out freshly-cooked food to 5000 people every day in regions affected by floods. Basic necessities of 1000 families sheltered at three school buildings in Islamabad are met by the IHH. Health services are provided by a group of 15 physicians, including two doctors, two nurses and a health technician from Turkey. A project was launched to build permanents residences for the flood victims. Clothes produced at a textile workshop set up in Islamabad are distributed to 200 people on a daily basis.