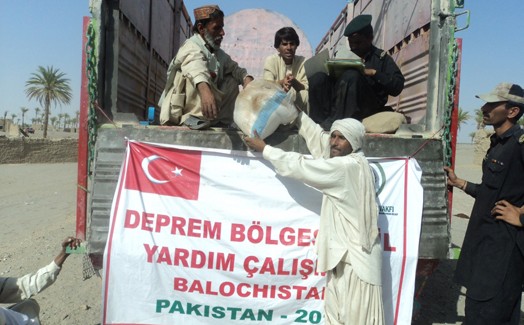 IHH teams, which travelled to the region immediately after a 7.8 magnitude earthquake hit Pakistan-Iranian border on April 16, have taken emergency relief items to the quake victims.

Separate teams which travelled both to Iran and Pakistan on the same day of the quake in order to make examinations and join search and rescue work had examinations in these countries with local officials.
IHH team, which made examinations in Saravan, the closest town to the epicenter of the quake, with Iranian Red Crescent, has also been one of the few civil society organizations conducting relief work in the quake region in Pakistan.

According to IHH examinations, 1,500 houses and 250 workplaces were completely demolished by the quake in Muskil town of Balochistan where IHH teams could reach after a challenging journey. Thirty-four people lost their lives while thousands of others were injured by the quake in the same town.