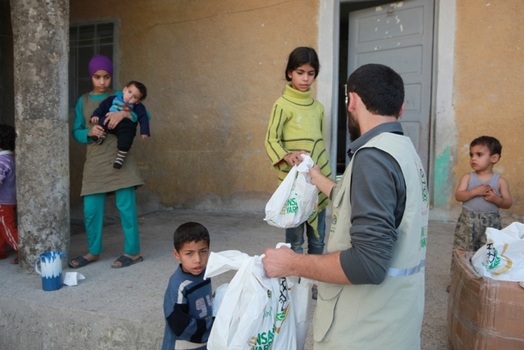 Teams from the IHH Humanitarian Relief Foundation’s crisis desk in Hatay province have taken food packages to Syrian city of Harim which has been under heavy bombardment from helicopters and military planes for days.

IHH teams sent 2,500 boxes of canned bean, eggplant and chicken to the region.

The emergency relief items were distributed to the Syrian people who are under fire.

It is reported that tens of people lost their lives and hundreds of others were injured in the days-long attacks.

IHH has taken emergency relief items to a total of 250 people.

IHH delivered the relief items to 250 people, including women and children, who fled the bombardment in Harim and took shelter in towns near Idlib.

These Syrians also fled the bombardment in Derkush town via the Asi River.

After the locals in Hacıpaşa village informed the IHH teams about the situation of these Syrians, 250 packages including bread and canned food were prepared.

These packages were taken to Syria via the Asi River and given to the oppressed Syrians in the region.

Teams from the IHH’s crisis desk in Hatay also took packages of flour and food to the region recently.