IHH's Response to the Israel's Report
IHH gave a respond about the Turkel report which was prepared by Israel on the Mavi Marmara attack. The head of IHH Humanitarian Relief Foundation Bulent Yildirim, stated that this report was a one-si
Europe, Palestine, MiddleEast, Turkey 24.01.2011 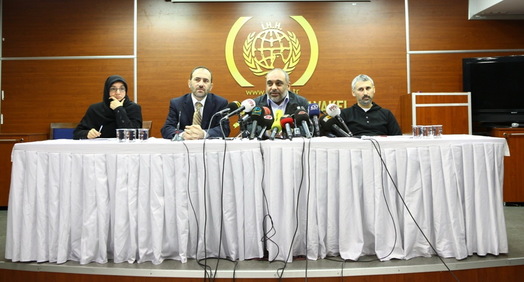 IHH Humanitarian Relief Foundation and Mavi Marmara activists held a common press conference at the IHH's centre in Fatih province of Istanbul.  Bulent Yildirim, The head of IHH and the execute board members Huseyin Oruc, Murat Yilmaz and lawyer Gulden Sonmez attended to the conference on behalf of the IHH.

In the press conference, Bulent Yildirim said that the report declared by Israel was a pre-set report that prepared to exculpate her crimes.

Bulent Yildirim expressed that this was not a shock, Israel done what is expected, as NGOs they did not take this as a serious report by saying that "This is a so-called report that is only to exculpate the Israeli soldiers. Israel punished her soldiers who had stolen on board but she exculpated her soldiers who killed 9 activists."

The Blind Leading the Blind

Yildirim said "This report is like blind leading the blind. Israel deceives her own people too. Israel just tried to please her own soldiers."

Yildirim pointed that the scandalous background of the jury of the committee saying that "We should have support Israel by sending the jurist because when we look at the names in the committee we see that the supposedly neutral observers are the ones who are notorious with their blind support to Israel. They have always taken Israel's side on every subject; try to legalize the Israeli massacre." 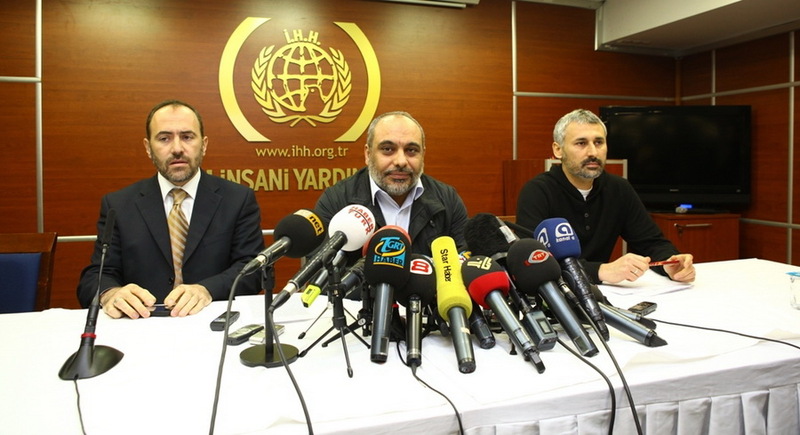 Yildirim also said "Israel only accepted her crimes with this fictitious report. For the first time in Israel's history she felt the obligation to present a report to a committee. This report was presented to the            UN. In a way Israel said 'I don't recognize the international law but I don't have a choice. I did such a huge mistake that I had to present a report to UN' although it is said at the beginning of the report that 'What is done by the IDF is on legal grounds according to the international law."

Yildirim expressed that the report based on lies by saying that "You tried to exculpate your soldiers who stole people's laptops, credit cards, clothes, by Netanyahu's order. You have lost! We do not believe you! You cannot fool us, you cannot fool anybody. This report is meaningless. This is the first time that you had to present a report. You will be judged by the international law."

Yildirim also said that Israel attacked to the Mavi Marmara without any warning about the attack. "Israel          confiscated the voice recording of all the talking, if they are honest about what happened, they must release the records."

No Weapons on Board

Yildirim repeated that there was not any weapon on the ship, opposed to what Israel stated on the report by saying that "There wasn't any weapon on the Mavi Marmara ship, if the IDF soldiers had been shut, it must be done by another soldier. We were there on a humanitarian cause. We could have used the weapons that we took from the IDF's soldiers hands, but we had decided not to use any kind of violence so we threw the weapons away to the sea."

Bulent Yildirim pointed the Turkey's report on the Mavi Marmara attack by saying that it was a very right one.

Yildirim finished his speech by repeating the call for the lift of the Gaza siege "Israel must obey the international law and must lift the illegal siege of Gaza. That would be the only payoff for the 9 innocent lives."

Yildirim also announced that on the next May 31, there would be a new Freedom Flotilla organization and this time they expected 50 ships to join.