Two-Story Containers Are Ready for Syrians
The units in Öncüpınar container city that is realized by IHH Humanitarian Relief Foundation in collaboration with AFAD and Kuwaiti charity organization IICO were delivered to Syrian needy families following the opening ceremony.
Syria 24.04.2017

The civil war in Syria has been going on for six years. The civilians are horribly affected from the events. According to official numbers over 400.000 people lost their lives. The relief aid cannot be delivered to 1.5 million people living in 20 areas around the country. Especially children, women and elderly are trying to survive despite death risk due to hunger.

IHH Humanitarian Relief Foundation that has been reaching out to civilian victims of war since the beginning of the war remains to be the hope of Syrians. In this regard IHH held the opening ceremony of facilities containing 1.248 two-story containers completed in Kilis in collaboration with 12 humanitarian relief organizations that are member of Kuwait High Council of Humanitarian Relief and Presidency Disaster and Emergency Management Centre (AFAD)

The giant project, which cost 10.664.000 USD, contains total 1.248 houses out of which 624 are two-story, school, kindergarten, masjid, and vocational school buildings. The project will serve 1.248 Syrian families with a total of 7.490 family members.

“We Will Keep Up the Work”

In his opening remarks IHH Humanitarian Relief Foundation President Bülent Yıldırım thanked everyone who contributed to the project. ”I would like to extend deep felt thanks to Kuwaiti committee and people who did not shy away from helping our country which hosts the biggest number of refugees in the world. In this giant project the infrastructure was delivered by AFAD while the construction was carries out by IHH and Kuwait. We will keep working to deliver relief aid to the needy all around the world thanks to the ongoing support of you, our precious guests and people.”

“We are Familiar With This Suffering”

Abdullah Matuk, advisor to the Emir of Kuwait said, "This is the second big joint project of Kuwait and IHH and they will keep coming. The projects as such will serve to alleviate the suffering of Syrian people a little. As the people of Kuwait we are familiar with this pain and suffering. Our people have suffered likewise in recent past." “The World`s Seventh Wonder is Coexistence”

Kilis head of municipality Hasan Kara pointed out to the importance of the art of living together with the refugees from Syria.

”Kilis population was 93.000 prior to the war. With our Syrian guests now the current population is 135.000. This shows that the locals make up 40% of the town while Syrians make up 60% of the population. Despite these figures you cannot see a brawl on the streets. Our people show the beauty of living together with our guests to the world. You know they would ask about the seventh wonder of the world. To me the seventh wonder of the world is coexistence. European countries are praised when they admit only a small number of refugees while some other countries only thank us. But Kuwait shouldered the responsibility and helped us carry the burden. I would like to thank everyone who helps not by lip service but in action.”

AFAD President Mehmet Halis Bilden said that Turkey carried out its responsibility of humanity while refugees were kicked in Europe. "Since the crisis broke out in Syria our country has followed open gate policy. I would like to thank to all the ministries which have always stood by our side since day one.” 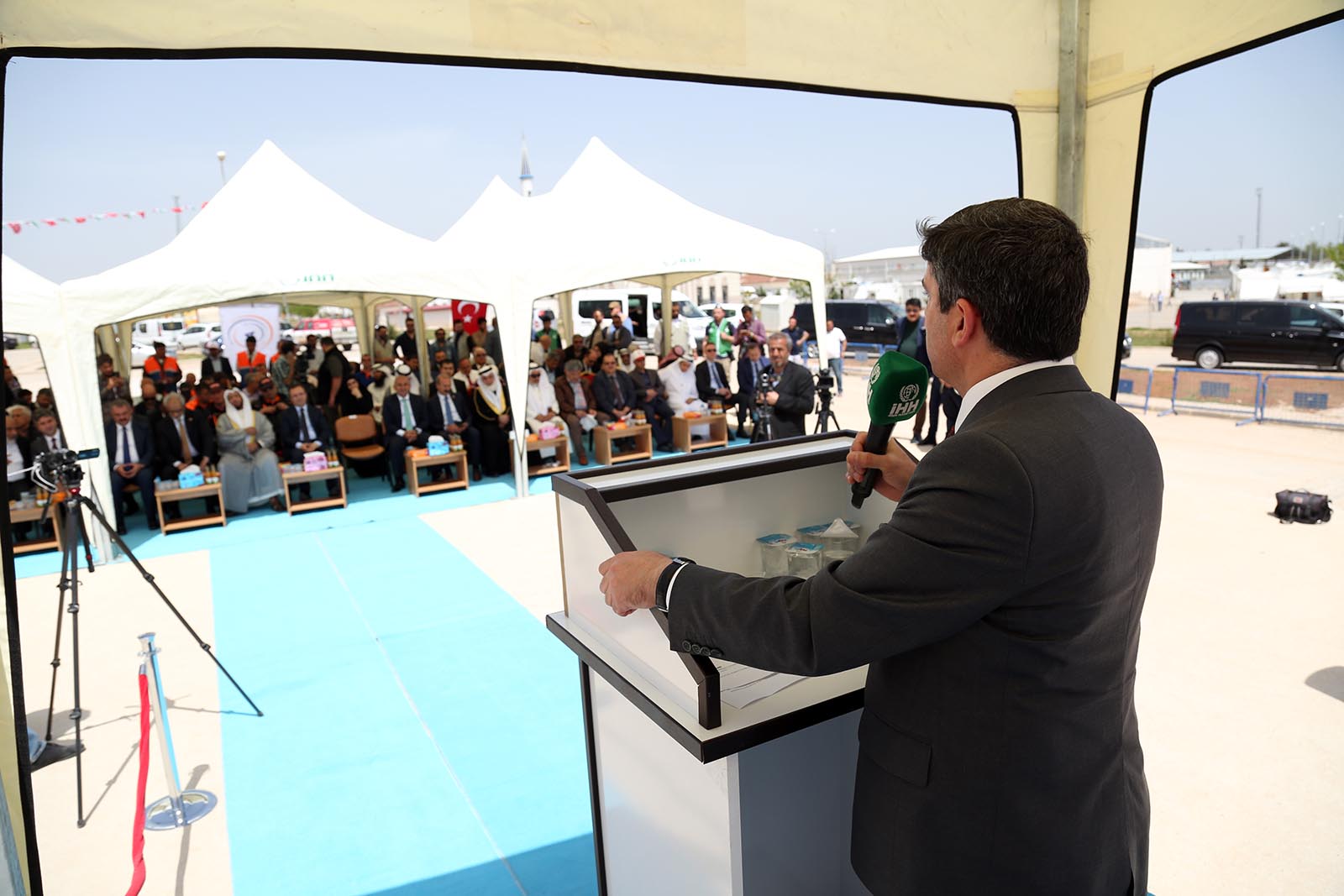 “Developed Countries are in Deep Silence”

In his speech AK Party Human Rights Committee Head and vice president and spokesperson Yasin Aktay said, “I wish these events had not happened. However several world leaders have their hand in it until it came this far. How can a government that bombs its own people and murder its citizens live in this century? Indeed it cannot live. Yet the situation is right before our eyes. The reason is the world`s crowing over. The world was put on test and developed countries failed. They fell into deep silence. "

"This should not go unsaid that especially IHH and our other organizations that contributed to this project deserve our deep felt thanks for delivering aid to not only Syrians but all the needy around the world.”

“The world has turned a blind eye to this tragedy”

Finally Kilis mayor İsmail Çataklı took the floor. In his closing remarks Çataklı noted that suffering and bloodshed dominate our region. "Just next to us hundreds of thousands of people lost their lives while millions were forced to flee. Over 3 million Syrians currently live in our country. It is so sad that world turned a blind eye to this tragedy. Nonetheless our country will keep its aid efforts.  There are exceptions however. Such is Kuwait. Today we are opening an important facility built with the help of Kuwaiti people.”

At the end of the ceremony IHH President Bülent Yıldırım presented an appreciation award to the committee for their aid efforts.