Protests Against Israel Continue After Izzet Sahin’s Arrest
Activists from various NGOs gathered in Taksim in order to protest against Israel’s unfair treatment of Izzet Sahin, a Turkish national and the West Bank representative of IHH. Tonight, two Turkish at
Palestine, MiddleEast, Turkey 11.05.2010 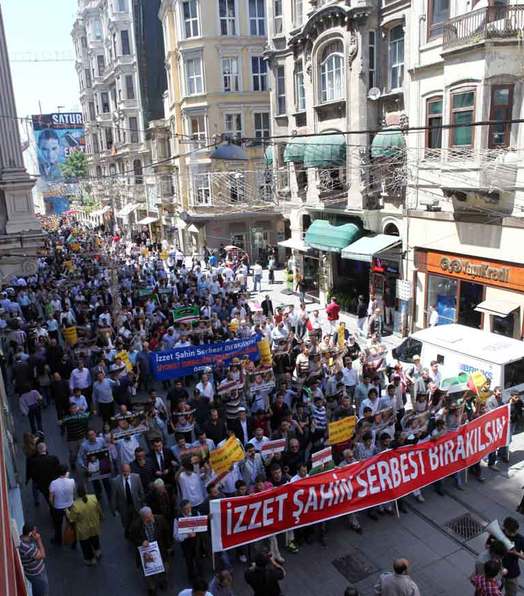 Protesters from various NGOs came together under the name of Friends of Palestine Platform to stand up against Israel for keeping Izzet Sahin, a Turkish national and also the West Bank representative for IHH, under arrest. Sahin’s wife and two kids were also present during the protests.

Thousands have gathered in front of the main door of Galatasaray High School and marched through Istiklal Street up to Taksim Square, today. During the protests various slogans were chanted and banners that read “Izzet Sahin should be set free”, “Retaliation acts will not achieve their aim” were carried against Israel’s actions.

Bulent Yildirim, President of IHH delivered a press statement on behalf of the crowd gathered in Taksim. Yildirim noted that Israel has been holding Izzet Sahin hostage to stop the humanitarian aid flotilla which will sail on the coming days. Yildirim said “This mentality cannot be one of a state, this is the mentality of gangsters. We will be delivering humanitarian aid via ships to the people of Gaza who are under an inhumane embargo. Our actions are completely of humanitarian prospect. According to the Geneva Conventions, Israel does not have the right to stop us. A lot of people including women, children, activists, artists, intellectuals, politicians and journalists will be onboard. Our aim is to put forward the fact that the embargo is nonsense.”

Stating out that IHH (The Foundation For Human Rights And Freedoms And Humanitarian Relief) is a humanitarian aid organization, Yildirim went on to say “We do not have any intentions other than delivering humanitarian relief. Izzet Sahin is one of our staff members and representatives. Israeli military intelligence is misleading their own people by accusing Izzet Sahin of working for objectives other than humanitarian relief. We are hoping that the Israeli court will put an end to this illegal imprisonment.”

Turkish government should interfere in effectively

Ahmet Faruk Unsal, President of Mazlumder said “According to international law, Sahin has been taken into custody within Palestinian territory. What Israel means by this action is that ‘We can arrest Turkish nationals wherever we may please.’ This is a serious insult to Turkish government. In order to establish Sahin’s release, Turkey should effectively interfere in.”

Turkish lawyers are on their way to Israel

Gulden Sonmez, Attorney, Member of IHH’s Administrative Board, together with Cihat Gokdemir, another attorney who is also Head of Mazlumder’s Istanbul Office and Zehra Ozturk are flying to Israel tonight to join Izzet Sahin in his defense and to observe the situation on site.

Sonmez, pointing out the fact that Sahin is being judged by the military court, said “This kind of treatment is in no way deserved by a Turkish national. We are hoping that Sahin will be released by the court on 13th of May, Thursday.

Izzet Sahin was taken into custody by Israeli security agents on the 27th of April 2010 at Bethlehem checkpoint. Sahin has remained in custody for two weeks. Izzet Sahin will appear in court for the third time on Thursday, the 13th of May.