Food packs given to Japan tsunami survivors
The Japanese people are still recovering from the devastating effects of the March earthquake and the ensuing tsunami. The IHH distributed food packs to the families who lost their homes in the earthq
19.08.2011 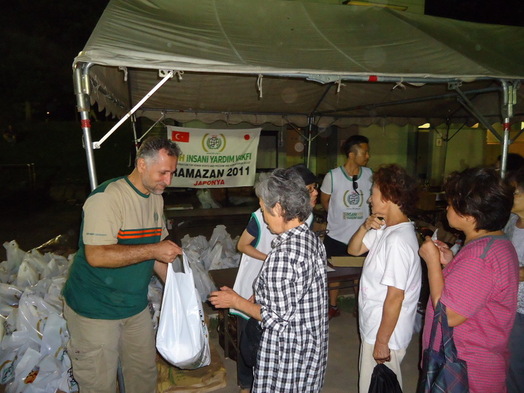 The people of Japan, which had one of the biggest earthquakes of its history on 11 March 2011, are trying to rebuild lives in the towns in the affected regions. The IHH Humanitarian Relief Foundation that took humanitarian assistance to Japan following the earthquake and tsunami sent an aid team to the country as part of its Ramadan organization. The teams gave food packs to 300 families who lost their homes to the earthquake in Kamaishi, Iwate, one of the worst affected towns.

The Japanese people, who sent help after the Marmara earthquake in 1999, are now struggling to recover from a worse quake themselves. The IHH, as an act of helping and altruism, visited the affected people in the disaster zone and gave them food packages containing rice, cooking oil, macaroni, and various foodstuffs.

In addition to distributing food packs to 300 homeless families, the IHH team also came together at an iftar program with 180 Japanese Muslims at Tokyo Mosque, which was inaugurated by Turkey’s state religious authority in 2000.