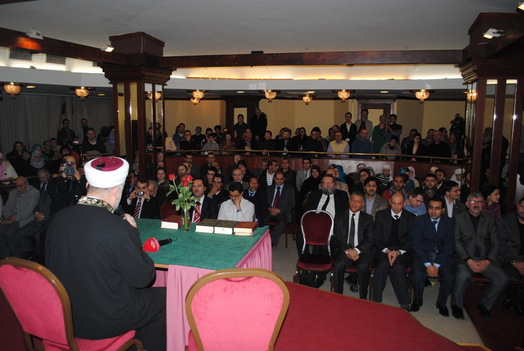 The publicity of the translated Quran copies into Hungarian language, happened with a great program after the 2 years of translation studies carried by the IHH's partner organization Hanif Islamic and Cultural Association.

Nearly 200 guests from Hungary and around the world participated to the program which was opened by the imam of Istanbul, Fatih Mosque, Hafiz Osman Sahin's Quran recitation.

In the program, the Iraq's ambassador of Hungary Dr. Kasim Asker Hasan, earned people's sympathy with his speech in three languages; English, Arabic and Turkish. Dr. Hasan whose mother is a Turkish, said that he was proud of this project, and he was very happy with the result.

Parliamentary Member of the Hungarian Jobbik Party, Márton Gyöngyösi said that he was very happy to be at the program and the people of Hungary should have included the East besides the West in their perspective because it was important to have healthy relationship with the Muslim communities and cultures for a democratic society of Hungary.

Another name that participated to the program was Seyfi Bozkus, The Counsellor for Religious Services of Tukey's Austria Embassy, thanked everyone who spent effort for such an important cause and expressed his pleasure.

The Priest of the Protestant Church Nemet Pal, talked about the history of the Quran studies in Hungary and emphasized the originality of the Holy Quran.

The founders of the Hanif Islamic and Cultural Association, Ahmet Barışçıl and Halime Zsuzanna who have also spent a great effort for this project talked about the translation process and thanked to the guests of the night for their presence.

The IHH Humanitarian Relif Foundation's volunteer Yusuf Armağan said that the project was deciced after a visit to Hungary during which they explored that there wasn't any translated Quran into Hungarian language. Armagan also noticed that the Hungarian translation of the Holy Quran will arouse interests towards Islam in Hungary.

After the speeches, the musicians of TRT Radio Channel performed selected works of Turkish Sufi Music for the guests.