Mavi Marmara martyrs commemorated at Sarayburnu
A 4th year memorial event was organized in Sarayburnu due to the attack that Israel carried out against the Mavi Marmara ship.
Turkey 02.06.2014

An event was held where the Mavi Marmara ship is now anchored, the event began with the recitation of the Holy Quran.

There were a large number of domestic and foreign participants at the program that included a cinevision about the blockade imposed by Israel and the Gaza Freedom Flotilla.

The Mavi Marmara ship was open to the citizens for visit, the photos of the 10 people killed in the attack and the banners “Free Gaza, Free Palestine” and “Palestinian people are not alone” banners were hung.

Ahmet Doğan the father of Furkan Doğan who had lost his life in the attack, told the participants in his speech that the longing for the martyrs is increasing a bit more with each passing day.

Doğan stated that the open air prison which is Gaza needs all sorts of assistance, and that new freedom fleets should be prepared.

Doğan said they had an appreciation of the struggles and pains of the martyrs healso said, “Mavi Marmara is the beginning of the end of Israel and Zionism”.

İbrahim Bilgen’s son İsmail Bilgen said that he feels the absence of his father, who had died four years ago more with each passing day.

Bilgen said that he had lost his father at a time he needed him the most and also thanked everyone who did not leave them alone on this path.

"IMPORTANT STEP ON THE PATH TO VICTORY"

IHH President Bülent Yıldırım said despite all the presssures and threats over the past four years they stood upright and were patient and owed gratitude to those who supported them.

Yıldırım explained that victory and freedom could be achieved through patience, courage and resistance and in relation to the recent court decision he said that “Mavi Marmara has passed a crucial stage on the way to victory. Now we are very happy and Israel is the unhappy one.”

Israel views the court as a “ theater” stated Yıldırım, “The court has made a decision. This decision is proof that we have won this war,” he said. 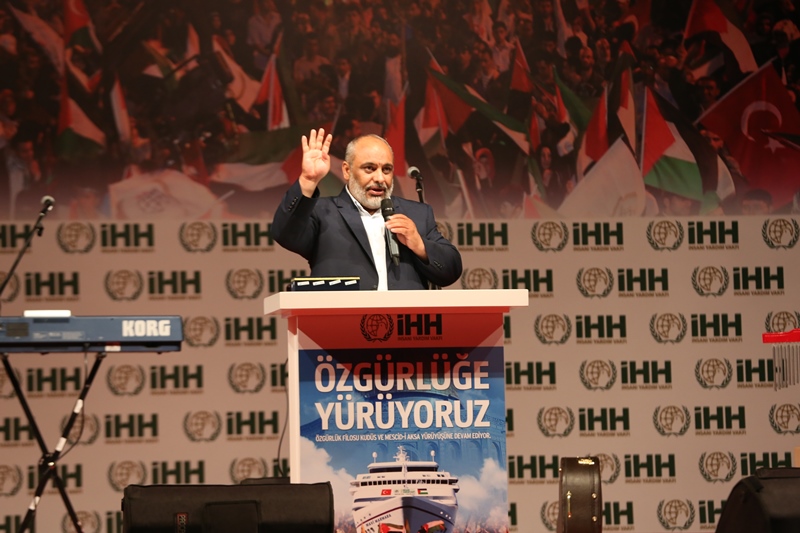 Yıldırım who criticized Israel’s refusal to acknowledge the courts decision declared that “You can mock the court ruling as much as you want but we will persevere in our pursuit for justice of the incident that took place on the 31st of May four years ago. Wewillmake a reckoning for the Palestinian women and children and for all Palestinians and we shall never waver in this struggle.”

Yıldırım addressed those who attended the event and the loved ones of the victims and martyrs of the Mavi Marmara with these words, “Do not worry we will see the end of Zionist tyranny and we will see the day where we shall pray at Al Aqsa in freedom.”

Yildirim’s speech was intermittently interrupted with the chant, “Zionist murderers shall answer” and “Allah is great.”

Due to rain the event had to come to a conclusion.