Mavi Marmara Ship Sent Off To Palestine With Prayers
Mavi Marmara ship has been sent off with prayers from Sarayburnu Harbor in Istanbul which will sail on to Palestine together with its 750 passengers to break the embargo and will deliver 10,000 tons o
Palestine, NorthCyprus, MiddleEast, Turkey 22.05.2010 Mavi Marmara ship has been sent off with prayers from Sarayburnu Harbor in Istanbul which will sail on to Palestine together with its 750 passengers to break the embargo and deliver humanitarian aid cargo to the people of Gaza.

Thousands have attended the send-off ceremony for the ship. The harbor in Sarayburnu was adorned with Palestinian flags all over. Thousands grabbed Palestinian flags and ran off to the wharf which the ship was anchored in. The ceremony almost turned into a grand protest meeting. Some women have donated their jewelry for the ship. Small boats and ferries accompanied Mavi Marmara through the harbor.

Important guests including representatives of political parties and NGOs, artists and business people were also present during the send-off ceremony of the ship.

Prior to the departure of the ship, speeches were given by the representatives of the NGOs from Malaysia, Kuwait, Algeria, Greece, England, Ireland and officials from Free Gaza Movement and IHH, the organizer of the “Palestine Our Route, Humanitarian Aid Our Load” campaign. 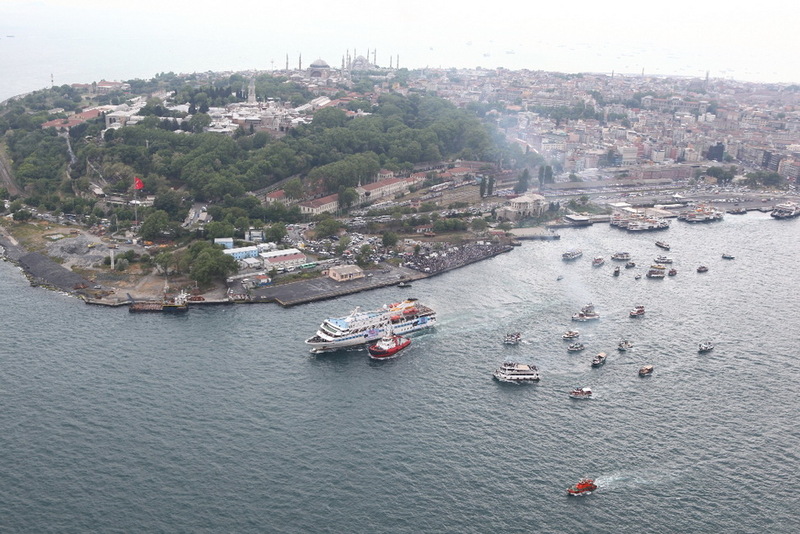 Yildirim: We will not step back.

Bulent Yildirim, President of IHH, started off his speech by saying his farewells to the crowd. Yildirim stated that they will not be affected by the threats of Israel and said “We are determined to arrive in Gaza. We will not step back. We have recently experienced an imprisonment with Izzet Sahin incident. Our friends Faruk Aktas and Bahatin Yildiz martyred while on a trip to Afghanistan for opening up an orphanage there. Within a month, we experience both martyrdom and imprisonment. May Allah be with us during our journey. We have the support and prayers of thousands of people together with us.”

Yildirim expressed their thanks to all political parties who gave support to the campaign including AK Party, Felicity Party and Great Union Party.

Also likening Israel’s treatment of Palestinians to the Hitler’s Holocaust, Yildirim said “Hitler set up prison camps in Europe. Now, Zionism is setting up a prison camp in Palestine. Here, I would like to address Israel: Come on and be wise in managing this crisis. If you try to stop this campaign, you will be isolate yourself from whole world, you will only harm yourself. These are humanitarian aid ships. They are not even carrying one jackknife onboard. There will also be women, children and the elderly onboard those ships. Those ships will also be carrying medical supplies and medicines. We will be carrying 120 different types of medicines onboard.”

Sheikh Raed Salah, the leader of Islamic Movement in Palestine 48, in his speech following Yildirim’s, spoke highly of the Prime Minister of Turkey, Recep Tayyip Erdogan. Salah emphasized that all Arab leaders should take Erdogan as their role model. He stated that Turkey supports Palestine both with its people and its government.

Representative of Mus, Parliament Member from Turkey, Seracettin Karayagiz of AK Party noted that Palestine has been completely turned into an open-air prison. He said “Weapons of Israel can never be more powerful than a bunch of determined people. Israel has been killing thousands of people, then they try to justify this by what they call ‘Islamic terrorism’. We do not accept that.”

Nabil Maruf, Ambassador to Palestine in Turkey also gave a speech during the event.

Following the speeches, the ship was sent off with prayers. Mavi Marmara ship will be arriving in Antalya after a 40-hour journey. Most of the passengers will embark on the ship in Antalya. The ships are expected to arrive in Gaza on the 26th of May, 2010, unless Israel tries to stop them.

The flotilla campaign consists of 9 ships.

Several international NGOs including IHH (The Foundation For Human Rights And Freedoms And Humanitarian Aid) and Free Gaza Movement have launched a humanitarian aid flotilla campaign to break the embargo which has been forced upon Gaza since 2006.

The aid flotilla consists of 9 ships in total, 3 of which are from Turkey, 1 from Greece, 1 from Ireland, 2 from England, 1 from Kuwait and 1 from Algeria.

Thousands of activists and NGOs from around 50 countries gave their support to the flotilla campaign, also known as “Palestine Our Route, Humanitarian Aid Our Load”. The campaign is the largest aid campaign to Palestine up to this date. The boats will carry loads of humanitarian aid items including medicines, medical supplies, cement, iron, precast homes, children playgrounds…etc. to Palestine. 10,000 tons of humanitarian aid cargo will be delivered to the region through this campaign.

3 ships have left Istanbul so far including 1 passenger ship and 2 cargo ships. The ships will meet the others that sail from Europe at international open waters.

The ships will sail on to Gaza from Antalya on Tuesday, the 25th of May, 2010. The flotilla is expected to arrive in Gaza within 24 hours from then, unless Israel attempts to stop the ships.