Mehmet has been our 30,000th orphan!
The number of orphans cared through IHH Humanitarian Relief Foundation’s Sponsor Family System has exceeded 30,000.
Iraq 10.05.2013 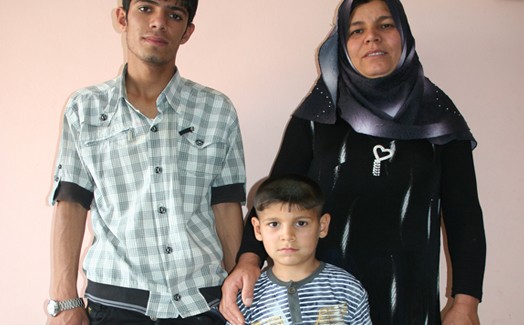 Happy Center executive board member Yavuz Altun said: “It is an Islamic and humanitarian duty to give support to orphan children and children without a family. Everyone should fulfill their responsibilities to this end. It is up to us to grow our children in a nice way. We call on all benevolent people to hold from the hands of orphans.”

Father of Mehmet who lives in Iraq’s Tuzhurmati region with his two brothers and mother was diagnosed with cancer in 2008. Although initial treatments gave hope to them about healing of their father, he lost his life. Back then, Mehmet was not even one year old. So, he does not remember his father and he does not know him at all. Mehmet’s brothers, aged 13 and 17, are both students. When they have time after school, they work in order to make a contribution to the family budget. Like his peers, Mehmet loves to play games. He wants to become a doctor when he grows up.

Orphans and children in need who first came to the agenda of IHH during Bosnian War (1992-1995) have not lost their priority for IHH for more than 20 years.

With the Orphan Sponsorship Support System launched in October 2007, IHH began to carry out orphan relief activities in a more systematic way.

According to UNICEF figures, there are more than 200 million children who are orphans or do not have a family.

Half of these children are deprived of the protection of a family and they live in streets where they face every kind of risks and threats. Holding the hands of these children who are in the pincers of organ and prostitution mafia and begging networks is a humanitarian duty.

As of today, 30,200 children across 42 countries are supported through the Orphan Sponsorship Support System. 3,407 of these children are in Turkey. IHH, which also has 15 orphan complexes in seven different countries, hosts 1,100 children in these facilities. Charity givers, if they would like to, make TL90 (38 euros) donation monthly in order to help an orphan meet their expenses for education, healthcare, food, clothing and accommodation.

There is an orphan waiting for you: Click to become a sponsor family.