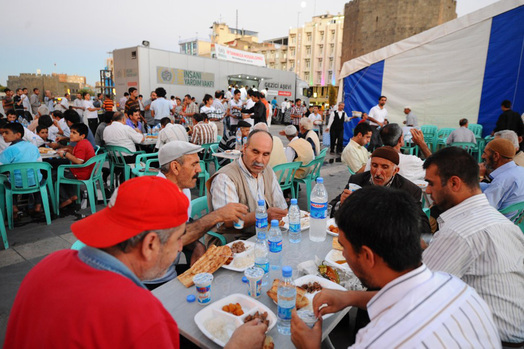 The kitchen trailer of the IHH Humanitarian Relief Foundation has been traversing Turkey since the beginning of Ramadan, offering fast-breaking dinners in cities on its route. It stopped by the cities of Siirt and Diyarbakır over the weekend to enliven the spirit of Ramadan.

The iftar dinner in Siirt was given in memory of İbrahim Bilgen, a native of Siirt who was killed in the attack on the Mavi Marmara boat. About 1,000 locals ate from the meal set on floor tables. Local MPs Afif Demirkıran and Yılmaz Helvacıoğlu also attended the dinner. Mufti of Siirt Faruk Arvas led praying that followed iftar.

In the next destination, Diyarbarkır, the soup kitchen offered iftar meals to 2,500 people at Dağkapı Square. Local non-governmental organizations supported the iftar organization. Alaattin Parlak, provincial chairman of Saadet Party, had dinner with citizens. Around 800 needy families were given food packs and 400 orphans received clothes.