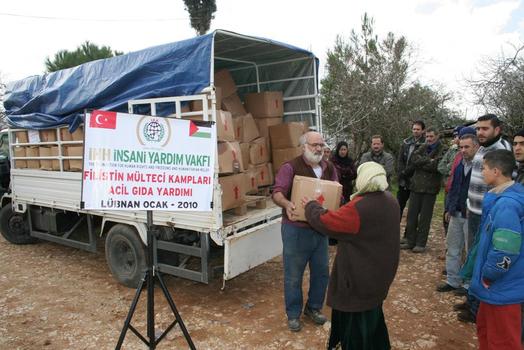 After Israeli occupation of their lands 450,000 Palestinians sought shelter in neighboring Lebanon only to struggle for survival here.

There are 12 Palestinian refugee camps in Lebanon and most of their residents are Lebanese-born and have never seen their homeland Palestine. Palestinians have been living as refugees in Lebanon for generations. They have no legal rights; they are not allowed to work in 72 fields and cannot own property.

The IHH distributed food packages and cleaning sets to 5,000 Palestinian refugees in 12 different camps. The families will be able to live on the foodstuff for a certain period. They thanked the people of Turkey over aid supplies.

The Palestinian refugees in Lebanon had closely followed developments about Freedom to Palestine Convoy. They shared their thoughts with Hasan Aynacı, IHH representative for the Middle East. They expressed their gratitude to all the participants for their contributions to the convoy and stated Israeli embargo would become meaningless with such initiatives.

In 2009, eighty Palestinians completed their training at the Istanbul Educational Center, set up by the IHH in Lebanese city of Sidon. Aqsa Medical Center is being built with IHH support in Nahr al-Bared camp in the city of Tripoli.