State agencies, civil society discuss E. Africa aid effort
A meeting was held at Çankaya Presidential Residence to better coordinate aid shipments from Turkey to East Africa, which is going through the worst drought in 60 years. The meeting was chaired by Pre
Somalia 04.08.2011 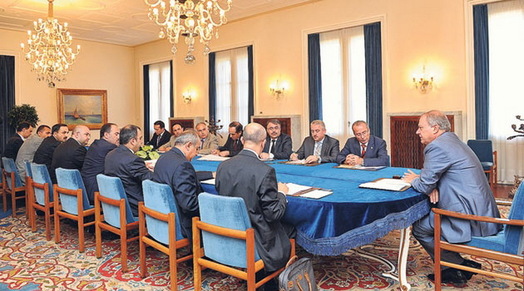 The meeting that was called by Turkish President Abdullah Gül discussed coordination of contributions and humanitarian assistance Turkey provides to fight deadly drought and famine in Somalia, Kenya, Ethiopia, Djibouti and Uganda. Yaşar Kutluay, deputy chairman of the IHH Humanitarian Relief Foundation, and executive board member Hüseyin Oruç attended the meeting at the Çankaya Presidential Residence as representatives of the foundation.

The meeting was attended by various state institutions such as the Prime Ministry’s Disaster and Emergency Management Directorate (AFAD), the Foreign Ministry, the Turkish Cooperation and Development Agency (TİKA), the Religious Affairs Directorate and the Red Crescent as well as civil society organizations such as the IHH Humanitarian Relief Foundation, Kimse Yok Mu, Deniz Feneri and Doctors Worldwide.

Presidential Secretary-General İsen recalled in his opening speech that President Gül has personally requested in the face of the worst drought in decades facing East Africa that aid efforts be coordinated swiftly and delivered to where it is intended for. The Presidency has no intention of directly coordinating the aid effort, İsen said, support will be provided to help deliver funds and aid in kind collected countrywide to the needy people in the region in the safest way.

“EFFORTS TO PULL AFRICA OUT OF HUNGER NEEDED”

Representatives of the state and civil society agencies attending the meeting agreed on the idea that the famine in East Africa and particularly in Somalia can be overcome with structural projects. Red Crescent Head Ömer Taşlı noted that they are working with Red Crescent Society of Somalia on the ground and were particularly helping to set up shelters in the region. İsmail Palakoğlu, deputy manager of the Turkish Religious Directorate Foundation, said the Directorate has been urging citizens to show more concern about the famine in the region by raising awareness around the themes “Neighborhood” and “Help Africa.”

ORUÇ: IHH REACHES ANY PART OF THE REGION

TİKA chairman Mehmet Yılmaz recalled the agency has launched a nationwide fund-raising campaign together with the Red Crescent Society, while Doctors Worldwide representative Kerem Kınık noted they were going to distribute first iftar meals at the camps in the region today. IHH board member Oruç stated the foundation was cooperating with local organizations and that way they were able to reach every part of the region conveniently. İbrahim Çiçek, head of the Ankara branch of Kimse Yok Mu, said they had a meeting with Somali officials the previous week to deliver humanitarian assistance to the region in the healthiest way. AFAD head Ejder Kaya said they have the capacity to coordinate all the aid efforts just as they did in Pakistan and Aceh before and recalled that ambassador Erdoğan İşcan from the Foreign Ministry has promised to provide any diplomatic help in coordinating the aid effort. Collecting funds and donations in a coordinated way, evaluation of transport option such as airplane and vessel and possible infrastructure projects to be realized following emergency relief works were discussed in the meeting.