IHH invited orphans from 13 different countries from around the world to Turkey. Their performances at the "6th International Children's Meeting " made guests live through emotional moments.

The finale of the "6th International Children's Meeting" organized by IHH Humanitarian Relief Foundation was held at the Sinan Erdem Sports Hall.

Many important guests attended the "6th International Children's Meeting" which was organized in cooperation with the Istanbul Metropolitan Municipality, Ministry of Culture and Ministry of Education. Deputy Prime Minister Yalcin Akdogan, Minister of Family and Social Policies Aysenur Islam, Minister of Education Nabi Avci, IHH President Bulent Yildirim, Esenler Mayor Mehmet Tevfik Goksu were amongst the many important guests who attended the program that evening. 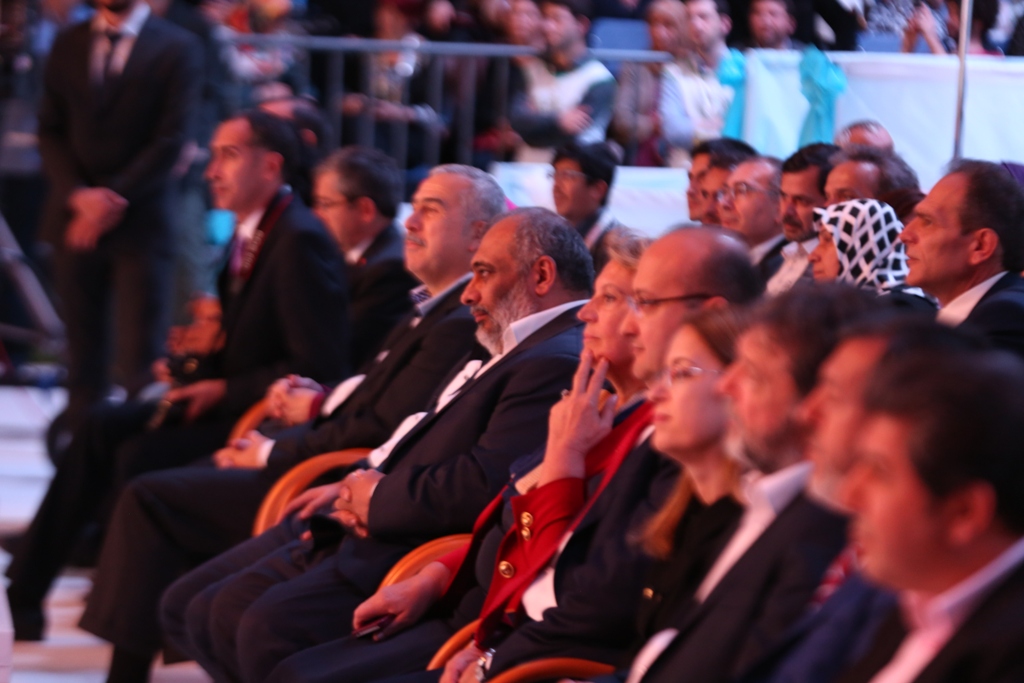 The program began with recitations from the Holy Qur'an and continued with a short film, about orphans, prepared by IHH. The children who came from different countries around the world wore their countries traditional clothing and performed traditional songs and dances on stage. The guests had an enjoyable time as the orphans performed. In order to create awareness about orphans, a "children's meeting" is organized every two years in Istanbul. This year orphans from Bosnia; Herzegovina, Albania, Mauritania, Somalia, Macedonia, Yemen, Syria, Palestine, Georgia, Kyrgyzstan, Pakistan, Sri Lanka and Tanzania met with their fellow brothers from Turkey at the Sinan Erdem Sports Hall.

IHH Humanitarian Relief Foundation invited orphans from 13 different countries from around the world to Turkey. Their performances at the "6th International Children's Meeting" made guests live through emotional moments. The program was broadcasted live in 132 countries.

The program began with recitations from the Holy Qur'an

The "orphan ceremony" at the Sinan Erdem Sports hall began with a Qur'an recitation read by one of our little guest from Africa. The children walked into the ceremony hall holding their countries flags as they were introduced to the guests. Soon after, IHH President Bulent Yildirim made ​​an opening speech. Yildirim said that from now on, the orphan children are going to speak while the elders listen.

Yildirm stated that there are four million orphans in the world and that every month they look after forty seven thousand of them. "We are trying to tell people about the issue of orphans in countries where our program is broadcasted. Take care of all my orphan brothers. This year lets aim to raise our sponsorship number from forty seven thousand to one hundred thousand" he said.

"According to our belief, it is our duty to look after orphans."

Deputy Prime Minister Yalcin Akdogan said that "Our faith does not define orphans as loneliness and desolation. It defines orphans as the children of the ummah and the nation. Our Prophet (peace be upon him) was an orphan. According to our belief, it is our duty to look after orphans. Our ummah has been ordered to do good from cradle to the grave. Throughout our lives we have to do good."

"It is our duty to look out for anyone who is a victims and are vulnerable."

Akdogan continued his speech by quoting Nazim Hikmet: " Nazim Hikmet says; 'children who die are unable to grow.' But a child who lost their mother and father grows unconditionally. Especially, if they have a sibling which they need to grab a hold of, they are forced to act like their mother and father. They suddenly become the families elder and the heavy weight of the world is piled upon their shoulders. This is why we should not leave these children alone. A baby is a symbol of innocence. Those who murder babies are actually targeting humans who are for innocence. They are murdering humanity. Sometimes they ask us, why are you so uninterested in many areas. Why are you putting out a lending hand everywhere. Our response was, this is what our ancestors used to do. Wherever we went to help, we saw that our ancestors went there to help previously. Providing help is our moral and conscientious duty. We can never turn our back to anyone nor close the door on their face. 1.5 million refugees came from Syria to Turkey. It is our duty to look out for anyone who is a victim or are vulnerable. Some countries may see this as a social event. The help we provide is a moral stance for us and we will continue to do it out of spite. We will fight to uphold justice as well. They are disturbed by us going to the Middle East to help. They are disturbed by the fact that Turkey is helping the Middle East to gain social events. When we go out to help, we do not go there to see if there is petrol or gold. They are unhappy with Turkey achieving in social events. 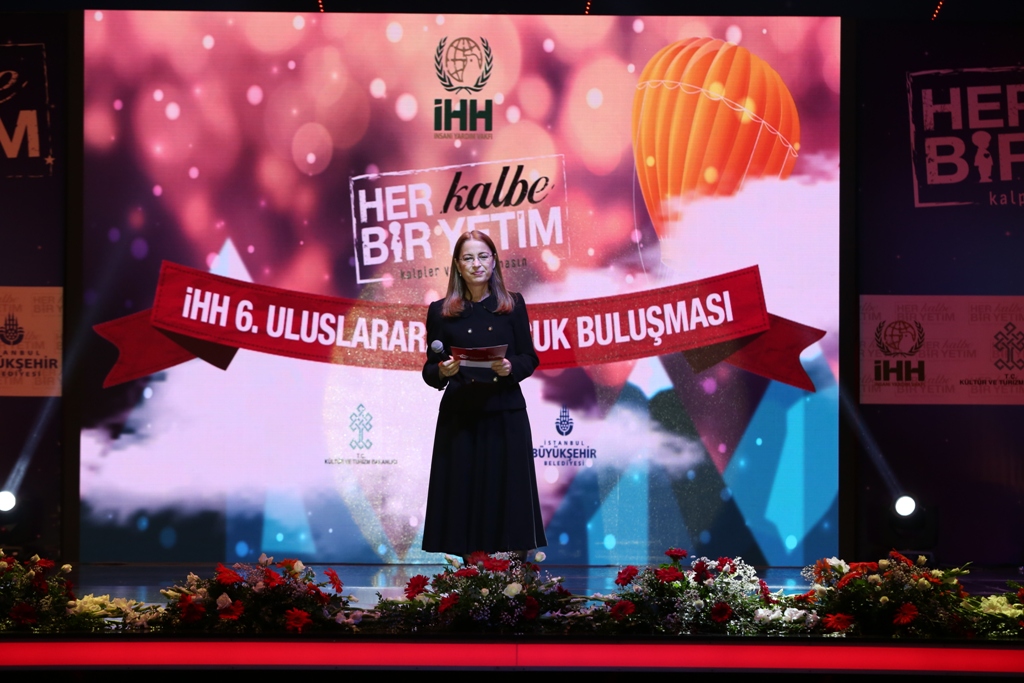 "We know that more than five million children are affected by war in Syria."

The Family and Social Policy Minister Aysenur stated that she was honored to take part in the 6th International Children's Meeting via IHH. She also said that "It is a very nice feeling to be here today with the children from our country and all over the world. No matter where in the world they are from, orphan children have been entrusted to the whole of humanity, especially to the Muslims. Looking out for orphan children are one of the fundamental problems for humanity. War and natural disasters effect children the most. According to official figures, over two hundred million children worldwide and in reality, between four hundred to five hundred children are left orphaned due to natural disasters, war and many other similar situations. Orphaned children are the easiest prey for those who deal with begging, prostitution and theft gangs. We know that more than 5 million Syrian have been effected by war. Last year there was 260 thousand asylum seeker children. This year, the figure has reached 1.5 million. What brings us together is the one thing we all have in common. We all want to join our hands and put out our hearts for these children."

Ahmet Gundogdu, Memur-Sen Chairman also said that accidents, natural disasters and wars are all causes for the number of orphans to increase across the world. He mentioned how natural disasters and accidents are unavoidable however war can be prevented. Therefore, "the journey to a greater Turkey needs to be speeded up."

Gundogdu, who pinpointed the importance of caring for orphans also stated that " if they are not taken care of they will fall into the hands of organ mafias, missionaries and prostitution gangs. As a nation we cannot have the mentality where ' you'll extinguish the fire which occurs in your own homes but won't care about the fire which occurs in your neighborhood.' A child will become an orphan if their mother or father passes away but if this Ummah does not care for these orphans, that's when they will really become orphans. Looking out for orphans means looking out for our future, it is a good that we are doing for ourselves.

"Each class has an orphan fellow"

During the program, Nabi Avci the Education Minister thanked 3 schools for supporting the most orphans in the "Every class has a fellow orphan" campaign and awarded them with a plaque. Avci, thanked everyone who contributed to the organization including teachers, students, everyone who encouraged them and IHH.

The campaign is organized in cooperation with the Ministry of Education, Ministry of Religious Affairs and IHH. Within the scope of the campaign during the 2013-2014 educational period, 7000 classroom activities were carried out in 80 provinces and 2084 schools and 7000 classes.

"We are the ummah of a prophet who was an orphan"

After the speeches, orphans who came from different countries around the world displayed traditional performances. During the end of the program artist Omer Karaoglu and the tiny hearts choral performed an enjoyable concert for the guests. 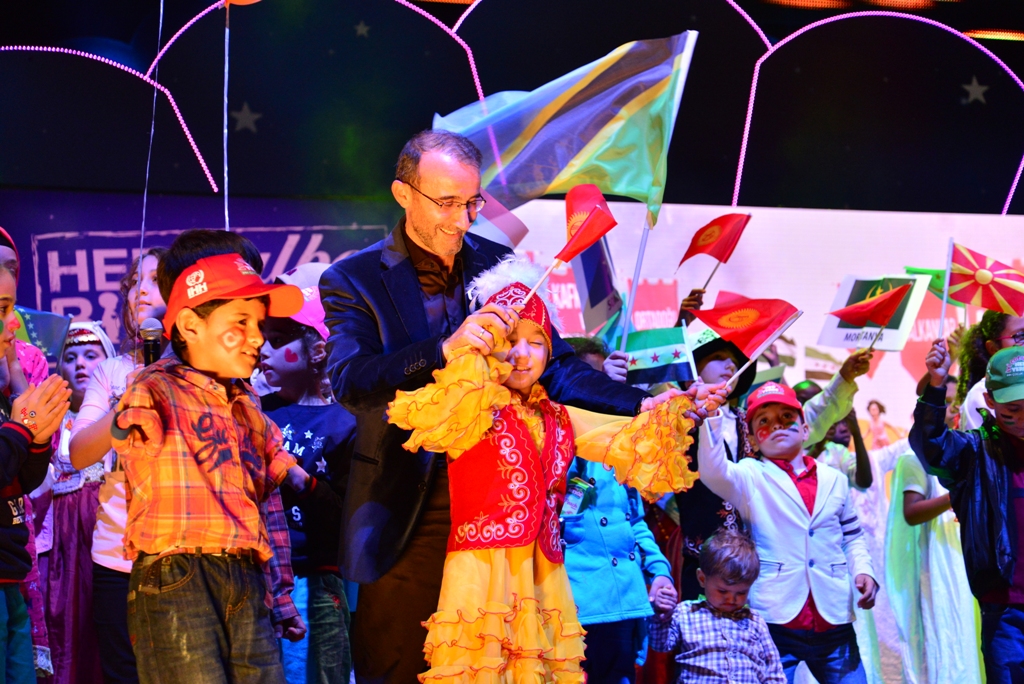 There was a big turnout

War, crisis, conflict and natural disasters were some of the reasons why these children became orphaned and needed to be looked after. In order to settle the concept of orphans to the subconscious of people, the 6th International Children's Meeting was organized. Great interest was shown to the organization. Guests who filled the Sinan Erdem Sports Hall made donations for the orphans. IHH was prepared in all areas for the show which lasted for four and a half hours. A loh board which was used to teach the children of Africa the Holy Quran was gifted to Yalcin Akdogan, Aysenur Islam and Nabi Avci.

Guests who came together on the evening went home with the desire to come together once again for another orphan meet-up.

IHH Humanitarian Relief Foundation comes together in Istanbul with different children from around the world, once every two years for the International Children's Meeting which is supported by the "Sponsor Family System.