The whole of Turkey compete to provide aid to Gaza
The campaign that was launched with the leadership of IHH and the support of many television and radio stations was a part of a live joint broadcast last night and ended up by collecting 12 million lira's by SMS and phone calls.
Palestine, Palestine-Gaza 05.08.2014 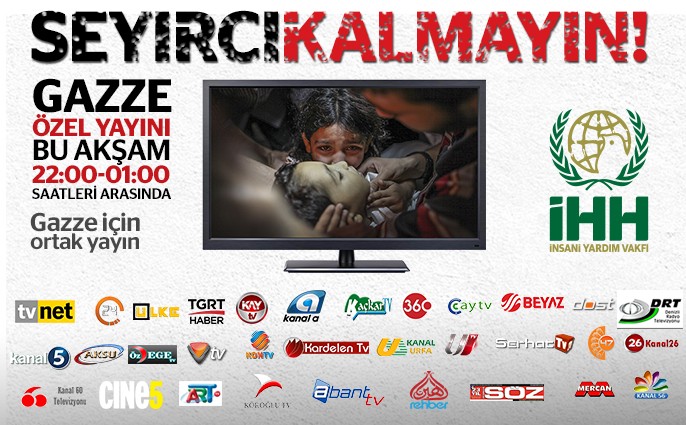 The campaign that was launched yesterday with the leadership of IHH and the support of many television and radio stations was a part of a live joint broadcast last night and ended up by collecting 12 million lira's by SMS and phone calls.

With the live broadcast of various national and local TV channels and radio stations between the hours of 22:00 and 02:00, the whole of Turkey competed to provide aid to Gaza. Businessmen, representatives of NGO's, artist, academics, journalists and authors participated in the program by donating. Thousands of citizens that connected to the broadcast contributed to heal the wound in Gaza.

Citizens in front of their televisions made donations of 5 TL by sending a SMS to 3272 to support Gaza and the campaign "Be a Remedy for Gaza" with the slogan of "Don't be a Spectator". Due to the intense interest which led to the phones being engaged, donors were redirected to IHH's call center on 0212 631 21 21.

Children who joined the campaign over the phone said they have donated their pocket money. 5 year old Mehmet called from Uşak and said that he would like to donate his pocket money. Students from various schools participating in the program also donated the money they have been saving in their moneybox. Students called out to their peers watching the program to join the aid for their friends in Gaza.

A citizen who connected to the studio generated a great impact with their help. The donor stated that they are from an Israeli descendant and also announced their donation of 2 thousand dollars to Gaza at the beginning of the program. Sinan Ahmet who was onboard the Mavi Marmara ship during Israel's attack, thanked the Turkish government and people in regards to the campaign and donated 60 thousand dollars. A person who connected to the broadcast from South Africa said that the Ummah supports Gaza and donated 200 thousand dollars. Within the campaign scholarships were awarded to a thousand orphan children.

MEHMET KAYA CANNOT ATTEND HIS DAUGHTER’S WEDDING
During the program a live broadcast to Gaza was conducted. IHH Palestine Representative Mehmet Kaya provided information on the latest situation in Gaza and also thanked all those who supported the campaign.

Kaya, expressed that he cannot attend his daughter's wedding and said that "Being hereevery day is a reward for us. I wanted to be at the wedding, I am saddened. My Lord gave a Gazan martyr's son as a groom and a second son to us. But the things we are going to do here are not things that we can find all the time. I believe that I have to be here at the moment. Every minute that we are here is a reward for us."

The screen that was set-up in the studio showed the images of the people who died, were injured and the demolished buildings due to Israel's attacks.

Speaking at the program, IHH President Bülent Yıldırım, drew attention to the fact that in the Islamic world only in one day close to 3 thousand people died and the whole world remained silent.

Yıldırım reminded of the women in East Turkestan who were taken from their homes because they were reading the Qur'an, and said "Their husbands went after them but they killed them as well. Due to this, there was a clash and two villages have been demolished. This is the state of the Islamic world. Who will take care of this, we are going to take care. On one side you have East Turkestan, one side Gaza, Syria, Iraq, Afghanistan...all of them are looking at us."

Yıldırım, expressed that he is delighted with everyone’s sensitivity and said “Which every period Zionism is in control of is the time when there is a lake of blood in the world. That is why Zionism's terrorist organization should be eliminated. They are children and baby killers."