Thousands walk for their Egyptian brothers in Istanbul
Thousands of people in Istanbul protested the death sentence decision of 529 innocent people in Egypt and the coup d'etat government there.
Egypt 11.04.2014
IHH Humanitarian Relief Foundation and Özgür-Der (Association of Free Thought and Education Rights) organized a protest walk in order to condemn the death sentence decision of 529 people in Egypt.

The protest started after the Friday Prayer in Fatih Mosque and thousands of people attended to it. Activists unfurled a huge banner on which there are the names of the 529 people sentenced to death. Than they walked with the banners and slogans in their hands. Carrying banners written: ¨Stop Death Sentences¨, protesters came to Saraçhane Park shouting slogans: ¨Go away Sisi, we are with you Morsi¨, ¨Gallows cannot intimidate Ikhwan¨, ¨Long live Ummah Solidarity¨, ¨Islamic Movement cannot be prevented¨ and ¨In Syria and Egypt Muslims are standing up.¨

¨Death Sentence Decision is a Shame¨
Making a statement on behalf of the activists, the president of Özgür-Der Rıdvan Kaya said ¨We do not recognize these people newly. Don't be surprised for the incidents and the death sentence decision. This is how the law of the pro-coup mindset is. The unlawfulness they carried out on 3rd July when they staged a coup, massacres they carried out in Adawiya on 14th August, those spraying bullets on people in the streets, those strangling atrociously 37 people in police van. All these showed us what is the habit of tyrants. And now with this decision, they showed to the world once that they know no limits in cruelty. All the humanity has gone into action and all the world is standing against this cruelty. And we say ¨It's about time!¨ for it.¨

Interrupted by slogans often, Kaya ended his speech ¨As Muslims in Turkey and as ummah, we have been in the streets since 3rd of July. We condemn those people who are silent against this  cruelty. We have behaved so until now and we will do the same from now on.¨ 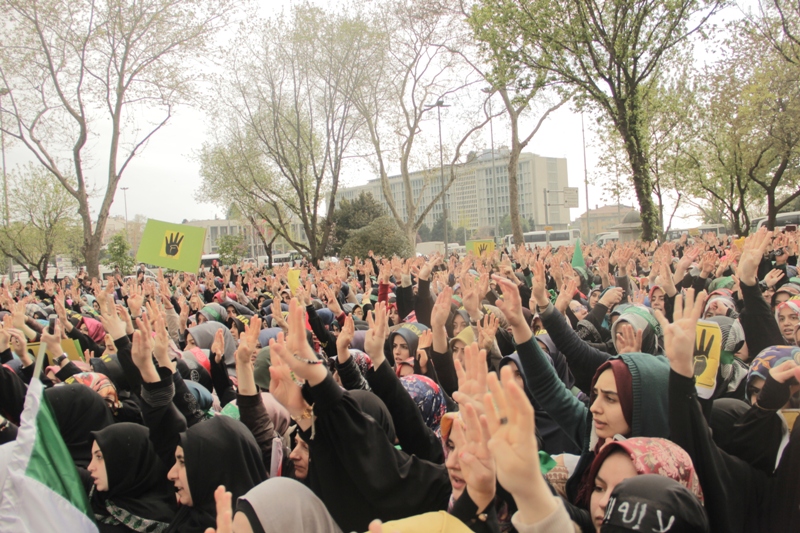 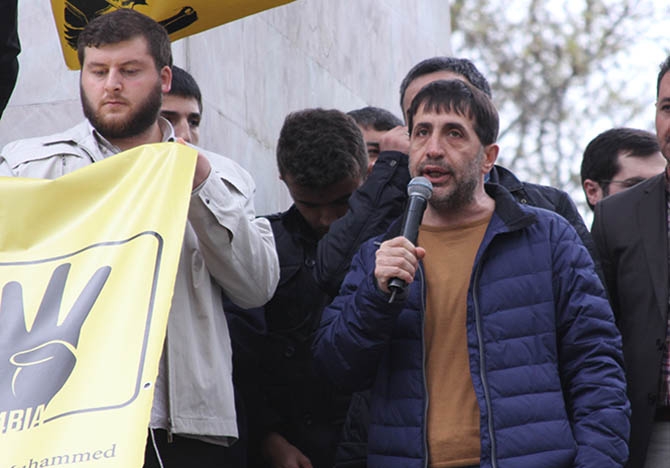 Describing the silence of western world to the death penalty decision in Egypt as ¨double standard¨,  Atalay assessed the act of Amnesty International even if it's late as a pleasing development. Atalay said Egypt has a private place in the Islamic World and it has been paying price for its belief and values for a long time.¨ Atalay thanked to AK Party, CHP, MHP and BDP that are condemning the death penalty decision in Egypt.

The deputy of Muslim Brothers (Ikhwan) in Egypt Adil Raşid gave a thank you speech to the activists in the area and expressed his contentment for the support Muslims in İstanbul have given for their brothers in Egypt. Raşid asked Muslims to pray for Egyptians and continue their support for them and said the struggle in Egypt will continue by the end.¨
After the speeches, ¨Group Yürüyüş¨ sang some chants and marching music and expressed its support for their Egyptian brothers.
Approximately 5000 people attended to the protest which ended with the prayers for Egypt.