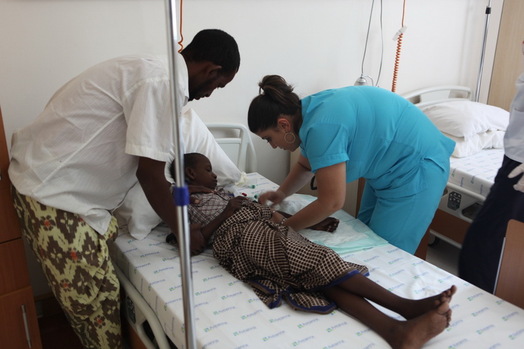 Scores of Somali children easily become sick due to malnourishment in famine-stricken Somalia. These children cannot be given the necessary medical treatment due to lack of medical infrastructure in the country. Fourteen Somali children who include a four-month-old baby will be sent back to their countries following the completion of their treatment in İstanbul. The oldest one of the children is 13 years old.

The children, who were brought the Avicenna Hospital at around 3.30 a.m. on Wednesday by ambulances from the airport, are accompanied by 13 people who are their relatives. A Somali origin doctor also accompanies the children in Turkey. After they arrived at the hospital, Somali children were accepted in the patient’s rooms where they had a rest until the morning under the supervision of doctors. An intense treatment program is in progress for the children at the hospital.

Two of the children are in need of urgent medical intervention. Among the children, there is also one who has various diseases from the birth.

The medical staff at the Avicenna Hospital, the doctors and nurses, is doing their best to make Somali children to feel at home.

The youngest one of the Somali children is Hani Ahmet. He is just four-month-old but he weighs just three kilograms. Hani Ahmet came to Turkey with his mother and is receiving treatment now. Hani’s mother left her six children behind in Somalia for the treatment of her youngest kid. Living in a village in Mogadishu with her seven children, the mother, Fatima, said her husband is alive but he does not have the chance to live with his children as he is always outside looking for food. Fatima said her husband entrusts his children to Allah.

Muhammad Sharif Osman, 37, who travelled to Turkey for the treatment of his 3-year-old son Abdullah, is an English teacher. He lives in a village which is 13 kilometers away from Mogadishu with his six children. Abdullah suffers from heart failure. Leaving his five children with their mother back in Mogadishu, Osman said people eat once in a day or none in Somalia, adding that there is much for which we need to thank Allah.