Truckloads of aid reach Syria
Trucks, loaded with food for Syrians and set out from Turkey last week, have begun to reach Syria.
MiddleEast, Syria, Turkey 05.01.2013 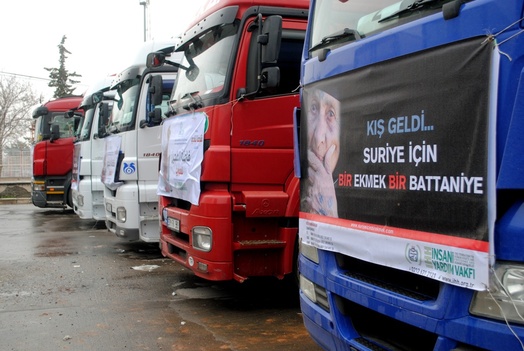 The trucks, which were sent to Syria from İstanbul as part of the “Winter is coming… Bread and blankets for Syria,” aid campaign, have begun to reach border gates.

Fifteen of the 33 trucks which set out from İstanbul have already arrived in Syria.

The 15 of the 33 trucks, which moved for Syria from İstanbul in an organization led by IHH Humanitarian Relief Foundation, passed from the Öncüpınar Border Gate in Kilis province and reached Syria’s Esselame Border Gate.

Donations from charity givers for Syria on the occasion of the “Winter is coming… Bread and blankets for Syria” aid campaign, organized by around 300 non-governmental organizations, continue.

Fifteen of the trucks, which arrived in Syria, took various relief items including flour, blankets and other basic things to the Syrian people.

The trucks which will gather at the Esselame Border Gate will move to different parts of Syria following a count.

Nidal Molla, an official from the Syrian Turks’ Education, Culture and Solidarity Association, said each of the trucks carry 24 tons of flour and a big number of blankets.

Three truckloads of flour from İzmir

In addition, women from the İzmir Özgür-der and İzmir İHH offices sent three truckloads of flour to Syria.

We need to be more sensitive

Making a statement at the Kilis Öncüpınar Border Gate, deputy Chairman of IHH Osman Atalay said there is an ongoing humanitarian tragedy in Aleppo and other parts of Syria and the necessary action needs to be taken not to remain as an onlooker to this tragedy.

“In the wake of the massacre and killings in Bosnia, Turkish people and civil society organizations showed a lot of sensitivity. A massacre similar to the one in Bosnia, is taking place in Syria today. So, as civil society organizations, we need to be sensitive and careful. Around 6,000 people were living in tents in Azez as of last week but 4,000 more people joined them over the past several days due to heavy bombardment in the rural parts of Azez and Aleppo. There is a serious cold nowadays. Those living in tents are in a very difficult condition. Women and children have begun to suffer from diseases. We need to think about these. There is no electricity and diesel oil. There is a heating problem in the tents. There are children and old people in those tents. We think that people living in nylon tents will no longer be able to remain healthy,” Atalay said.

“Flour on the trucks sent from Turkey will be loaded to other trucks that will come from Aleppo and then will be sent to Aleppo. There is interest in this aid campaign not only from İstanbul but also from many parts of Turkey such as Bursa, İzmir, Giresun because living circumstances in Aleppo and Syrian territories get more difficult every passing day. There is a serious hunger threat for those living in Syria. A hunger problem is awaiting 10 million people. There is no flour, no yeast. Even if these things had been available, there is no electricity for baking. There is no diesel oil, so making bread gets more and more difficult every day. There is another threat awaiting Syria. With the arrival of winter weather, diseases are likely to hit children and old people. There is a serious risk of outbreak of diseases due to lack of heaters,” he added.

In the meantime, while sounds of explosions in Syria can be heard on the Turkish side, aid distributions are made under bombardments.

Deputy offers thanks to IHH

Atalay informed Justice and Development Party (AK Party) deputy Şamil Tayyar who visited the Babusselam Refugee Camp, about IHH’s relief activities for Syrian refugees. He said IHH delivers hot meals to 6,000 people every day and delivers winter relief to the refugees. Tayyar offered his thanks to IHH for its efforts.