Turkel report or Israeli defense
Following its bloody raid on the Mavi Marmara last year, Israel had to investigate its own crime and established the Turkel Commission to investigate the attack. The report prepared by the commission
Palestine 04.06.2011 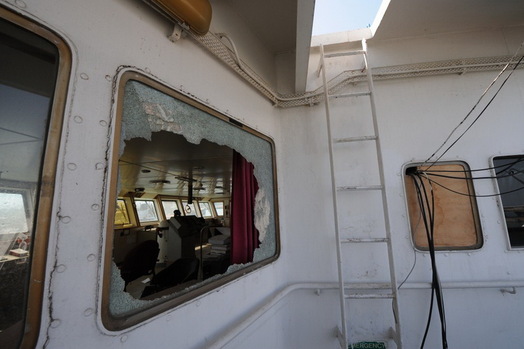 Following the strong reactions Israel has drawn over its attack on the humanitarian aid flotilla in international waters, the country had to establish an investigation commission. The commission led by retired judge Jacop Turkel prepared a report about the Mavi Marmara attack. The report was prepared to be submitted to the UN fact-finding mission. Israel prepared this report to confirm its own arguments.

Israel, which seized all camera footage belonging to the passengers and evidence on the ship and refused to share them with international investigation commission and courts, covered only the statements of its own soldiers in its report, which severely damages the impartiality of the report. Israel’s report claims that the travel of the flotilla in international waters was illegal from the beginning and the activists on board the ship began resistance even before the Israeli soldiers opened fire on them. The report claims that Israel acted within the boundaries of the international law. Going further, it even alleges that the Israeli soldiers were engaged in self-defense.

Israel’s report shows that members of the commission preparing the report acted like a “defense lawyer” and not as a “judge.” The language in the report which sometimes turns aggressive and accusatory makes the report more like a defense statement than being an objective report.

Israel’s “defense,” was written with a defensive language which aims to respond to the findings in the UN’s and Turkey’s reports. The report includes manipulation efforts more than judicial assessments. Still, Israel’s feeling obliged to prepare a report about its own action, despite the fact that this report is very inadequate, shows that the world is slowly changing after the Mavi Marmara incident.

Please click to read about the contradictions in Israel’s Turkel report and other reports’ findings.