'Winter arrived, bread and blanket for Syria' campaign
We give support to an aid campaign launched to provide food and shelter from the cold to Syrian refugees.
MiddleEast, Syria, Turkey 26.12.2012 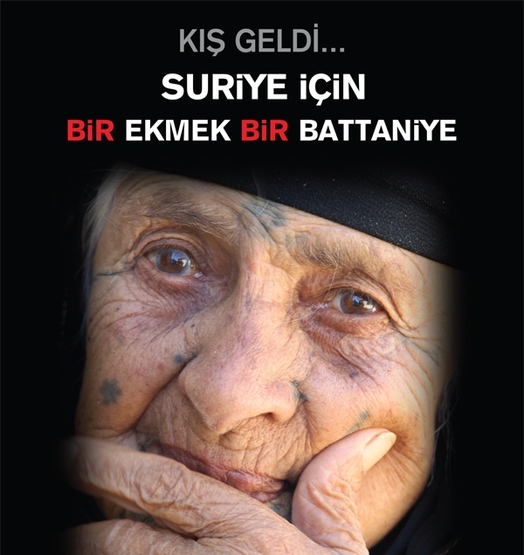 As IHH Humanitarian Relief Foundation, we support the “Winter is coming… Bread and Blankets for Syria” campaign.

IHH, which has been taking various relief items to Syria in order to meet the needs of Syrians since the start of the public unrest in the country, continues to fully support aid campaigns for this country.

Non-governmental organizations in Turkey have taken action to send “bread” and “blankets” to the Syrians who were forced to leave their homes due to the civil war in their country.

Many foundations, labor unions and other organizations have taken action in Turkey to extend a helping hand to Syrians who try to continue their lives under very difficult circumstances with the arrival of winter. The non-governmental organizations, which jointly launched the “Winter is coming… Bread and Blankets for Syria” campaign, seek to collect aid for Syrians from across Turkey and the world.

The non-governmental organizations launched the campaign over the www.suriyeicinbirekmek.com and www.breadforsyria.com websites which broadcast in Turkish, English and Arabic. They aim to make a call for aid to Syria with TV films and banners.

“Bread, flour went out of stock while debating in vain”

An article on the website of the campaign underlines that humanitarian tragedy in Syria has become worse with the arrival of winter. “Winter has arrived while debates are taking place as to who is right or wrong and whose side should be supported. Winter has arrived, bread ent out of stock and no flour remained while the United Nations, European Union, the Arab League and many other organizations make meaningless debates.”

“Winter has arrived and rain fell while the Syrian problem continues to be debated on TV screens within the context of politics, geopolitics, religion, sect and many other decorated matters. They are getting soaked, cold has arrived and they have nothing for heating and no blankets. The sad reality of life sits in front of us beyond all debates. This elderly Syrian woman refugee waits for a loaf of bread to eat and a blanket to warm up. It does not matter who you are, help at a time when winter has arrived,” says the article.

According to the website, those who want to make donations for the campaign will be able to do so through the aid organizations supporting the campaign. One of the ways to participate in the campaign is through communication. “Be a volunteer to promote this campaign and collect aid items. Get in touch with an aid organization and work actively on the ground. If you have no opportunity to work on the field, continue to promote the campaign in social media and other communication platforms,” it says in the website of the campaign, adding: “If you are unable to do anything, please pray so that this human tragedy ends.”

Campaign aims to reach out victimized Syrians outside of Turkey

The organizers of the campaign describe themselves as “humans making efforts to find a remedy to the problems of Syrians going through a humanitarian tragedy.”

“No one individually is an owner of this campaign but everyone is a partner. This platform is open to all civil society organizations and individuals from all segments of life. All aid materials collected will be sent immediately to the Syrian refugees in Lebanon and at the Jordanian border as well as to civilians in Syria,” it says in the campaign’s website.

Number of supporting NGOs to exceed 200