You too ¨Be Remedy for Gaza¨
IHH Humanitarian Relief Foundation and Palestine Students Platform announced that they started a medicine campaign for Gazan people with the slogan of ¨Be Remedy for Gaza¨ who are living under the blockade and in the absence of medicines.
Palestine, Palestine-Gaza 31.12.2013 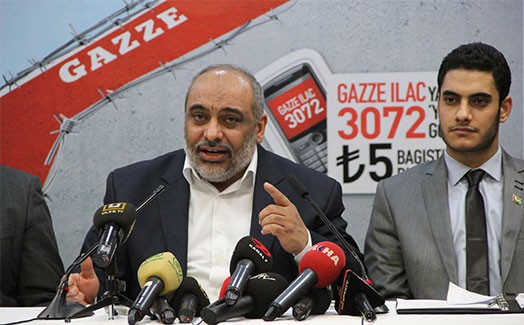 IHH Humanitarian Relief Foundation and Palestine Student Platform held a press conference related to the campaign they started together named ¨Be Remedy for Gaza¨.

Speaking in the conference which is held in the IHH Headquarter, Bülent Yıldırım the President of IHH Humanitarian Relief Foundation expressed that there are blood and tears in Gaza, Egypt and Syria al and said ¨Turkey has to do something about it.¨

Remarking that AK Party government has wanted to help people living in these regions, Yıldırım said ¨However Zionist Neo-cons don't let this. If we were able to help Gaza, instead of dealing with the conflicts in Turkey, they wouldn't be hitting Gaza now.¨

Referring to the words of Lieberman for IHH as ¨a threat for Israel¨, Yıldırım continued as: ¨Yes it is. Because you are black hearted. If you were living in Gaza, we would also be giving medicines to your children, wife and mother. However, you blocked all the roads through which we can transfer humanitarian assistance. You are Hitler. You and your cabinet are committing an offense by carrying out genocide. Medicines are allowed to be transferred even in the war, aren't they? But you cut off the electricity, you don't allow anyone to send medical assistance. So how will the hospitals take care of people?¨

Yıldırım expressed that while Israel and Neo-cons are doing this, some others try to put those who help Palestine to the terrorist lists. He said that ¨When I look at your faces I see children trying to live without electricity and medicines. Should we organize ships and convoys again? You surpassed the occupant Israel.¨

¨Egypt, Palestine And Syria Will All Be Free¨

Addressing leaders and petrol sheikhs in the Islam world, Yıldırım said ¨What about you? All of you are silent. Because you have surreptitious relations with Israel. If you want, you can put pressure on Israel, but you don't. Those who help Palestine will receive help of God. Egypt, Palestine and Syria will all be free. God will give those who contribute these freedoms their dues.¨

Yıldırım said that ¨Some impertinent from Israel assume that they have mended their fences with Turkey. Watch out that Israel apologized from us but it didn't remove the blockade. Moreover some Brutus' inside hit us, also. A judge in Kayseri dismissed the action which has been brought for Furkan Doğan on the grounds that ¨Israel cannot be judged.¨ It is not possible to fix the relations unless Israel remove the blockade. It is still killing children there. There are Israeli citizens even boycotting their own countries. They aim isolating Israel by boycotting it in every field. So that Israel may be forced to give up cruelty. But some people inside us say that ¨give up this boycotting.¨

Addressing occupant Israel and Gaza people, Yıldırım said “Look! I am addressing occupant Israel here. Allow medicines, foods, building materials to be transferred to Gaza. Otherwise all the world will make a move. I am also addressing Gazan people: Hearths of two thirds of the world population are with you. Many Israelis are going into action against these Zionists. Don't worry. Inshallah these relieves will be delivered to you. We will go into action as thousands of people and NGOs. I admire Palestinian people. They are the honor of all humanity, they protect al-Aqsa Mosque. Join hands. Don't let those who want to create troubles inside you.¨

How Can You Help?

¨Supporting the campaign named ¨Be Remedy for Gaza¨ organized by the IHH Humanitarian Relief Foundation and Palestine Students Platform will be possible by donating to the IHH's bank accounts or you can do an online donation by using the IHH's website.¨

More than 65 per cent of the medicines are collected

Speaking for Palestine Student Platform, Kerim el Astal implied that the blockade is continuing in Gaza. He said ¨Electricity is given to the region for just 6 hours. No humanitarian relief reach to Gaza. Bombardment continues at intervals. The most important problem is medicines. More than 65 per cent of medicines are finished. Today we started a medicine campaign. We cannot be a mere spectator to this situation. We will announce how should the relieves be done in the following days.¨

President of Palestine Solidarity Foundation Muhammed Mseniş said that ¨I thank to IHH and Palestine Student Platform. The timing of the campaign is important. The infrastructure of Gaza is finished. We talk about a region that is dependent on humanitarian aid. Turkey always has looked after the region. Cause of this grievance is not only Israel but also the international world that has been a mere spectator to the happenings.¨ 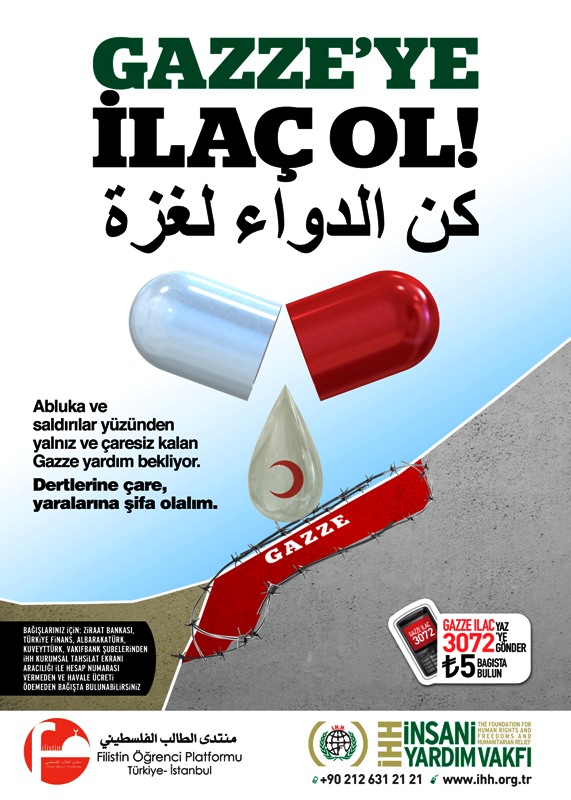