Prior to boarding, a common prayer was offered in Kepez Sports Hall, in addition to supplications to God for their safe arrival in Palestine.

A funeral prayer in absentia was also offered for Faruk Aktas, IHH’s representative to Asia and Bahattin Yildiz, IHH volunteer, who both lost their lives in an airplane accident in Afghanistan 10 days ago.

Bulent Yildirim, President of IHH, in his speech following the funeral prayer, said that they embarked on this journey in order to bring hope to those who are in need. “We would go there to help the oppressed whether their religion be Christianity or Judaism. We are on the side of justice and peace. Because we have conscience. God willing, the embargo on Palestine will be broken. As a result, we will experience Badr or Uhud or maybe even Hudaybiyya. Do not hesitate even for a moment, the result will be victorious.” 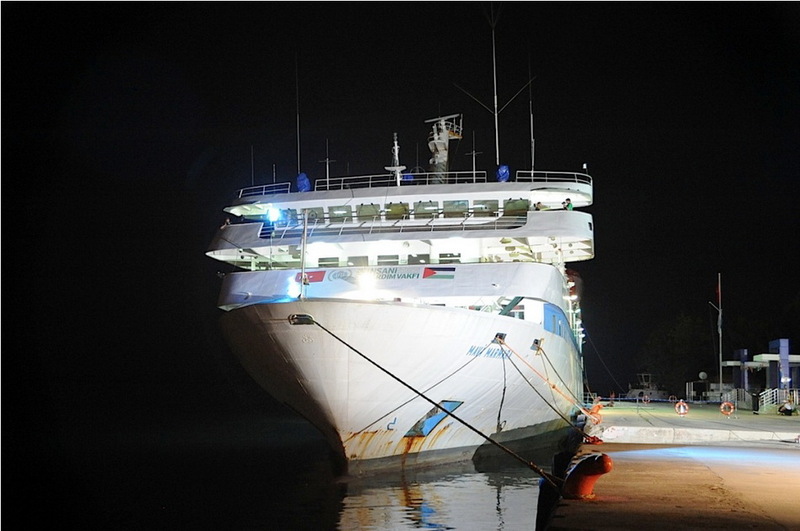 Yildirim pointed out at Israel’s statement on that they will treat activists separately according to their origin and nationality. Yildirim said “They have prepared the harbor. Apparently, they will arrest us and haul us there, keeping Palestinians and Arabs for longer and releasing us after interrogations. They are ignorant of the fact that we will never leave any of our brothers behind. We started this journey with the motto ‘all or nothing’. Greeks, Brits, the Irish, Kosovans, Bosnians, Austrians, Tartars, Kuwaitis, Algerians, Malaysians, Indonesians they are all with us. We will not sacrifice any one of our brothers. We will never let that happen. We are going to resist and resistance will win, I have no doubt about that. We do not accept any other harbor. Neither Israeli harbors nor the Egyptian ones, our destination is Gaza harbor. Absolutely Gaza and only Gaza!”

Following Yildirim’s speech, the convoy consisting of dozens of buses came down to Antalya harbor. Here, activists and staff members of the Foundation have boarded the ship “Mavi Marmara” together with slogans and prayers after saying goodbye to their loved ones. The ship sails off tonight to meet up with 8 other ships waiting for the convoy from Turkey in the middle of the Mediterranean before heading to Gaza.

“Freedom Flotilla” to Gaza consists of 9 ships in total, 3 from Turkey, 2 from England, 1 from Ireland, 1 from Algeria, 1 from Kuwait and 1 from Greece. The ships are carrying human rights activists, doctors, journalists and MPs in addition to 10,000 tons of humanitarian aid cargo including medical supplies, medicines, cement, iron bars, precast homes, toys and food aid.