Aid to Ten Thousand Families in Arakan
With the support of its charitable donors IHH Humanitarian Relief Foundation reached out to 10.000 Rohingya Muslim families in Arakan. Fifty thousand people will benefit from the aid that has started in March and will continue through April.
Arakan, South Asia, Myanmar 22.03.2017

Majority of Muslims in Arakan are living in isolation from the society. Muslims who are not given ID cards are denied access to education and healthcare. They are forced to live in villages, camps and isolated areas and are not allowed to step out of the area without special consent.

Aid to Thousands of Families

IHH delivered its first round of relief aid sponsored by donor organizations and charitable people to Arakan Muslims who are living in especially difficult conditions. IHH distributed aid to 415 families in Katinpide  Ywar  Cyi village off Arakan’s capital Sittwe, to 290 families in Katinpide Ywar Chay village and to 380 families in Thinganet village. The food hampers contain rice, cooking oil, lentil, salt and dry peppers and provide for the food of a 5-person family for a month. Moreover in Mav La Wi Chan village hygiene kits were distributed to a hundred families.

Building Homes for Families Returning from the Camps to their Villages

Meanwhile 140 houses are under construction for the families who managed to return to their village from the camps. The houses will provide a comfortable place for the family to live in the region. Seventy four families are living in Kone Sone 2 village including those who returned from the camps. Nineteen out of twenty two houses planned already are completed and handed over to the needy family concerned. The remaining houses are still under construction in other villages in the area.

Siddiq Family Gets His House Soon

Abu Bakr and Somida are struggling to survive in a one metre high ten metre long house with their five children. They are one of the families who managed to return home from the camps. The foundation is laid for their house and they will soon have a comfortable abode. The head of the family is able to work only four months a year in a brick factory that pays him two dollars per day. This is their only source of income. The father of five children expressed his heartfelt thanks to donors and Turkey for their support.

Let Not Your Children Grow Up to Be Beggars

43-year old Abdurrahim Abdulhakim who is the head of the Thet Ke Pyin Old camp expressed his concern about the future of the children of one thousand families who are currently living in the camp.

Abdulhakim noted that they have no freedom in the camp where they live. “We are living as captives in this camp he said. We are not even allowed to step out of the camp. We cannot go out to work and earn a living for our children and families. Unfortunately our children and we just wait for a helping hand that will reach out to us. Our children started chasing people who visit the camp from outside. I abhor the idea that they will grow up to be beggars. The ratio of young and children under 18 is more than half of the camp’s population. We are relatively safe now but we do not know what might happen in the future. We are living in fear; that radical Buddhists would one day come hunting down us. Although there are 150 ethnic groups in the region only Muslims are targeted in these racist assaults which signifies that they want to wipe out Islam in this soil.”

Arakan Muslims living with no IDs

Arakan Muslims do not get an ID as they are not regarded as citizens by the government. Hence they do not have access to education and healthcare. Moreover they are forced to live in confinement as they are banned from leaving the territory where they live. Those, who have to go somewhere, seek special permission from local authorities or else they have to pay heavy fines. Muslim families who wish to buy livestock to earn a living are required to pay tax to the government. Muslims are unable to go to the market to buy their needs, as it is too dangerous for them to mix with the racist Buddhist crowd. Therefore the community leader goes to the market and buys their needs with military truck. Although locals are a bit happier that the violence in the region subsided a bit their anxiety for a potential attack risk never ceases.

A Captive Life in Camps and Shelters Under Construction

Children Educated on Soil without School

In Kone Sone village off Arakan’s capital Sittwe dozens of children are trying to get education on thin plastic spreads laid over soil. These poor souls are trying to learn through memorizing the things written on board because they do not have books, or notebooks. So they are waiting for a helping hand that will reach out to them. Without any textbooks or learning materials children in the region are trying to get education by writing on the board they found with their teacher, Jasmine who comes from another village to teach them. She is an ambitious one who tries to teach the children Maths meanwhile uplifting their spirits. 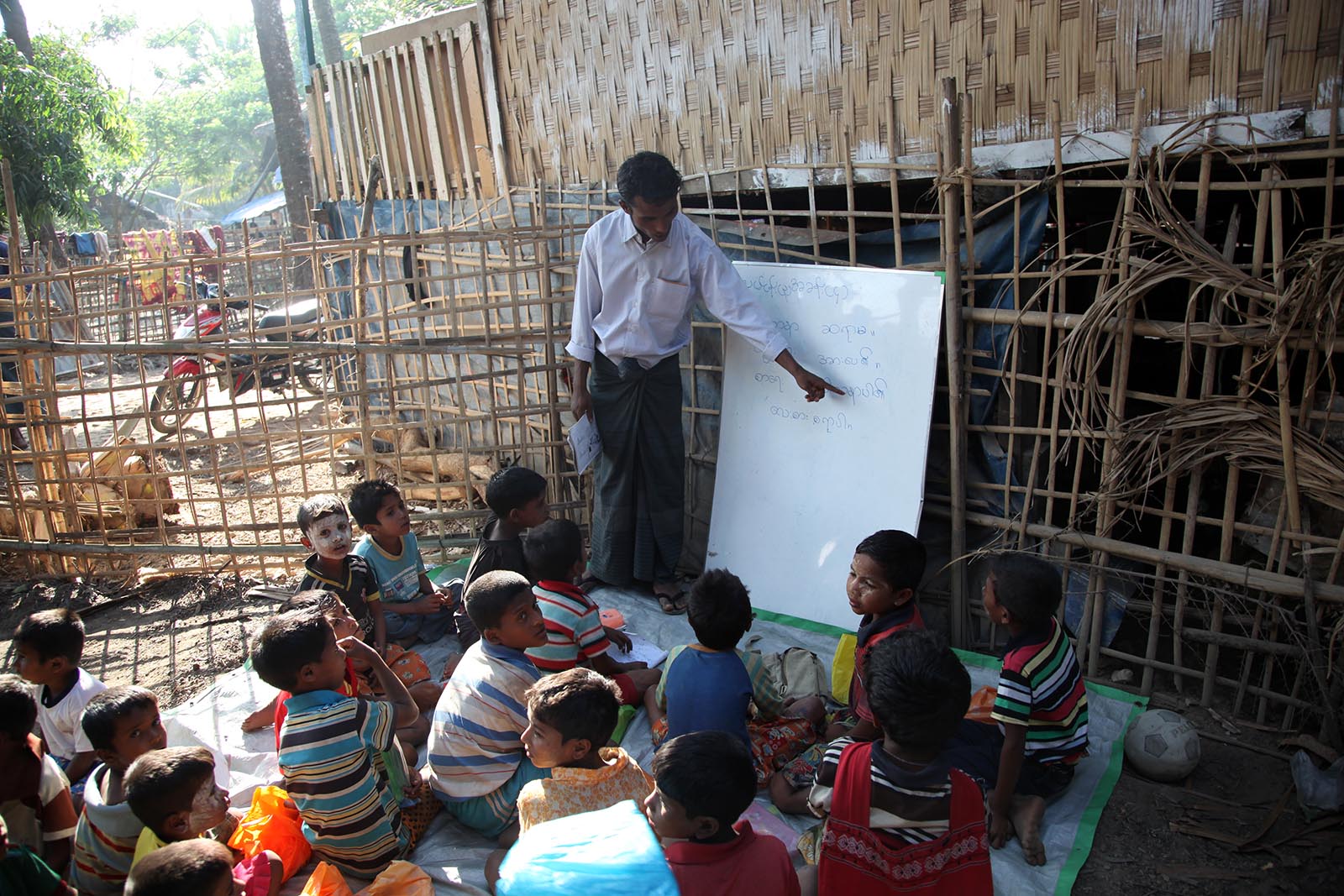 People in the camps and villages that we have visited are living in squalor in very harsh conditions. There is no electricity in the region. Only a couple of families have solar panels by which they are trying to put lights on at night.

Burned Down, and Surviving Mosques

Majority of mosques in Arakan where Muslims are holding prayers are either burned town or damaged in the past. Mosques in the region especially those closer to the city center are burned down during the violent attacks carried out against Muslims by racist Buddhists against Muslims. Even 300-year old mosques are burned down. Only a few mosques stand in the region. One of them located in a village dates back to 1833.

Around 900 families are living isolated in Aung Mingalar area, which is locked out from life through barricades in Arakan’s capital Sittwe. Four thousand two hundred eighty Rohingya Muslims are living in the region where they try to get together in the local mosque and perform their prayers in congregation. They are living in confinement surrounded by police and soldiers. They cannot at all leave their area without getting official consent although they are actually in the city centre. 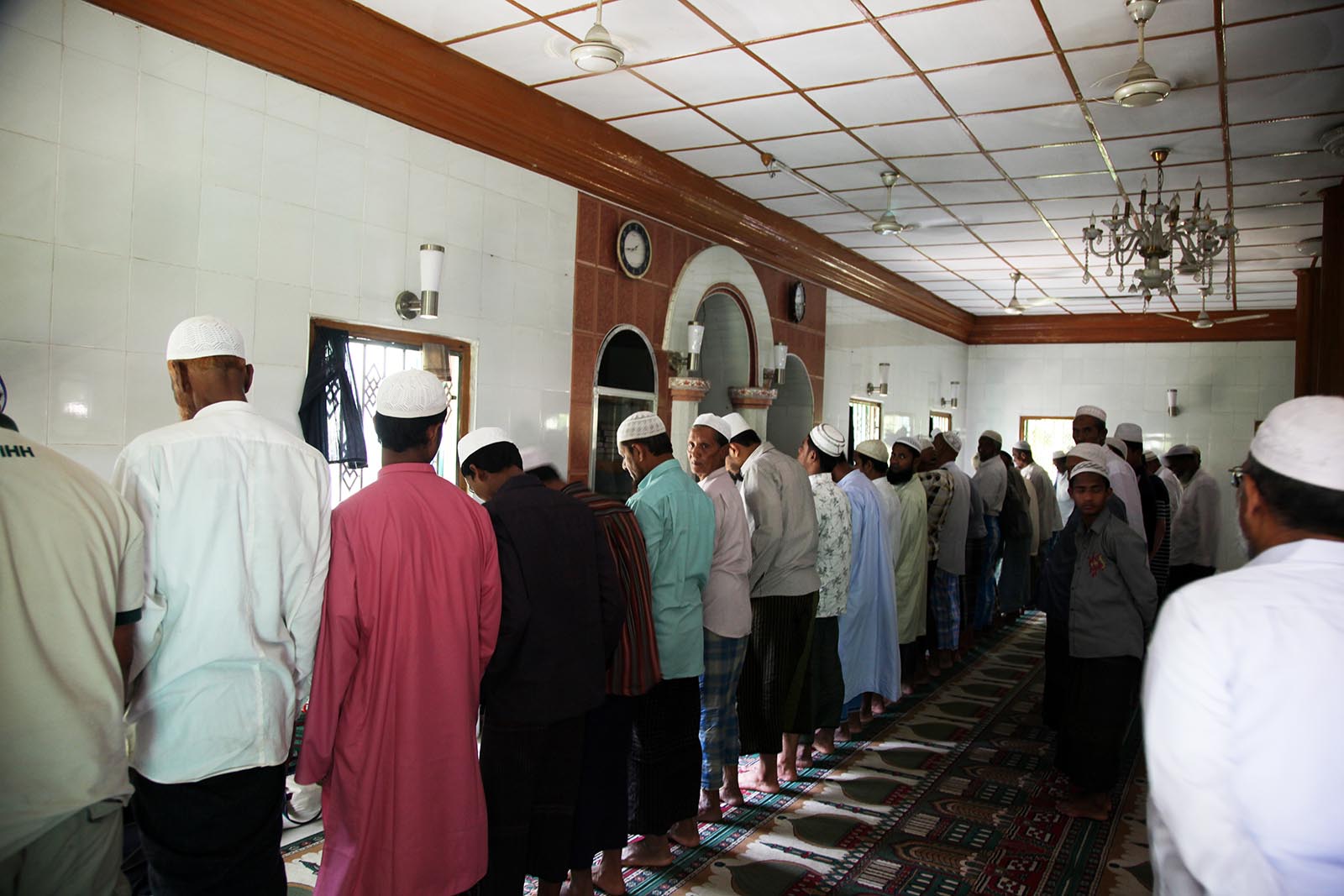 1947/48 marks the tragic fate of Rohingyas in modern times along with the Sub-continental India. After the British colonial rule left the region with lots of problems Arakan became a part of Burmese union that announced its independence around that time. Since then Rohingya Muslims in the region became oppressed and persecuted based on their ethnic and religious identity by radical racists in the region.

This community, which is forced to live in the most unimaginably horrible conditions and suffering the most abhorrently inhumane treatments, is announced as the most severely persecuted community in the world by international organizations. However neither international community nor Myanmar government has an intention to put the things right for them.

The oppression by Buddhist radicals that started in the 90s and escalated in 2007 and 2012 is heard in the world. The international community was anticipating improvement in the conditions of Rohingya Muslims but Aung San Suu Kyi who came to power in 2012 dashed these hopes and showed that she is not going to change the policy about Muslims which pushed them into further despair.

Arakan Muslims who are locally called as Rohingyas made it to the headlines with tragic events again. In October 9, 2016 nine security officers were killed during the attacks carried out against nine security centres in Rakhine region where Rohingyas predominantly live. Although it is still unclear who is the culprit of the attacks violent operations targeting the areas where Muslims predominantly live were launched. Tens of thousands of Muslims had to flee their homes due to the operations.

Hundreds of thousands of Rohingyas are forced to live in the places akin to concentration camps without ID cards. In March 16, 2017 former UN secretary Kofi Annan made a live phone call to the official meeting held in Yangon, a major city and advised Myanmar government to solve the issue of Rohingyas and allow them to return their homes. Three days after the meeting Buddhist radicals in the region held a demonstration that asked the government not to give Muslims any IDs.