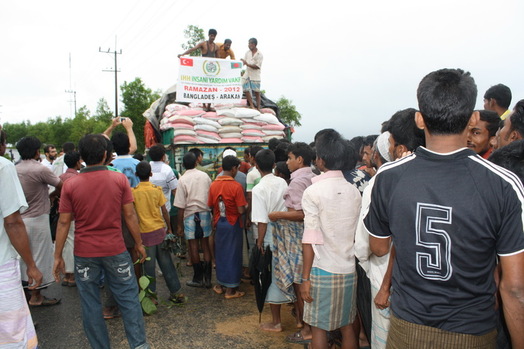 Food aid sent by IHH Humanitarian Relief Foundation to the Arakanese Muslims who had fled Myanmar and sought shelter in Bangladesh has reached the camps.

Muslim Rohingyas who had fled to Bangladesh to escape violence in Myanmar formed long queues to receive aid being distributed by IHH.

IHH Humanitarian Relief Foundation has been helping the Muslim Rohingya refugees who left Arakan state of Myanmar through illegal ways to save their lives and sought refugees in neighboring Bangladesh.

IHH aid teams, who had previously built water wells and distributed food and emergency aid in the Arakanese refugee camps, visited the camps in the city of Cox’s Bazaar as part of Ramadan relief efforts and delivered food aid.

The refugees who were given cards beforehand to receive aid formed long lines at night. Men, women, children and elderly people that had not had hot food for days waited in line to receive supplies of rice.

Purchased with donations from Turkey, the 240-ton rice was brought to the camps in trucks early in the morning.

Muslim Rohingyas who waited in line under rain shower were provided sacks of 10kg rice and headed for their cottages. The Bangladeshi police tried to control the crowd as there were intermittent stampedes.

In addition to food supplies, Rohingya refugees also need tarpaulin covers to watertight their shelters as well as medicine and medical treatment.

Said Demir, IHH Aid Coordinator for Myanmar and Bangladesh, reported that they had delivered 10kg of rice to every Muslim family that has fled Myanmar for Bangladesh. He noted that aid deliveries to the camps would continue throughout Ramadan, adding "We distributed 240 tons of rice today. We are hoping to provide every family with food to suffice for two months in Ramadan."