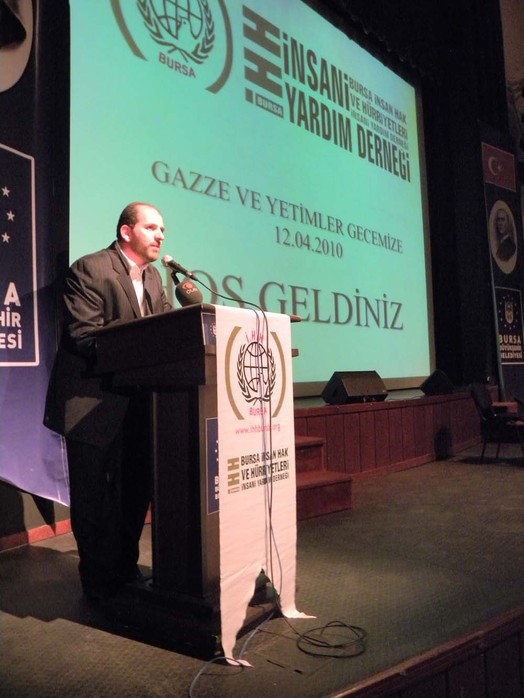 Volunteers in Bursa showed their support to IHH’s flotilla campaign to break the embargo on Gaza. They organized a night of fundraising called “Night for Gaza and orphans”.

Huseyin Kaptan, Head of Humanitarian Aid Association in Bursa, gave an opening speech asking for support from the people of Bursa for the “Palestine Our Route, Humanitarian Aid Our Load” campaign. Kaptan, also mentioned of the water wells and cataract surgeries funded by the beneficent and that the number of the orphans funded by the benevolent people of Bursa has hit 750.

Muhammad Savalha, who arrived from Europe recently, Head of European Committee Against the Embargo, also gave a short speech. Savalha said “We will be breaking the embargo onboard arriving from European countries. There are millions of people in Europe who are well aware of the situation in Palestine and support them. This shows how isolated Israel became.”

Bulent Yildirim, President of IHH, reminding of the recent 200-vehicle convoy to Gaza, noted that they will now embark on a journey to break the embargo by the sea. Yildirim also said that people from all walks of life and of diverse backgrounds give their support to the campaign, emphasizing that Muslims should feel burdened with more responsibility than the rest.

3 scarves signed by Ismail Hania, the Prime Minister of Palestine, were auctioned during the event, which were brought by volunteers of Bursa from Gaza during the vehicle convoy. A benefactor, a public employee who lives on a limited wage, paid 4.500 Turkish Liras of his savings for a scarf. The other two scarves were sold for 5.000 and 8000 Turkish Liras. At the end of the fundraising event, Omer Karaoglu, a young artist of Islamic music, gave a concert followed by prayers cited all together.