Cauldrons cooking for Pakistan
The IHH is carrying on relief efforts to alleviate the suffering of flooded Pakistan. Food cooked in large cauldrons in Islamabad is delivered to flood victims. Each day 5,000 persons are given hot fo
Pakistan 19.08.2010 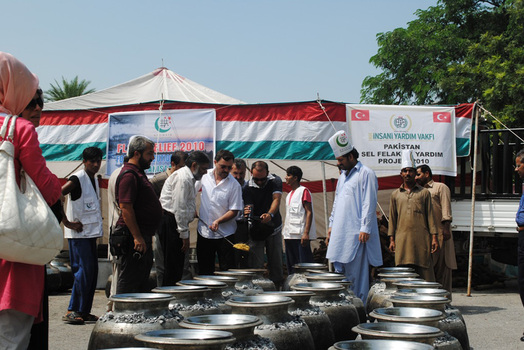 Pakistan entered Ramadan as injured by devastating floods. In the country, where 2,000 have been lost to the floods and six million have been made homeless, people have tied their hopes to external aid.

The food cooked in cauldrons in the capital city Islamabad is urgently transferred by IHH aid workers to Muzaffarabad, Rawalpindi, Haripur and other affected regions.

Five thousands victims are given hot food daily. Meanwhile, aid workers are also distributing food packs and clothes to needy families. Pakistan, where almost 30 million people and infrastructure have been affected by the floods, is calling for help from Turkey.

Kashmiri leader Raja Zulkarnain presented a plaque of gratitude to the IHH for its emergency aid activities in the flood region.

The foundation is collecting supplies of baby formula, medication, foodstuff and textile products for a cargo plane to be sent to Pakistan.

Yaşar Kutluay, IHH executive in charge of emergency aid, called on benevolent businesspeople for donations to make cargo plane ready for take-off. He also noted that a group of physicians would accompany them to Pakistan.