Families of flotilla martyrs call for lifting of Gaza siege
Families of the nine peaceful activists who were martyred on May 31 when Israeli commandoes attacked on Mavi Marmara international flotilla, which was taking humanitarian aid to Gaza called Israel to
Palestine, MiddleEast, Turkey 07.12.2010 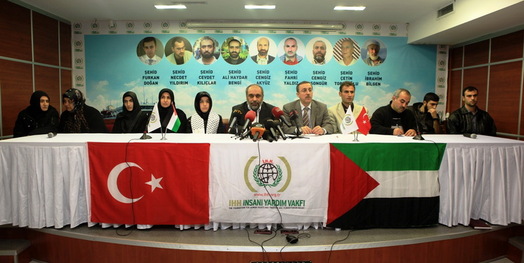 Martyr families said the Mavi Marmara incident cannot be covered up only through Israel’s offering an apology and paying compensations for the victims. “Our relatives became martyrs for the sake of removal of the blockade on Gaza. Our hearts will be consoled if only the blockade on Gaza is lifted.” 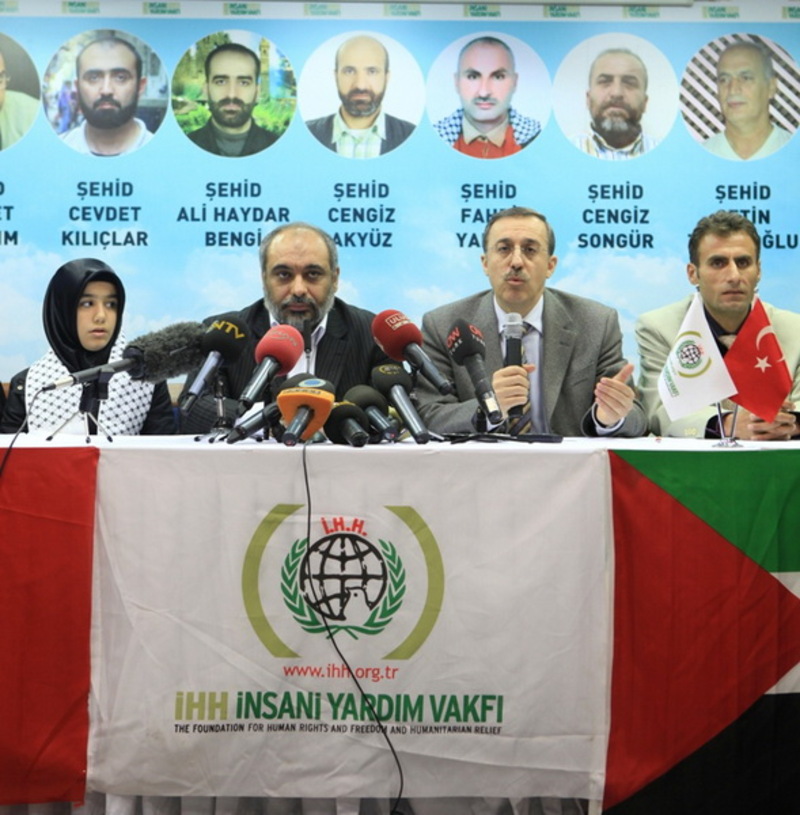 Last week, Turkey put aside tensions in diplomatic relations with Israel, and under orders by Prime Minister Recep Tayyip Erdoğan, rushed to send fire fighting aircraft to assist in the battle against Israel’s biggest-ever fire that has killed around 40 people. Following Turkey’s move, it is said that Turkish and Israeli relations will enter a period of reconciliation and Israel will offer an apology to Turkey for the Mavi Marmara attack and pay compensations to the victims. As the most important parties of the case, martyr families voiced their demands and expectations about Israel at the news conference.

The martyr families said they were offended by Turkey’s sending fire fighting aircraft to Israel and asked why Turkey did not send any aircraft while the Mavi Marmara ship was being attacked by Israeli soldiers in international waters.

A symbolic apology and compensation unacceptable

Associate Professor Ahmet Doğan, father of Furkan, said a symbolic apology and compensation to be offered by Israel would not be sufficient alone.

Noting that his son sacrificed his life for the elimination of the blockade on Gaza, he said: “ My son was on that ship for the lifting of Gaza siege. He had only one goal: to take humanitarian aid to Gaza. He became a martyr for the sake of this goal. An apology will not make us forgive Israel.  If Israel is to offer an apology, this should not be a symbolic one. As far as I understand, they will not make a sincere apology. It seems as if they will offer a symbolic apology for the attack. We can never accept such an apology.” 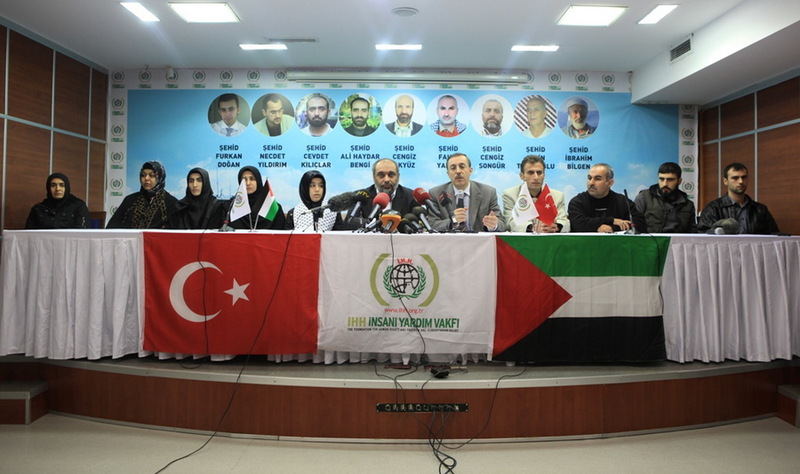 A compensation not a price for the blood of martyrs

About the compensation that needs to be paid to victims and martyr families by Israel, Doğan said: “It will be wrong to see a compensation to be paid by Israel as a price for the blood of the martyrs. As far as I follow Israeli press makes mention of a little sum of a compensation. As martyr families, we do not need the money that will come from Israel; however, paying a compensation is a part of the punishment that Israel should be given. The amount of the compensation to be paid by Israel should be a very large sum that will hurt it. We are not playing a game here. Israel committed a big crime which cannot be covered up by a symbolic apology or compensation. What Israel did was a massacre, willful manslaughter and brutality. We expect it to confess to having committed this crime.”

About the fire fighting aircraft that were sent to Israel by Turkey, Doğan said: “Sending of the fire fighting aircraft to Israel is the right thing from a humanitarian and Islamic point of view; however, we have been offended by this move. We have been a little bit saddened. These are just my personal emotions. At the end of the day, we are humans and have emotions. Although bureaucracy and diplomacy are done free of emotions, we would expect our emotions to be taken into consideration.”

Those soldiers should be tried

Martyr Kılıçlar’s wife, Derya, also said Israel’s offering and apology and paying compensation for the victims will not be sufficient to close the Mavi Marmara attack case.

“What Israel did is exactly a massacre. The perpetrators of this attack should be punished. Just as when people commit crimes, they are tried; Israel should also be tried for the crimes it committed. We want the trial of the Israeli soldiers who committed the massacre. And we want the removal of blockade on Gaza.”

About Turkey’s sending fire fighting aircraft to Israel, she said: “Turkey’s move to send fire fighting aircraft to Israel saddened us. I really wonder why not any aircraft were sent to Mavi Marmara on the day of the attack. I offer my thanks to Prime Minister Recep Tayyip Erdoğan and Foreign Minister Ahmet Davutoğlu. Our prime minister has showed an unprecedented attention to the plight of Palestinians that no other Turkish prime minister has showed; however, this is not enough. The blockage on Gaza should be lifted.” 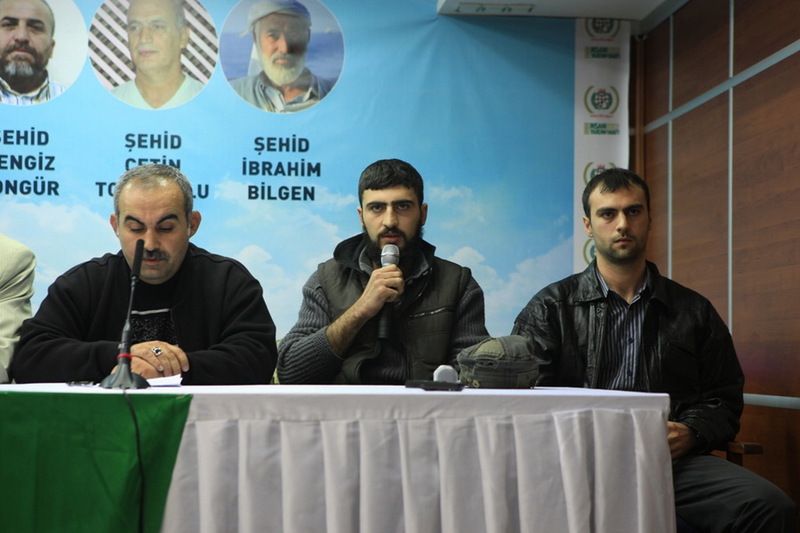 We were deeply hurt when Israel awarded medals to its soldiers

Wife of martyr Yıldırım, Refika said although she has been going through difficult days since the killing of her husband, she is very proud of being the wife of a martyr.

“Our husbands took part in the aid convoy to win Allah’s sake. When Israel gave medals to soldiers who raided the Mavi Marmara, we were hurt once again. Our hearts will be consoled when we see that the perpetrators of this attack are punished properly and when the Gaza blockade is lifted. We want our demands to be fulfilled,” said Yıldırım.

Çiğdem Topçuoğlu who was on board the flotilla with her husband said: “My husband was martyred just next to me. I closed his eyes with my own hands. This is a case of which I am proud. My heart is burning like the forests of Israel. If the Turkish aircraft sent to Israel to help extinguish its forest fires, had been sent for our help, we would perhaps be suffering less now. But we were left alone there.”

Muhammed Ensari, brother-in-law of martyr Bengi, also called for the removal of Gaza siege, saying that this will be the only thing that will console his heart.

Martyr Yaldız’s brother Hasan said: “My brother had only one goal, which was to build a park for the orphans in Gaza. I want to see that park.”

Songür and Bilgen also called for the removal of Gaza blockade in addition to Israel’s offering an apology and paying compensation for the victims.

Yıldırım: Israel should pay a large sum of compensation

For his part, IHH President Yıldırım said Israel should pay a large sum of compensation for the victims, offer an apology to the families of the victims as well as to Turkey and to the entire world and it should immediately remove the blockade on Gaza. Yıldırım also said a new flotilla that will be sent to Gaza on 31 May 2011 should see that the blockage is lifted.

Noting that Israel is currently making some efforts to normalize its relations with Turkey, Yıldırım said: “At this news conference we would like to share the way these efforts are perceived by us as well as our expectations and the expectations of the martyr families from Israel.”

Stressing that Turkey has stood up for Turks and others on board the Mavi Marmara, Yıldırım offered his thanks to all the state officials who supported the Mavi Marmara being mainly President Abdullah Gül, Prime Minister Erdoğan and Foreign Minister Ahmet Davutoğlu.

“We were very honored by the stance they took against Israel. Israel was already placed into a difficult position due to this attack and released us immediately in order to save itself from international pressure. It sent our ships months later. They gave great damage to our ships and their engines. Now, they say they will offer an apology and pay compensation. They will do this. In return, they want relations with Turkey as they were before.”

Yıldırım recalled that a report prepared by the UN Human Rights Council about the Mavi Marmara attack found out that Israel committed willful murder on the flotilla.

“The report found that Israel violated international law and human rights by committing heavy crimes such as willful killing, torture and maltreatment of persons, violating persons’ physical integrity rights, detaining and arresting persons arbitrarily, confiscating persons’ belongings and restricting freedom of expression. While it committed so many crimes, what will be the punishment that will be given to Israel? When one kills a person in Turkey, does anybody say let the murderer pay compensation so that he/she can escape trial. Those who committed and masterminded the murders need to be arrested and tried. Furkan’s father will go to the United States and file a case against Israel there because Furkan was a US citizen. No lawsuit has yet been filed against Israel in Turkey. When I took a look at the newspapers yesterday, I saw news saying that Israel will offer an apology to the families of the martyrs and pay compensations for the victims. It is said that the compensation Israel will pay will be between $50,000 and $200,000. If the compensation amount remains so little, this will not mean that Israel has paid any compensation.”