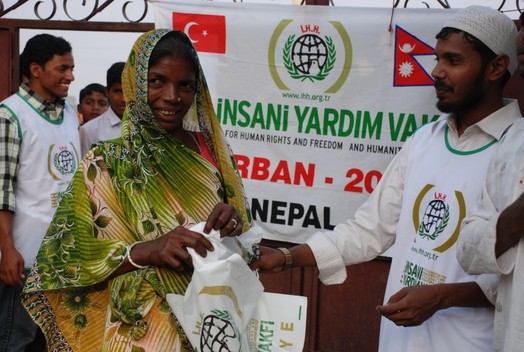 In Iran, 252 Qurban shares were distributed to 1,800 families in the cities and regions of Tehran, Qudus, Baluchestan, Zahedan, Saravan, Iranshahr and Chabahar. Certain Iranian madrasahs, mosques and orphanages were given cash donations.

The IHH slaughtered 50 small heads of cattle and 50 large heads of cattle, totally 400 shares, and distributed their meat to needy families in Nepal, where about two million Muslims live. The Qurban slaughter in Rajbiraj town drew a huge turnout from Nepalese Muslims.

The IHH had previously offered monetary contribution to the project of translating the Quran into the Nepalese language.

In Pakistan, sacrificial slaughters were carried out in regions with high refugee concentrations. About 2,100 Qurban shares were distributed in Rawalpindi, Haripur, Rara, Kashmir, Muzaffarabad and Skardu. People who had fled from the conflict area Swat valley and Afghan refugees in Peshawar were also given Qurban meat.

In Afghanistan, 96 large heads of cattle were slaughtered and their meat was distributed to the poor and displaced families.

The IHH officials distributed meat of 60 large heads of cattle to Palestinian refugees who have lived for three generations in Lebanese camps such as Nahr al-Bared, Baddawi, Shatila, Burj al-Barajneh, Katermaya, Ayn al-Hilwah and Mieh Mieh. Toys and clothes were also distributed to 80 orphans.

An IHH team visited impoverished southeastern Asian country Sri Lanka, where Muslims form eight percent of the population. The team slaughtered 53 large heads of cattle and distributed their meat to needy Muslims. Victims of the latest tsunami and the internal armed conflict were also given a hand.

Eid in the Balkans

The IHH held Qurban organizations in Bosnia-Herzegovina, Macedonia, Albania, Sandzak (Serbia and Montenegro) and Kosovo. In Bosnia, 130 Qurban shares were distributed to 1,000 families of those killed in the Bosnian war in the capital Sarajevo and Gorazde.