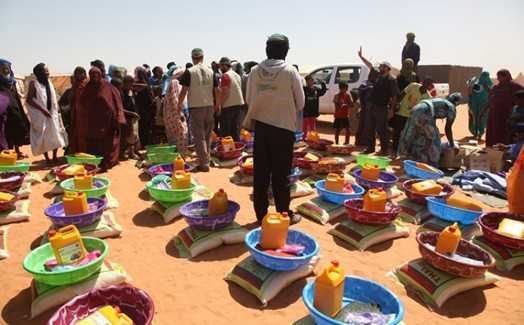 Following a military intervention by France in the north of Mali, IHH teams have gone to the region to determine the needs of Malians who took shelter at Mbera Refugee Camp and carry out relief efforts.

Entering the Mbera Refugee Camp on Mauritania-Mali border, IHH has been the first independent institution which has carried out relief efforts at the camp other than the United Nations.

IHH emergency aid team which reached the region last week first visited the United Nations Office in Bassiknouand had a meeting with the officials there.

Later, the aid team visited the camps to determine the needs of the refugees. In the first step, emergency aid items such as rice, cooking oil, textile products, slippers, washtubs were delivered to the refugees and 37 cows were bought to be slaughtered for them. The delivery of emergency aid items at Mbera Refugee Camp began on March 21.

In the second step, delivery of other food items such as dates, sugar, tea and pasta, will be made by IHH teams at a time determined by the UN.

Tension in Mali, which neighbors Mauritania that has been witnessing demonstrations due to the influence of Arab Spring for the past one year, has risen significantly over the past days due to the civil war. Mauritania, which is in a poor financial situation, cannot afford to meet the needs of the Malians who have taken refuge in the country. The living circumstances of the refugees get worse each and every day because they cannot receive aid from outside as the Mauritanian government accuses foreign non-governmental organizations of supporting the opposition in the country.

The number of Malians who have taken refuge at Mbera Refugee Camp has exceeded 80,000 until today. Around 500 refugees continue to flock to the camps every day fleeing the bombardments of France in their country.